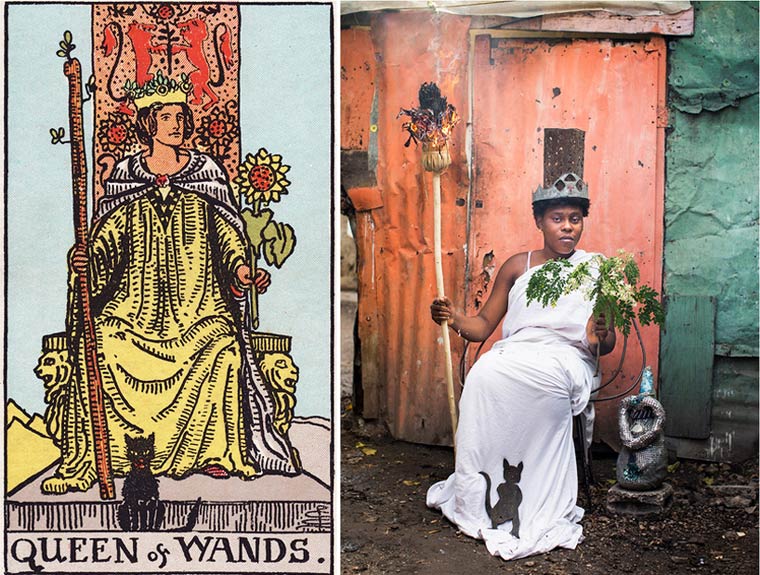 Colorful, provocative, and avant-garde, this is how the Belgian photographer, Alice Smeets, presents her project ”The Ghetto Tarot.” In this collection, she teamed up with local Haitian artists to recreate the surreal illustrations of an old tarot deck. The idea behind this project is not to glorify the ghetto and poverty, but to alter the perception that people can have about those living in extreme poverty. We had the chance to ask Smeets a few questions about her relationship with Haiti and its people, the many challenges she faced, her perception of poverty, and finding happiness in the slums.

Lola Who: What inspired your project the “Ghetto Tarot” ?
Alice: About six years ago, I documented the modern witchcraft movement in Europe, and the host of a Tarot workshop, at the Far Away Center in England, gave me a Tarot deck as a present. I have been fascinated by it ever since. I have wanted to photograph the Tarot deck for a long time now.

The scenes of the Ghetto Tarot are inspired by the traditional Rider-Waite Tarot deck and are replicated together with a group of Haitian artists called Atiz Rezistans (meaning resistant artists) in the Haitian slum, using only material that could be found or created locally.

Taking ordinary pictures of the Tarot scenes seemed too simple. My aim was to create a very personal deck without losing the different spirits of the cards. So during a yoga session, the idea came to my mind to combine three of my passions: the spiritual world, the Haitian culture, and the philosophical reflections about the dualities in our world; in this case the rich and the poor. So, taking pictures in the ghetto of Port-au-Prince, Haitis capital, was the obvious choice to create a very personal deck that would illustrate the spirits of the cards with a touch of humour.

Lola Who: What’s your relationship with Haiti and its people?
Alice: The first time I went to Haiti was eight years ago. I was 19 years old at that time. I dont really know what drew me to Haiti, but I’ve always trusted my gut feeling and it was telling me that this island was a place for me to discover. And from the first day that I stepped on that island, it fascinated me. But at the same time, I had so many questions, and each trip, I answered one more question… Today, I consider Haiti to be the best professor I have ever had. I’ve learned so many lessons in this magical place.

Lola Who: How did you meet the people that made this project come to life?
I met Atis Rezistans during their second Ghetto Biennale in 2011. I became friends with some of the artists, and we stayed in touch ever since. Every two years, Atis Rezistans invite Western and non-Western artists to their home to create art together and present a collaborative show at the end. Atis Rezistans use garbage to create art with their own vision, and that’s a reflection of the beauty they see hidden within waste. The idea was to portray a more creative aspect of the Haitian reality to counterbalance the current, dominant negative portrayal of the country.

Lola Who: What challenges did you face during while you were preparing and doing the project?
Alice: The most difficult part of this project was the heat, the dust and the fatigue that comes with working under such circumstances.  Moreover, we encountered difficulties when we went to places where people didn’t know us. Some Haitians believed that people wanted to harm them with dark spiritual practices. Obviously, the artists and I had nothing like that in mind, but we had to be careful of what we told people to avoid misconceptions. For example, when we photographed the three of Pentacles” in front of a Catholic church in Cité Soleil, the poorest slum of the country, we told people that we were imitating the scene of Maria, Joseph and Jesus instead of explaining the Ghetto Tarot project.

Lola Who: Why did you decide to name your project the ”Ghetto Tarot” and do you think it’s demeaning to the people of Haiti?
Alice: The name of the project is inspired by the “Ghetto Biennale.” Atis Rezistans are claiming the word ghetto, freeing themselves of its depreciating undertone and turning it into something beautiful. In appropriating this term, they are altering the meaning of the word ”ghetto,” and that is very inspirational.

In Haiti, ”ghetto” means life in the slums. It means living in poverty. But “ghetto” also means community, family, solidarity, strength, and a richness of creativity. Therefore, its not demeaning to the people of Haiti. Our intention is not a glorification of life in the ghetto, but to feature the ghetto in a different light.

Lola Who: What is your perception of poverty?
Alice: I have observed that those referred to as “the poor” are full of strength, life, joy and creativity. I believe we need more people in this world to start looking at them that way, and stop seeing them as victims of a deserted and hopeless place.

For generations, Haitians have witnessed people telling them that they are poor and that they need Western “solutions” to their problems, and many have associated themselves with this idea. But the world has to start looking at their skills and capacities instead of their deficiencies. Our objective was to highlight the creativity and strength of these people, because we are certain that inside each of them lays a treasure of ideas that can dissolve the circle of dependence and victimization.

Our idea with this project is to provoke a discussion around the topic of poverty; to have people question their own assumptions about what poverty and the ghetto really is, and to change the negative connotation that the word often implies in our culture.  That played an important part in the “Ghetto Tarot” project: reaching beyond cultural walls of prejudice and ignorance, and achieving a much-needed transformation of the collective conscience.

Lola Who: What do you want the public to learn with the Ghetto Tarot?
Alice: I noticed that the stories they represent are calling to the emotions of many viewers. They either create excitement about the beauty that is captured in the middle of the ghettoand about the fact that the Tarot cards came to lifebut they can also trigger anger and frustration. I hope these photographs will make the public aware of their own sentiments.

Lola Who:  You used Indiegogo to fund your project. What advice would you give young photographers on creating a successful crowdfunding campaign?
Alice: The most important thing is to put all your heart into your project. Start with what you have and dont worry about financing and the future. Create art because you feel inspired and not because you want to make money. From personal experience, that  mindset is crucial for the success of artists in general. Then, if you want to proceed with your project and use a crowdfunding site, it’s important to use your personal network for the first week, and then reach out to the media. For example, I sent random emails to photography blogs. It’s important to find people that share your enthusiasm for your work.

Lola Who: Finally, what have you learned from this project?
Alice: While always feeling compassion for the people living in very poor conditions, I learned that no matter what your living circumstances are, your happiness depends on things other than material wealth. It’s about community, belonging, finding your purpose in life and spiritual growth. Poverty is always relative, its definition lies in the eyes of the observer. Poor people are just like us, just in a different kind of situation. Many of us, including me, in the so-called first world, had or still have lost many of those important aspects in our lives. I’m thankful for all the Haitiansand apparently the poor peopleI have met on my journey for teaching me those valuable lessons.

If you enjoy this project, support Alice Smeets by giving her a donation. All funds will allow the Smeets to complete and promote her project.