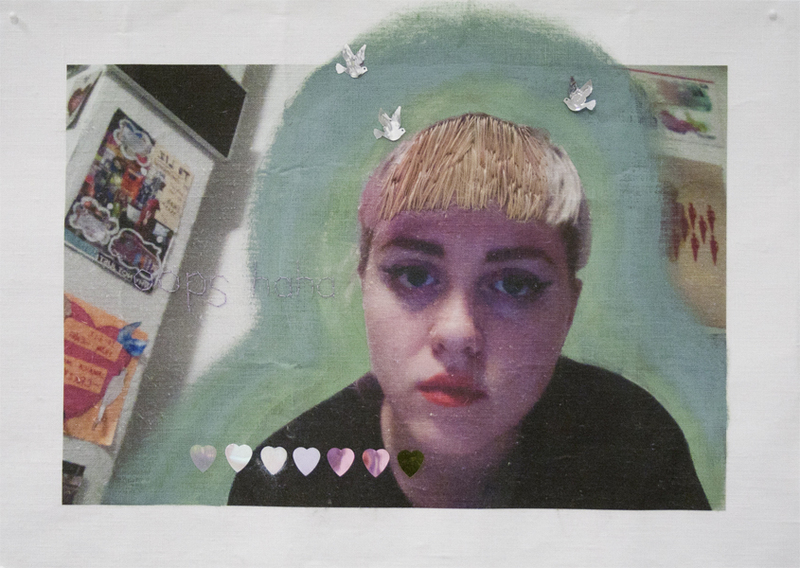 Liz Barr is a multi-disciplinary artist and art student living in Philadelphia.  Her artistic interests include the concept of relationships and the politics surrounding so-called selfie culture. She also works as a freelance designer for local bands and clubs. We caught up with Liz to find out more about her thoughts on celebrity culture and religion, and the implications of the ‘selfie culture.’

Lola Who: Hi Liz, can you tell us a bit more about yourself and what projects you’re working on at the moment?
Liz: This past year or so, the work I’ve been making has dealt with social media, selfies, craft, celebrity, religion, and all the ways they relate to each other in my life. One of my main projects was making lenticular prints that I mounted in vanity mirrors. My most recent projects have been dealing a little more with the body and ritual. These projects arent in their final form yet, but I’ve been experimenting more with performance, casting, and sculpture. Lola Who: How does it feel to be a 21-year-old art student?
Liz: I’m actually 22 now! I’m always learning new things. I feel really young and like I’m growing all the time. It’s a scary time because nothing feels stable. I’m graduating in May, and I have to make a lot of decisions about my future, like right now. But it’s also an exciting time. I feel really inspired watching what other my age are doing. Lola Who: One of your main areas of interest is the issue of interpersonal relationships. Where do you think this interest stemmed from and do you think this influences your actions in daily life?
Liz: Since high school I’ve been really interested in the power dynamics in relationshipsromantic ones, as well as friends and family and what makes relationships healthy, toxic, or abusive. I think this interest came from watching the relationships my friends were in, and having friends talk to me about the unhealthy and even abusive relationships they were experiencing. I learned a lot about identifying abusive behavior and evaluating my relationships with people. In my first years at college, I was really involved with activism and advocacy around domestic abuse and sexual violence on campus. Lately, I’ve also been thinking a lot about the idea of unconditional love, especially in the contexts of family and religion.

Lola Who: Your art explores the idea of selfie culture. What do you think selfie culture says about the world we’re living in now, and how  it affects the way that we interact with one another?
Liz: I think the ‘selfie culture’ says a lot about the world we’re living in now. Within it, we see marginalized people claiming autonomy over their bodies and the way theyre represented through self-imaging. For example, womenas a very broad categoryhave historically always been depicted in art and culture by men, and now women have the agency to create images of themselves and widely distribute them. Marginalized people can create representations for themselves on social media through sharing selfies. I’m thinking of Blackout Day for example. However, selfies are also commodified. They are given value through a currency of likes. They can also be literally bought and sold by companies that want to advertise through popular Instagrammers. Theres also the ways that surveillance intersects with selfie culture, like the fact that data is being mined, and facial recognition software are being developed through social media and selfies. I think the implications of selfie culture are changing every day. Lola Who: A lot of your art involves self-portraits. What is the significance of self-portrait in building and discovering your identity?
Liz: I use myself in my work because most of my work is personal, and also because I’m always available to myself. I think self-portraiture is more about expressing myself and my identity than discovering it. But I suppose theres an element of self-discovery in self-expression, too. Lola Who: In your series called “Objects,” you morph into Kim Kardashian and baby Jesus. Can you explain that duplicity and what those icons represent, and basically why you morph into them?
Liz: In my Vanity series, I’m exploring the ways social media mediates our relationships to others and ourselves, and the ways that expressions of the self are filtered through layers of screens and imagery. Im also interested in how the genuine and the absurd are butted up against each other on sites like Tumblr. Conversations about pop culture, politics, mental illness, and memes are all had in the same place, sometimes even in the same post. In the series, I align myself with both Kim and the Virgin Mary, two very different but very prominent symbols of womanhood. I’m interested in the similarities between celebrity and religion and the ways they affect my identity and self-perception.

Lola Who: A lot of your work is also centered on the topic of love. Can you tell us why love is so important, and do you believe in one true love?
Liz: Well, I guess I’ve made work about love because I am in love. I’m a pretty romantic person, and I like making work for and about my partner. That’s been less of a focus in my more recent work. And I don’t know about that one true love stuff. I think relationships are much more complicated than that. There are also lots of different kinds of love, and theyre all important. Love for friends isn’t any less significant than love for a romantic partner.

Lola Who: Your work is very multi-disciplinary. Do you think it will continue in this way, or are you currently leaning more towards one medium?
Liz: I think Ill always be a multi-disciplinary artist. There are certainly some media I lean toward more than others, but I generally let my ideas determine the media I use for a project. I’m always interested in learning processes of making, too. Overall, I use a lot of photographic imagery, but I often combine it with sculpture, printmaking, zine-making, etc.

Lola Who: How does your art play out in the context of the current feminist movement?
Liz: That’s a big question. I guess I would say that all of my work is informed by my own ideological beliefs, whether it is explicitly political or not. I don’t think my work necessarily has any bearing on current feminist art movements, but it is all influenced by feminist discussions and ideologies. Lola Who: Finally, what’s next for you?
Liz: Well, in the short term, I’m working towards building a thesis project and then graduating, but as for what comes after that, I’m still trying to figure that out!