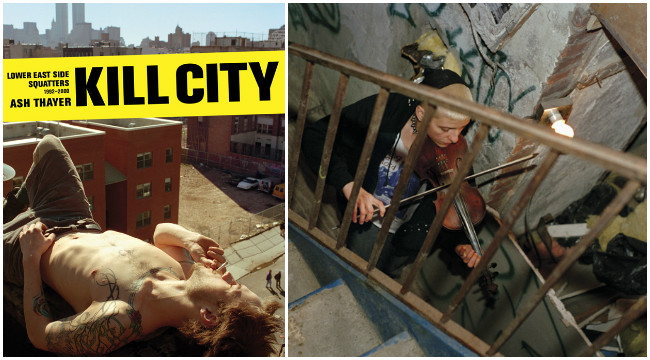 Lady Liberty, The Empire State Building, Brooklyn Bridge. These are just a few examples of what one might visualize when asked about New York City. With five boroughs, eight million inhabitants, glitz, glamour, guns and gangs, it holds true that the city undoubtedly never sleeps.

Manhattans Lower East Side, once a heavily populated immigrant neighborhood is now reveled as the epitome of cool, with its bohemian lifestyle, trendy bar scene, heavy tie to pop culture and never-ending happy hour. Bloody Marys and Oysters anyone?

But wait, let’s pause this modern day image for just a minute and travel back in time and perhaps youd be surprised to find this painted picture stripped back to something incredibly raw and unrefined.

The early 90s saw Thayer, a 19 year old Memphis nativestruggling to pay rent, bills and tuition for art school, which in turn forced her into a life on the streets. Armed only with her camera, the artist began to document life as a resident of See Skwat, a squatter’s haven located on Avenue C, between 9th and 10th Street in the Lower East Side.

Ryan Shenker, a squatter who was present at 1995s Thirteenth Street squat eviction states: “When you lived in a squat, it was your job to protect it. We looked out for the sister squats in the neighborhood, or any squat that asked for help.” The beauty of Kill City can be found in the brief stories told from the perspective of those who lived a life most of us will never know. Perceived human archetypes of the squatter movement are broken down; the veil is lifted, we see a side we never imagined possible for behind the boarded up windows and graffiti thrived a community not so different to yours or mine. Photos accompanying the text depict scenes of passionate protest alongside the cold iron fist of the law.

“Most squatters would work the equivalent of full-time jobs on building their apartments, and preparing them for winter survival. Women and men worked side by side, equally” writes Thayer.

That is not to say the book does not highlight the extreme hardships linked to living on the streets. Kill City explores blistering summers and nail biting blizzards, not to mention the lack of modern day luxuries such as plumbing, gas, water and walls, things most take for granted.

Rick, a squatter and Thayer’s friend states:  “That first night I stayed in my new room it was cold as fuck, and there was no real window, so the wind howled through, whistling eerie jug band melodies out of the half-full piss bottles stacked in the corner.”

With an additional sinister note, he continues to state:”It was a rough first winter. We had eight blizzards that year, and it was also my first year as a bike messenger. One night I came home from work to find a junkie frozen to death on my street in an abandoned car, all curled up on his back like a dead spider.”

Yet hardship can prove its fair share of positive outcomes. In order to grow, one must struggle. Taz, a resident of See Skwat proudly states: “The best part of my life was working on that building, it taught me skills, selflessness, trust, community, and pride. Lifes reward was being there and taking nothing for granted. The accomplishments are endless. I was, and still am, 100% in love with the loyalty that bled out of every single one of us.”

Thayer’s book encompasses strong goals. Firstly, there is her vision to clear the public’s misrepresentation of a squatters life and secondly, to remind us of a time before gentrification, a time where salvaging through trash and dumpster diving was not an option but a necessity. It is a book dedicated to the punks, the gypsies, the outcasts and artists, the worn and the reckless. For they are still human, trying to get through each day, like you and I.