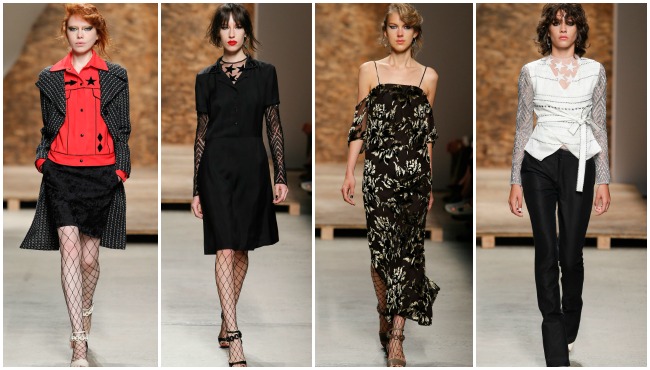 There is depth and intensity to the Creatures of the Wind SS16 show. Slip dresses, white denim, leather and trouser suits all feature in this inspiring collection by Shane Gabier and Christopher Peters. Whats really notable is the looks punk vibe despite the floral prints and pretty skirts. Neutral tones dominate; black, white, grey, and olive greens are only occasionally interrupted by a vibrant red or orange. Fishnets and black nail polish modernise flowy dresses that wouldnt look out of place in a 90s Aerosmith music video.

Occasionallydue to the tailoringthe collection manages to surprise by appearing somewhat office-ready, almost formal. The emphasis on coats and jackets lend a sense of resilience; they are easy on the eye yet appear functional and protective.

Figure flattering tailoring adds a subtle sexinesswaists are nipped in or emphasised in cropped jackets, hips hugged tightly in sensual pencil skirts. With long choppy fringes and thick eyeliner inspired by Siouxsie Sioux, these girls are reminiscent of another icon, Chrissie Hynde. Rather appropriate, given that independence and rebelliousness is suggested by this collection. A must see for those who like femininity showcased in a fresh, unexpected way.