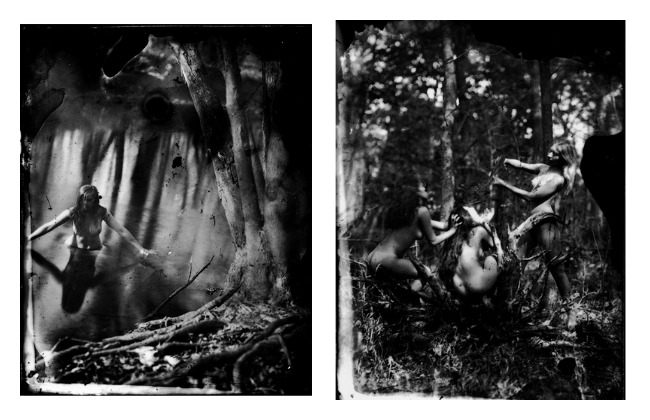 What if witches hadn’t changed that much since medieval times and were still fairly close to the popular imagery conveyed by their early enemies during the classical witchhunts? In this collection, the American artist and photographer, Rik Garrett, signs a personal exploration of the relationship between witchcraft, the female form and nature. We spoke to Garrett about his passion for the occult, his relationship with nature, and his age-old photography techniques.

Lola Who: What influenced you to become a photographer and how did you start taking photos?
Rik: My mother had an interest in photography, and always considered cameras to be important. I got my first camera at the age of six. She ended up having a professional portrait studio, and her darkroom was next to my bedroom. I learned how to use the darkroom at the age of 14. A few years later, she gave me her darkroom equipment and I decided to start taking it more seriously. I had always worked on a variety of art projects but getting that darkroom equipment was the catalyst for my concentrating primarily on photography.

Lola Who: Was there a particular book that inspired your project Earth Magic?
Rik: There were three books that inspired the initial images in the series. The first two were original treaties against witchcraft  the origins and solidification of Western witchcraft mythos: Malleus Maleficarum and Compendium Maleficarum. The third was by Jules Michelet, La Sorciere, later retitled Satanism and Witchcraft. This was a later book on the subject, but it took on a more sceptical view. Still it was wildly romanticised, portraying witches as being outside of conventional society. This stuck with me as I began work on the series.

Lola Who: What’s your relationship with the natural world like?
Rik: I originally lived in Washington state.  Eventually I moved to Chicago, and realized that Id taken for granted the all-pervasive nature that Id grown up with.  After a year in Chicago, I began having dreams about communing with the forest:  eating dirt, talking to rocks and climbing through the woods in a female form similar to my later “Earth Magic” photographs.

Lola Who: What’s your relationship with witchcraft and the occult, and how did you become interested in that subculture?
Rik: Ive always been obsessed with anything that seems forgotten or hidden. When I was seven years old, there was an older neighbour kid named Eddie who had this whole volume of books on the Supernatural. He was 13, played Dungeons and Dragons and basically fit every stereotype of a nerdy neighbour kid. I really looked up to him. He would bring over books and I would just pour over them, wondering how I could make myself turn into a werewolf. Basically, I never lost this quality. I read about how the artists like the Surrealists, such as William S. Burroughs, would fold in ideas regarding esoterism into their work. I played with this over the years, but “Earth Magic” was one of the first series where I was able to make it gel. Studying for the series, reading back over old books and finding new ones, caused me to bury myself deeper in the subject.

Lola Who: Could you share an occult theory or philosophy that you believe in?
Rik: I began with a foundation of folk / traditional witchcraft, with a growing amount of Thelema folded in. I love the writings of Kenneth Grant, Austin Osman Spare and Michael Bertiaux  people who have seen esoteric practice as an artistic process, open to interpretation and growth. Everyone who has ever broken new ground, whether in esotericism, the arts or elsewhere, did just this. Im something of a contrarian, and believe that if you lock yourself into place too firmly you might not be leaving room for growth. Artistically, I believe that your materials matter. You should have a connection to them, and they should be chosen deliberately.

Lola Who: Can you tell us about the equipment you used for Earth Magic and your photographic process?
Rik: I had taken a workshop on the wet plate collodion process, and worked to fine tune my abilities with that. I had to stock up on quite a bit of chemistry and specialized equipment. The process itself is one of the earliest viable forms of photography. In short, you make a negative on a piece of glass. Its all very involved  you prepare and coat a piece of glass, soak it in a silver solution to make it light sensitive, then you have around five minutes to take your photograph and develop it on the spot in a portable darkroom. Exposures are rather long  a few from this series being a minute long. Depending factors such as how you pour the chemistry, the weather, or fate, you get all kinds of aberrations.It takes a bit of the precision out of the technical field of photography, requiring a bit of intuition to seep in and leaving room for serendipity. I love it. Most of the photographs in the series were taken with a 100-year-old camera that I found at an antique store.

Lola Who: What were some of the challenges you faced during this project?
Rik: There were plenty of them! Working with the wet plate process, there are a lot of variables, a lot of things that can go wrong. I had to attempt to make a portable setup that I could bring into the woods. This would be daunting enough, but on top of that I didnt have a car. I would load all of my equipment  large format camera, bottles full of chemistry, etc.  into a cart and take a combination of buses and trains out to the forest. It was ridiculous, honestly. By the time I got moving on it properly, autumn was setting in and I was trying to arrange a series of nude photographs outdoors. Im surprised that I got as much done.

Lola Who: The images you create are between fantasy and reality. What do you want the public to see in those photographs?
Rik: I love that liminal space, and thats exactly the realm I was playing with in these images. Witchcraft in general has towed the line between fact and fiction: wildly imaginative tales of reality  nobody knows what level of truth was behind them, but they were obviously filtered through the minds of people with agendas. These fictions inspired true practice, which inspired more fiction, which eventually inspired modern witchraft movements.

I read about the last witch executions in the West  all over Europe around the middle to late 19th century. Being a photographer, I looked at this and realized that this timeline almost exactly covered the dates and locations of the invention of photography. I imagined this overlap, documenting a society of witches similar to that portrayed by Jules Michelet, in the forests with no need for our idea of civilization. A fierce, strong, independent culture deeply connected to the Earth. I made a deliberate choice in how I wanted the figures in these images to be portrayed, ensuring that they were active and had agency.These women are in control, not passively lounging for the camera. Lola Who: And finally, what do you see in those photographs? A gateway to the unknown?
Rik: I see ”Earth Magic” as setting a stage, introducing others to the liminal world of the Witches Sabbath. Upcoming projects will branch off of this idea in different ways. I intentionally left the Earth Magic series fairly open to interpretation: some viewers appreciate the series as artistic nudes, others have incorporated the book into their esoteric practice. I love all of it, and am flattered that the series has resonated with so many people on such a variety of levels.

If you’re interested in learning more about ”Earth Magic,” you can purchase the book on Rik Garrett’s website.