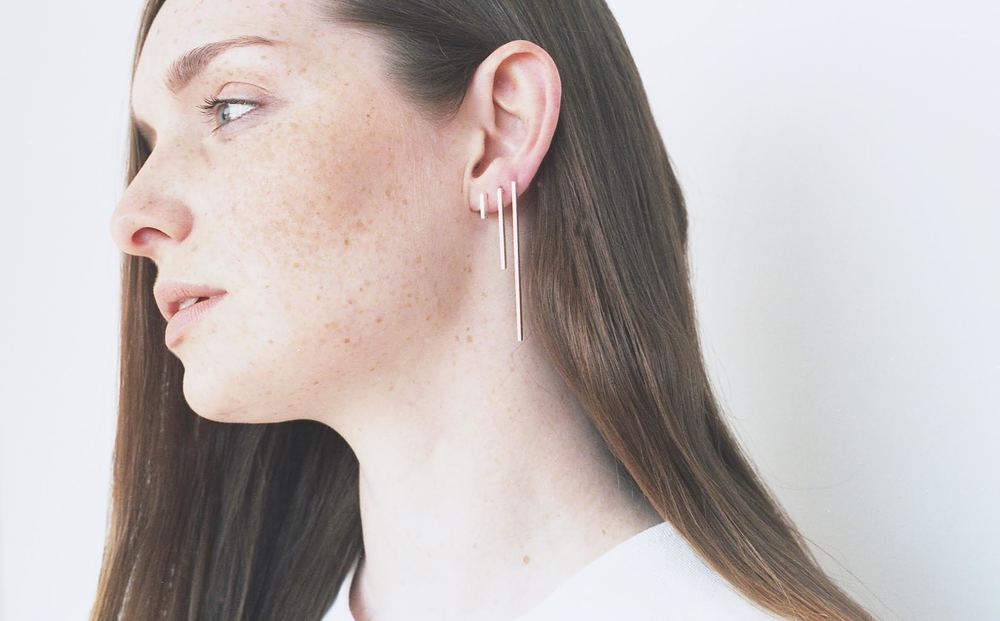 Jewellery can be anything from the final piece that pulls an outfit together, or the very inspiration for what to wear. Arc Jewellery, a Montreal-based brand started by Lina Hu, does all that with modest simplicity. Inspired by architectural and geometric elements, Hu’s designs are clean and refreshing. Hu took a break to talk to us about her love for metalsmithing, her fascination for geometry, and spending the summer in Montreal.

Lola Who: Hey Lina! Tell us a bit about yourself!
Lina: Hi! Im Lina, and Im a jewellery designer based in Montreal. Im originally from Vancouver and am a secret introvert and an ice cream enthusiast!

Lola Who: How did you start off working with jewellery?
Lina: The way I started doing jewellery was kind of haphazard! I had originally come to Montreal to do a Masters degree in science, and a year and a half into the degree, I had a change of heart and left. I wasnt sure what I wanted to do next, and I was curious about metalworking so I signed up for a jewellery course. There, I quickly fell in love with metalsmithingit just made so much sense to work with my hands! I remember looking at my first ring in awe. I was and am still so excited that I can work metal like that!

Lola Who: Your work is very geometric and minimalist in style. Has your style gone through many transformations since you started your line?
Lina: Each of my three collections so far are quite different, but they all share a general preoccupation with clean lines and a fascination with geometry. I think each one takes these foundations and approaches it with a different attitude, if I can call it that. The ”Petites Pensées” collection translates it into something more whimsical, and the ”Pointed Feelings” collection looks at it more architecturally and evokes a more austere feel. The most recent collection ”Linearity” takes the most stripped down approach to geometry. These pieces are the result of reducing three-dimensional forms to essentially two-dimensional ideas, focusing on a minimal expression of lines. Lola Who: How do you keep inspired to create a diverse range of pieces with such a minimalist style?
Lina: I think its actually easier to be creative within constraints! For the most recent collection ”Linearity” the idea of maintaining an almost two-dimensional aesthetic allowed me to play with other elements like modularity. I think it is such an interesting challenge to try to reduce forms to their minimal expression, and then to create variation by changing one or two small elements.

Lola Who: Where does the name Arc Jewellery come from?
Lina: I did’nt want to use my own name for my jewellery line, and I knew I wanted something simple, minimal, yet with a certain boldnessa name representative of my aesthetic. I was attracted to ”arc” because it’s suggestive of the curve of a ringmy first two collections consisted of mostly ringsand it reminded me of the word archetype, which is reflective of my reductionist approach to design. As well, the word arc has all the simplicity, sonically and visually, to match my jewellery. I admit that I did have a long list of other ideas, but a close friend helped steer me towards Arc Jewellery, and I feel that my work and the name have really grown into each other.

Lola Who: Did you always know you wanted to be a jewellery designer?
Lina: Not at all! I’ve always had a strong visual sense and an intuition with form, but it never really occurred to me to apply that to working with metal. I did’nt even start wearing jewellery until I was 24! My mom used to be a jeweller though when I was young, and I remember being very curious about what she did. When I was ready to do something completely different, after quitting my masters degree, that old curiosity resurfaced, and here I am now, obsessed with metalsmithing! I really love the design process of imagining forms and how elements fit together. The problem-solving aspect of translating that into something physical also satisfies the scientific part of my brain. A lot of people have said that my design philosophy is probably born from my years of studying and working in science, and I can’t say that I can counter that!

Lola Who:  When did you launch your Arc Jewellery and how did you grow your brand?
Lina: I officially launched Arc Jewellery with two premiere collections in February 2014, a year after I had taken my first jewellery course. I have been growing the brand since through participating in events and fairs, collaborating with stylists and boutiques, and engaging with other designers. I’m part of a studio collective called Collectif Montreal, and it’s so inspiring to be surrounded daily by thirteen other amazing designers and artists! We support each other in so many ways. I feel very fortunate to work in such an environment!

Lola Who: Where do you draw your inspiration from?
Lina: The man-made! This includes architecture, industrial design, art, fashion, and so much more. I’m constantly looking at buildings, patterns, and lines and shadows of objects that inspire me to visualize, deconstruct and rearrange forms in my mind. Im interested in the abstract and the elemental, and certain details really resonate with me and find their way into my work.

Lola Who: Are there any other designers that have inspired you?
Lina: Uncommon Matters! Amélie Reichs work is so crazy beautiful, and I’m really inspired by the way she explores things thematically and by her incredible technical mastery. For me, Uncommon Matters is on the next level, and its what I want to work towards!

Lola Who: What music do you listen to when you create your designs?
Lina: It depends on my mood. I listen to a little of everything! When I need to concentrate and think, I tend towards more ambient stuff like Tim Hecker or electronic music like Andy Stott. When Im in production mode though, I put on some hip-hopnothing kicks my butt into gear like Kendrick! And Im a bit of a podcast junkie, so I listen to a lot of them while Im in the studio.

Lola Who: Can you tell us about your favourite places to hang out in Montréal?
Lina: I only started drinking coffee two years ago, so I try to find excuses to hang in cafes because its still such a treat! You can find me meeting friends for a chat on the patio at Club Social, or heading to Falco to get work done. The space at Falco is so beautiful, the coffee is yum, and they always have the perfect music playingthe holy trinity of productivity! Im really into cooking, so I love heading up to the Jean Talon market, and during the summer, nothing beats a good park hang at either Jeanne-Mance or Parc Petite ItalieIm all about the picnics and homemade bourbon lemonade! Alexandraplatz is sweet for an open-air drink, and Nouveau Palais for nightcaps and late-night perogies!

Lola Who: What are your plans for the summer?
Lina: Im hanging around Montreal for the most partsummer here is so vibrant and full of adventure, its hard to be away for long! There will definitely be some camping trips scattered here and there, but I will mostly be in the city working on my jewellery and my other businessmaking pies with a friend under the name Hopscotch Pie Co., and tending to my new gardening obsession! Im going to try and fit in a few short excursions, hopefully to the coast. Being from Vancouver, it feels strange to not be near the ocean!