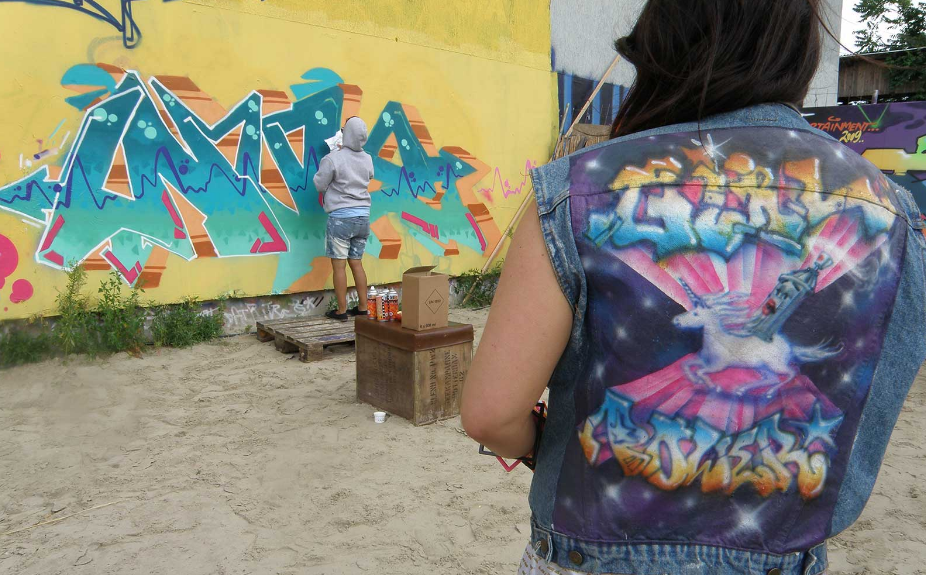 Girl Power is the title of the first documentary focusing on female graffiti artists. Produced and directed by the Czech graffiti writer Sany over the span of seven years, the film features stories of female writers from fifteen cities including New York, Sydney, Toulouse, Moscow, Berlin and Prague. Girl Power premiered earlier this year in Prague and has now gone on tour to screen in a string of cities worldwide. Lola Who had the pleasure to chat with graffiti artist and filmmaker Sany about shooting a documentary about female graffiti artists from fifteen cities over the course of seven years.

Lola Who: You first got into graffiti at the age of fifteen. Can you describe your experience when you first started?
Sany: I don’t think I can recall the very first time. After the Velvet Revolution, everyone was very much into western culture and keen to participate in it. I have always enjoyed drawing. I liked rap, too, so I started doing graffiti. It’s not that much fun when you first start because you’re not very good at it, but you just keep trying. When you’re young and don’t have a lot of much moneyand the paint is expensive, so you only have one or twoit’s not much of a great experience. It’s only once you get better that you really start enjoying it. When and why did you decide to make the documentary Girl Power?
Sany: In 2009, when I started filming, I was the only girl in Prague actively writing. I knew that, out in the world, there were already quite a lot of girls who were also active. I mean a few dozens, as opposed to tens of thousands of male graffiti writers. I was interested in the motivations of other female graffiti writers, why they would do something so dangerous and of course, I wanted to meet them. Lastly, I wanted to promote women in graffiti and do something no one could take away from us anymore. But I had no idea how much that decision would change my life, how long and what a hard a journey it would be. Lola Who: You were shooting in fifteen cities around the globe, from Prague, Madrid and Berlin to Moscow, New York and Cape Town. How do the cities differ?
Sany: There is certainly a significant difference in how graffiti is perceivedthe laws on graffiti vary from country to country, there are different types of trains. The nature is different and the graffiti looks distinct in each country. Graffiti originated in New York, but it is rarely seen in the streets nowadays. There it became commercial and moved onto Moschino and Luis Vuitton handbags. To the western youth, it’s entertainment. People in South America love graffiti, including illegal piecesto them it’s art. In the Near East, or in Russia it might be the only way to express ideas and opinions in a society that does not allow one to speak out in the publicto name the stop ISIS piece in Raqqa, Syria as an example. Lola Who: What is the position of female writers within the graffiti community in those fifteen cities?
Sany: The situation varies around the world. Generally, it’s not great. But in countries like the U.S., girls fought for their right to do graffiti thirty years ago, and those times are gone now. I had a battle to fight after the Velvet RevolutionI’ve been doing graffiti for sixteen years now, and I’ve done a lot for the community. Today, no one can say it’s not for girls anymore. Nowadays, girls are fighting in countries like Belarus, or in the Arabic countries. Lola Who: Out of the fifteen cities featured in the movie, which one was your favourite to shoot in?
Sany: That’s impossible to say because we had 120 hours of material altogether, but the film is only 90 minutes long. And obviously, the shooting was difficult everywhere. I was looking forward to New York because it’s the birthplace of graffiti art. I also got the meet the first female writer Lady Pink. On the other hand, it was disappointing to see that graffiti art has disappeared from the streets.

Lola Who: What was particularly difficult about the shooting? What was the greatest challenge for you as a filmmaker?
Sany: I don’t want to spoil the plot, but it was a great challenge to make a first film about girls who do graffiti, that’s something no one can take away from us. It is a milestone for the girls as well. Lola Who: The film was shot over the period of seven years. Why did it take that long? To what extent has it undergone a change during the creative process  does the final version differ from the original concept?
Sany: The idea has been from the beginning to shoot women in their environment, to show them as regular human beings who have jobs and kids and so on. But we also let them have space to share their story. When you do graffiti you never know if it’s going to go smoothly or if you’re going to get arrested so some changes surely took place… But the general concept, such as who we wanted to have in the film and in what places we wanted to shoot, remained unchanged. Lola Who: That’s exactly what I wanted to know  whether any major change in the concept took place.
Sany: Sadly, there are not that many female writers around. Therefore, there wasn’t really space for major changes. It was either make or break, but we managed to meet up with all of them eventually. Although it often took several years to get to themsince what they do is illegalit was necessary to contact them through the community. First, we had to get them to trust us and then wait whether they will actually turn up. We could only hope for the best. But we made it, and we have the best ones featured. Lola Who: It’s great that you did! Which story do you personally find most inspiring? I imagine it’s hard, if not impossible to compare them. But nonetheless, do you have a personal favourite?
Sany: It is hard to say, since in the film much has be edited out. Many of the women inspire me, but they couldn’t get all the space they deserve, simply because in the film, there isn’t time for that. Maybe Panmela Castro, a girl from Rio de Janeiro who’s been organizing graffiti workshops and using her art to fight against domestic violence. She received a number of awards for her efforts to advocate women’s rights and has been nominated as one of the 150 women that have shaken the world. Lola Who: You say there are not that many female writers around. Do you think that Girl Power will have influence on girls and that there will be more female writers in the future?
Sany: It depends. I think the main message of the film is that everyone should pursue their dream, no matter where they come from: from a ghetto or from a city like Prague. In Prague, graffiti arrived twenty years ago, but elsewhere in the world it has existed for thirty years. But graffiti and the illegal practice especially is not for everyone. Each writer has to find their own path. Girl Power is about a dream come true in a more general sense, and I believe everyone has a dream of their own. Lola Who: The first international screening took place in Paris. How did the people respond? Was the response any different from the Prague premiere?
Sany: The Prague premiere was amazing, 1200 people came and it was just great. I think it might be a difficult film for Czech people to watch, since they don’t travel that much and probably don’t really understand what the film actually covers. They don’t get how someone could sacrifice that much for a movie, either. People of all ages, older people as well, came to the Paris screening and they were excited. In the Czech Republic, some dismissed the film on the grounds of its subject matterillegal graffitiand don’t view it as a cinematic piece. The main character is bad, so to them, the movie is bad, too. But our intention was to show the world that a regular viewer has no access to. In Paris, and in other international screenings, the response was great. Obviously, not everyone likes the filmit’s the kind of film that raises many questions, which is a good thing. Berlin is the Mecca of graffiti art in Europe, so we believe the Berlin screening will be a success. Lola Who: What’s your favourite thing about Berlin? Do you have a Berlin story to share?
Sany: Berlin has been a city of major importance for graffiti and for art in general, where many different styles, various opinions and artists from all over the world come together. I have a lot of friends in Berlin and I’m sure it’ll be great. As there are many artist in Berlin, there will certainly be a lot of criticism, too, but we’re not afraid of thatcriticism is necessary. Lola Who: I’m sure the screening in Urban Spree will be awesome. Girl Power is a film about female writers, how do male writers perceive it?
Sany: It’s still a very controversial topic. As discussed earlier, there are only a few female writersand the film features the best ones, those who have achieved great things. It’s powerful to see them together, and it helps to change the way girls are perceived for the better. We made a film about girls, but I believe that gender doesn’t really matter in the endyou have to follow your dream and do your best to make it come true, no matter whether you’re a girl or a guy.