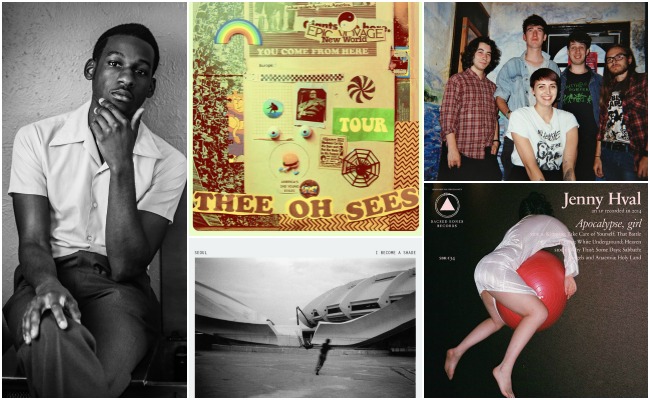 From soul to garage rock and experimental pop,
we picked five albums to listen to this week.

Leon Bridges  Coming Home
You might not think that youd necessarily want to hear someone rehash the exact moods, sounds and sentiments of Sam/Otis/Aretha soul music when you can just listen to them do it. That is until you hear Leon Bridges. He has a voice thats oddly reminiscent of Dan Auerbach’s, from The Black Keys, though Bridges is more fluid, airier, and more seductive. The songs, in all their reverberant glory, are so highly effective in their recreation of vintage soul music that some are liable to end up on a golden-oldies compilation by the end of the year. Its actually pretty weird and awesome at the same time that Bridgeswho wears tight slacks and an old-fashioned bowling shirt on his album coverunironically wrote a song called “Twistin and Groovin” in 2015. Real question: was he cryogenically frozen in the year 1962? However, songs like Lisa Sawyer best show Bridges’ as a gifted singer-songwriter instead of just Sam Cooke 2.0.

Seoul  I Become a Shade
“I Become a Shade” is the first and remarkably polished album by Montreal trio Seoul. While their music is coated with an alluring and dreamy electronica aesthetic, the songs at their core are all deftly crafted popor non-traditional pop as the band recently described themselves. But aside from wondering what is we are to call Seouls music, the music itself is just all-around enjoyable. The winning combination of Seouls potent synths and enchanting vocal melodies with a steadily knocking rhythm will get you wine drunk, while gently coercing you to dance without being fully aware. Do be cautious of that when listening while riding public transportation and such

Jenny Hval  Apocalypse, girl
“Apocalypse, girl”, the latest from the Norwegian singer, is executed with utter freedom: free of genre, free of mainstream convention, free of fear, free of rhyme-schemes. Disclaimer: this album is not literally freeit goes for $9.90 on iTunes, but if you buy it youre free to listen to it as many times as you want. In her light but powerful voice, Hval glides through clever, stream-of-conscious lyrics, reeling off jarring non-sequiturs and hilarious yet insightful questions, like what is soft dick rock?

Joanna Gruesome  Peanut Butter
From the Welsh rockers comes an album thats low in filler and high in protein. Peanut Butter also technically came out in May, though maybe the world wasnt quite ready for it then. But schools out, and its time to dance and mosh to some socially conscious fuzz-pop bangers!