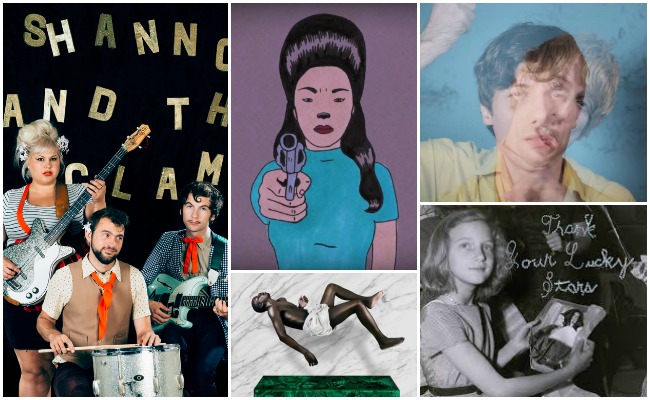 Album releases are plenty, but these five gems
are particularly worthy of your time.

While Deerhunters live shows are continuously reported to be sloppy, self-indulgent affairs, their albums rarely fail to impress or more importantly, entertain. Fading Frontier is airy and experimental yet catchy and very groovy. Not just as in groovy maaan, but also groovy as in locked into a groove  a pleasing rhythmic groove. Snakeskin makes grunge funky  or perhaps its vice-versa. Either way its pretty damn cool.

The Arcs  Yours, Dreamily

Were you recently in your local beard barber shop or BBQ sauce saucery and you heard a song and thought hey cool, its the new Black Keys! Well not quite! Its singer, Dan Auerbachs new side project The Arcs, with whom he can finally channel his sort-of different musical ideas outside of The Black Keys. What originally was a solo project for Auerbach would ultimately include Leon Michels, Richard Swift, Homer Steinweiss, and Nick Movshon who each have writing credits throughwout the 14-track album. Though Yours, Dreamily has some interesting desert rock and spaghetti western elements, and is perhaps a bit sonically spacier than what were used to with The Black Keys, Auerbach mostly sticks to what he knows. And for that we should be thankful.

Shannon and the Clams  Gone By The Dawn

So this is what a punk-doo-wop break-up album sounds like. Though their ingenious genre combos and goofy outfits need not define Shannon and her clams. These songs stand alone from gimmick and image in that timeless sort of way that songs ought to. In a brief documentary about the making of this album, Shannon tells the camera that the songs are (at that point) too literal. Theyre literally what happened so now I have to go sprinkle some mystery dust on them. Well Shannon, whatever you and those clams got up to worked!

La Vie est Belle (translates to Life is Beautiful) is as spectacular as it is indefinable. The listener is joyfully surprised by nearly every development introduced in every song. Seventeen (Stay) opens with a busy, exotic drum pattern which gives way to a heavy Muse-esque baseline and dramatic Dave Gahan-like (of Depeche Mode) vocal delivery. But youre never thrown off. Everything works. Yannick Ilungas singing is pristine, tying together a stunning blend of sound and styles from rap to rock from. My instinct is to call it world music but Miles Raymer calls that classification a condescending, colonialist hangover and hes right. Maybe Global Music or Universe Music is more accurate. Or as Ilunga has himself dubbed his music, Noirwave. That works too.

Beach House is back! And just moments after youve awaken from the hazy dream world induced by their August album Depression Cherry. Its material was recorded during the Depression Cherry sessions and Im pleased to report that Thank Your Lucky Stars is no Jackass 2.5. This is to say that Beach Houses latest is not an album taken from the cutting room floor. It is a delightful collection of definitely-album worthy songs. Though why didnt they wait a bit until the demand for new music was higher? I just dont know. This is incorrigible bad girl/boy of dream pop were talking about here. They do what they want.