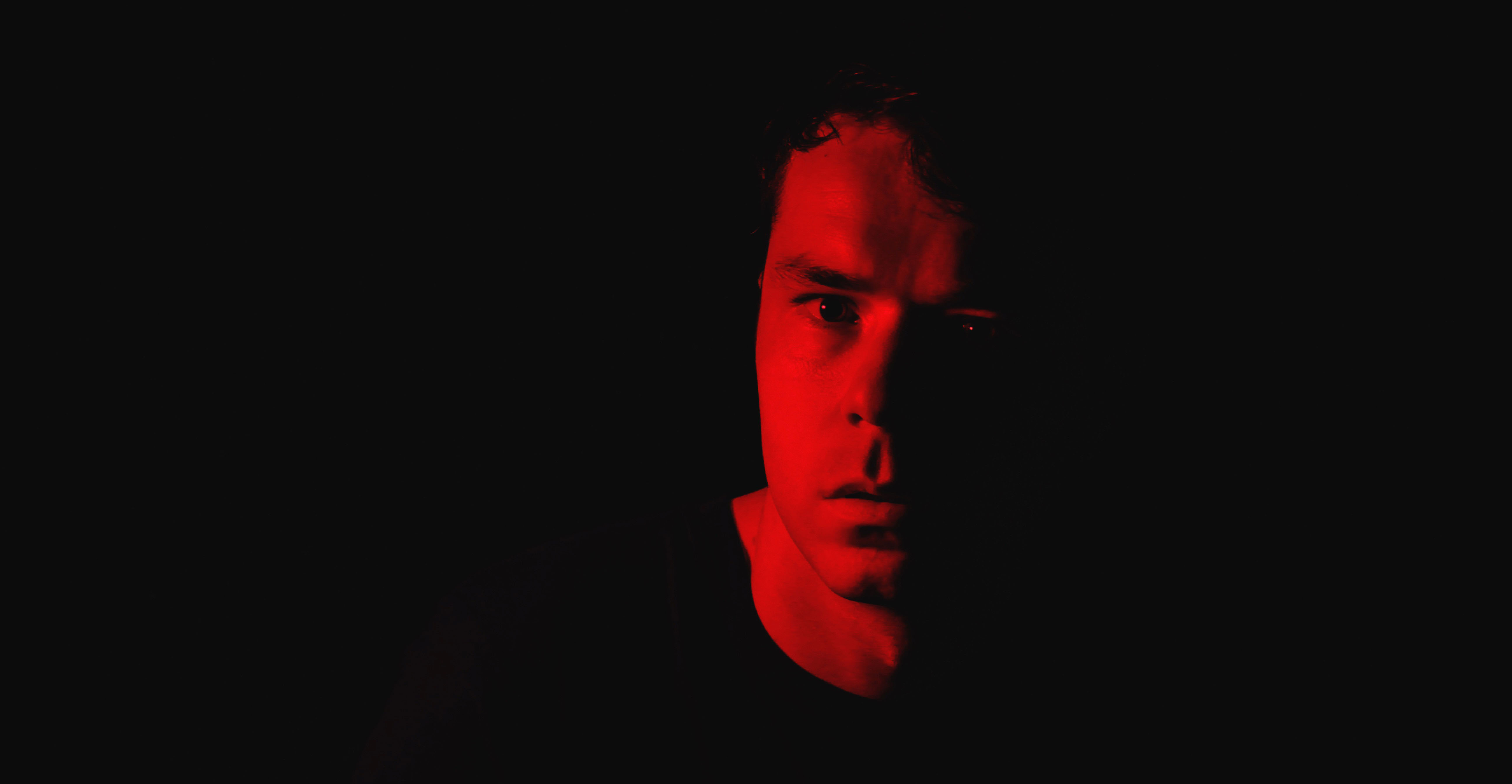 Meet the French cold wave singer and songwriter Adrien Viot. Together with Alexandre Armengol Aremy, they have been forming the dark electronic duo VIOT since 2013.  Their sound is intense, hypnotic, intimate, somber, but above all, danceable, especially when seen live. With his lyrics filled with angst, he crafts a gloomy universe where past and present painfully collide, but also embrace each other softly. Lola Who sat down with Adrien at Drunken, a local brewery in the arty Parisian suburb of Montreuil to talk about his new EP Minotaure, his time spent in Manchester searching for his musical heroes,  and his inner world filled with dreamed up mythological creatures.

Lola Who: Can you tell us a bit about where you’re from and a why you decided to make Montreuil your home?
Adrien: I come from the suburbs of Paris, not too far from Euro Disney. Since I’ve always lived in the East, Montreuil felt like a good compromise. When I moved here 6 years ago, Montreuil was an ideal city with a good mix of artists and people from different cultural backgrounds, as well as many intellectual. But the city is now planning on opening four new metro stations in the next 10 years and the rent is rapidly increasing. A lot of artists have to go further away where the rent is still cheap. I’ve started seeing many newcomers from business schools and wealthier people, so Montreuil is changing very quickly.

Lola Who: How did you start making music under your name Viot and how has it evolved since your first EP Venus Bar?
Adrien: Originally, my project was called AV, my initials (Adrien Viot). Then I started writing more personal songs and added my last name, which felt very freeing. It’s a very open project that allows me to do whatever I want. I try to make concept albums with some kind of continuity between each song. My second album was about love, but also about gentrification, and how love can sometimes deviate for the wrong reasons. My new album Minotaure, which will be released in the fall, talks about predation and species attacking each other.  I’ve created a strange bestiary of mythological creatures. It’s definitely more electro, industrial and techno, with French lyrics, but with the aim of making people dance. With my previous albums, I felt I was depressing people, now I want to make people dance! With my previous albums, I felt I was depressing people, now I want to make people dance!

Lola Who: I saw you play at the OFFF Festival in Paris as a duo. Have you always played music together?
Adrien: On my last album we were four on stage; a bassist, a guitarist, a drummer and me. And now it’s just me and Alexandre Armengol Aremy, who’s also my producer. We have been making music together since the very beginning but he was acting as my producer, now he’s also on stage playing music. Being only two allows us to make concerts more easily in pop-up venues, clubs and bars, which is what we want. So the band feels lighter, and everything feels easier, even when we practice.

Lola Who: How would you describe your sound and how does singing in French influence the melody, compared to English?
Adrien: For me it’s simple; I dream in French, therefore I write my lyrics in French. I hear many French bands singing in English with a big accent and I could never do that. I feel that some French artists sing in English to hide something, or because they’re shy and it’s easier and less personal. But even in my case, I still make the effort to write in French, even if I’m shy.

Lola Who: You released your first EP in 2013, called Venus Bar, then Astana in 2016, and now you’ve just released the EP Minotaure. How has your sound evolved in the past 6 years?
Adrien: My album Venus Bar was very well received in 2013. That was my most successful project! I met tons of musicians… I played with La Femme, I opened up for Etienne Daho and Lescop. That album did a lot for me and allowed me to really show who I was as an artist.  When Astana came out in 2016, it was a bit more complicated because my booker and editor left me, so I had to defend the album by myself.  I still love that album (Astana), but it left a bitter taste in my mouth.  Now, with Minotaure, I don’t want to put too much pressure on myself. What’s important is for me is to do shows, to have fun with the music, and for people to have a good time when they come see us.

Lola Who: I read that you have also lived in Manchester. What made you decide to move to Manchester, how long did you stay there, and what was your life like?
Adrien: Back then, in 2008, I was going through a tough separation and I needed to get away. So I went to Manchester and I stayed there for a bit less than a year working in a wine cellar. I wrote a lot when I was there, I think I wrote most of Venus Bar.  It was a very interesting, painful, and inspiring moment in my life. What’s cool over there, is that you can go and see a concert every night, so I went to see a lot of shows!

Lola Who: Manchester had a very interesting music scene in the 70s and 80s, with Joy Division, The Smiths, The Fall, New Order and many more… How has that city influenced your sound, and to some extent, you as a person?
Adrien: Some of my musical heroes come from Manchester. I’m a fan of Joy Division, Durutti Column, John Cooper Clark, the Stone Roses and Eric Cantona, so I also went there because of them. I actually went back this summer to visit some friends but unfortunately many of them have moved because England is doing very badly these days, and Manchester can be very representative of England since it’s less cosmopolitan than London. So if England is not doing well, then Manchester is not doing well either. When I went there last summer I saw things that were not there back in 2008; a lot of young people living in the streets, hard drugs have become more accessible… Usually when there’s more employment insecurity, artists and people tend to run away somewhere else—and that’s probably what’s happening—or they feel inspired by it and interesting things start happening.  Right now in Manchester the most interesting things happening are in electronic music and hip hop, not so much rock music. Rock has become rich people’s music because you need a space to practice, you need bandmates, and you need musical knowledge.  Overall, I think Manchester has become more mainstream, with lots of shopping and football. But there are still some smaller towns, like Salford, were Joy Division come from, that still feel more authentic and were cool things are still happening.

Lola Who: Can you tell us about some of your favorite Manchester bands and some more recent acts?
Adrien: One of my favorite English band a the moment—I should point that some of the musicians are English and French is HMLTD. Daniel Avery is also a very interesting producers. Rock has become rich people’s music because you need a space to practice, you need bandmates, and you need musical knowledge.

Lola Who: You recently released the single “Minotaure”. In Greek mythology the minotaur is a creature half-man and half bull stuck in a labyrinth trying to find his way out… Why the minotaur?
Adrien: My new songs are often allegories blending mythology and personal stories. With Minotaure, I talk about separation and being lost in memories of the past—which are pretty classic themes in music. I’ve also created a whole bestiary with stories involving a predator and a prey.  I’ve invented a Bird Woman with the body of a cassowary, a very dangerous bird in Australia that dominates everything “evil”. There’s also a song called “La Meute” or the wolf pack, which is about men checking out a woman dancing alone on the dance floor.

Lola Who: How did you become interested in mythological creatures?
Adrien: That topic came completely randomly; when I was recording Minotaure, I rented a hunting lodge in the countryside north of Auvergne. A chalet that was on the site of the Universal Exhibition of Paris in 1937, inside there were plenty of stuffed animals and prints. I also shot the next clips that will come out this year. I actually recorded Minotaure without writing any of the text. So I wrote everything on-site while I was recording, and of course, I was very inspired by all those creatures around me. I wrote a lot of murder songs too. It’s an obsession that I have. Maybe I listened too much to Nick Cave when I was a teenager? Even if I sing in French, I’m very inspired by Lou Reed, Nick Cave, Tom Waits… And somehow I have this obsession with murder songs, but I promised myself to stay away from murder songs for my third album. Some friends who study psychology told me that writing murder songs was often a way towards rebirth… I’ve created a whole bestiary with stories involving a predator and a prey.

Lola Who: Talking about birth and rebirth, how was your label Langage Record born?
Adrien: I started Langage Record in 2011, when my editor dropped me. So I thought “why not do everything by myself now?” Ever since, I’ve been organising concerts in Montreuil, and I also signed a little band called Bruxelles Romance. When I find an artist or a band that I really like, who is struggling or looking for some help, I try helping them with all my heart because I also needed that as an artist myself. Langage Records works as a cooperative. There’s no artistic director. The goal is really for artists to help each other out.

Lola Who: How did you come in contact with Bruxelles Romance and what’s their sound?
Adrien: For a long time I stopped making music, and one day I got a cryptic message via Soundcloud saying “do you still exist?” It was only those words, not even a “hello”. So I was like “ Yeah, I still exist, thanks for thinking about me.” So I heard their music and I thought they were great! It’s very new wave with lots of reverb, like a mix of The Cure and Françoise Hardy.

Lola Who: What’s in store in the next couple of months for you?
Adrien: I’m releasing my EP this spring with a song called “Chambre Rouge” (red room) and a French adaptation of Depeche Mode, “Personal Jesus”, and I would like to release my next album next fall or by the end of this year (2019).