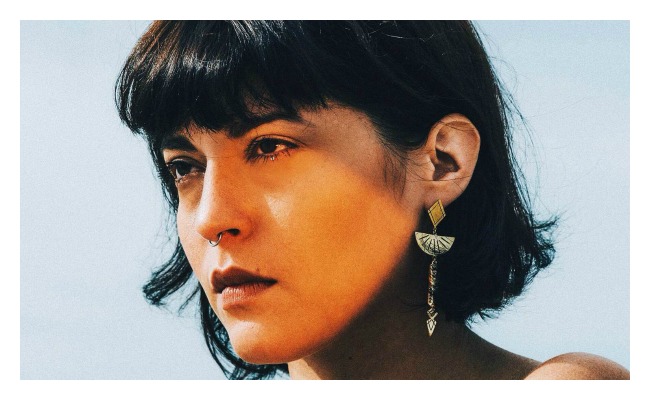 Meet Melissa Hernandez, founder and creative director of the Brooklyn-based brand Coyote Negro. Hernandez tells us how she got her start in New York and shares her love for music, vintage clothing and how she developed her own personal style.

Lola Who: I know that youre a jewellery designer and vintage curator. Can you tell us a little bit about yourself and everything that you do…

Melissa: I was born and raised in Puerto Rico. In 2010, I went to Miami and did post-graduate studies in advertising. Half way through, I did an internship in New York which landed me a job as an art director, so I quit school and dove into the agency world. I hated that I didnt have much creative freedom, so I started Coyote Negro as a place to express myself.

Ive always been into vintage fashion,and there are so many gems here in NY that I thought Id love to bring them back to life. Although right now Im focusing mainly on jewellery, I also have a project with my partner Quique Cabanillas called Nosotrus. Mostly, Im an art director currently translating ideas into wearable adornments. I also love to cook! Ive always been interested in the idea of sharing my recipes but I can never figure out the measurements.

Lola Who: Tell me about your creative inspiration. What inspires you as a designer?

Melissa: Everything! Theres so much inspiration everywhere. And now with technology we have access to basically everything, which can also be a bit overwhelming and a double-edged sword. My good friend Raquel once said to me: what you get inspired from is going to reflect on your work and that has stuck with me all the time. Tumblr, and Pinterest are great sources but they are too accessible so everything eventually will look the same. For the new stuff Ive been working on, I went to the library which is sooo much more fun than doing online research. Ive found stuff thats not on the web and that I had no idea it even existed

Lola Who: How would you define your style?

Melissa: That is a question Ive asked myself for years and still havent found the answer. I like so many things and I feel so different every day that I could not label myself into something right away. Sometimes I wear my Chelsea cowboy boots with my leather jacket. Other days I wear just white plain sneakers with oversized pants and a simple shirt. I like to have fun dressing up. I want to wear it all.

Lola Who: I read that you are originally from Puerto Rico, how has your Spanish heritage influenced your creations?

Melissa: Women in Puerto Rico like to be bold and make an impression. They will wear everything at the same time; the opposite of simple. This has influenced my work in a way that I like to create bold pieces that wont go by unnoticed. Mostly statement pieces. The same thing with clothing It was hard for me to pick a simple white tee when I could choose a rainbow one. Living in New York, Ive found the beauty in simplicity so now I try to create simple bold pieces. Nothing too much or too little.

Lola Who: What music do you listen to when you are working on one of your many projects? I love your Soundcloud playlist by the way!

Melissa: Thank you! This is one thing that gets me very, very excited and actually, I feel flattered that you mentioned my Soundcloud, since sometimes I feel no one listens to it! Haha! But I really love music. I feel music defines who you are. I can totally know a person by looking at their music collection, and I love that. I have different kinds of music I listen to when I work. When Im working on something very mechanical I mostly listen to podcasts – which is a new thing for me – since it keeps my mind entertained and I learn stuff. I always have new music to listen to. Recently, my boyfriend introduced me to Francis Bebey and I love it! We started doing a bit of research on African electronic music and there are really cool artists; Helado Negro, Holly Golightly, Gustavo Cerati You can never go wrong with Cerati. If were shooting, I like more up-beat stuff like Matias Aguayo, Jeremy Jay or The Slits are always a good option.

Lola Who: Do you remember the first time you bought something from a vintage store?

Melissa: Yes! Its my big sisters fault that Im into all this. She was into the alternative scene; she was a Club Kid back in the day. The only place she could find cool stuff was in Contempo Casuals and The Salvation Army. It was 1996 and I was in the sixth grade. She took me with her and her cool friends to the Salvation Army from Puerta de Tierra in Old San Juan. She picked me up a pair of white high waisted denim bell bottoms. I felt I was killing it, since all the other kids were wearing Gap and Sears stuff. My sister was the one who showed me it was ok, and actually cooler, to look different from everyone else.

Lola Who: Can you tell me some of your favorite shops for buying vintages clothes in Brooklyn?

Melissa: I think Worship Vintage here in Bushwick has a great curated selection of vintage clothes and accessories at a good price. All the  L Train vintage  stores are great for time period pieces. My favorite ones are Urban Jungle and No Relation Vintage, but the last one can get a bit pricey since its in the East Village.

Lola Who: Can you tell us a bit more about your project Nosotrus?

Melissa: Its so interesting that you connected the dots with me being Coyote Negro and Nosotrus at the same time. Nosotrus is my partnership Quique Cabanillas as a photographer, and me as the art director and stylist. We also do graphic design, since its something we both enjoy. Its our place for creative freedom and we can do whatever we want as a team.

Lola Who: What can we expect to see from you in the future?

Melissa: I want to experiment with different mediums as a creative and as an art director. Two years ago I didnt know I was going to be making jewellery and have people actually buying it. I didnt know we would get hired to do the stuff we do because we like to do it. I never see myself doing just one thing for the rest of my life. It terrifies me. I want to keep experimenting. One thing I know is that I want to take a break from New York. I know it will always be here for us, but I need a break from this draining city that I love and hate at the same time.

Check all the collections: Coyote Negro