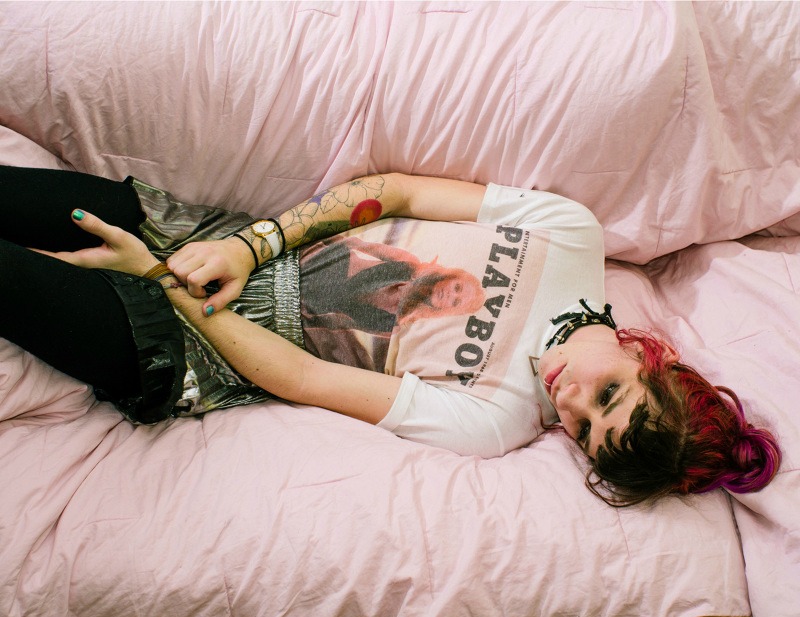 Hobbes Ginsberg is a 21-year-old photographer from Los Angeles.  The first photo album on her website titled selfies is just that, photos of herself. However, her self-portraits are far from a series of cellphone snaps in public bathrooms. Rather she creates beautiful colorscapes using makeup, floral clothing, denim backdrops and several colors of hair dye.

Her attention to fashion, composition, color and design is evident. The changing length of her undyed roots reflects the diary-like nature of these portraits.  There is a genuine sense of poetry and significant attention to narrative.

One would assume she is interested in trying to say something about gender roles and identity. In fact, many of her photos juxtapose elements which are typically associated with being either male or female. But Hobbes “selfies” arent entirely focused on this topic.  In one photo, she is standing with a nametag and a plastic bag from the GAP on her head. Its a portrait of a young artist working in a hellish department store. I can relate. In another photo, she shows her dirty hands and wrists wrapped in colorful thread bracelets and a yellow rubber watch.

As I was going through her porfolio I realized that Hobbes isnt trying to say something about gender identity. Her photos are simply saying something about herself. Because her fashion did not conform to a male and female binary system, I assumed that drawing attention to her gender ambiguity was the point of her photography. But after seeing more photos of her life and travels, I realized that I had this assumption based on my ability to distinguish the biologically assigned sex of person.

Obviously, gender is a topic present in her photography, but there is much more to her work.  And she says her gender is neither male, female or a transition from one to the other.  She sums it up very well in her Tumblr blog:

i feel like as a queer girl i can decide for myself what is feminine and girly and beautiful and ~me~ and i sometimes find solace in that fact that maybe it is all made up and most people just haven’t learned that yet.