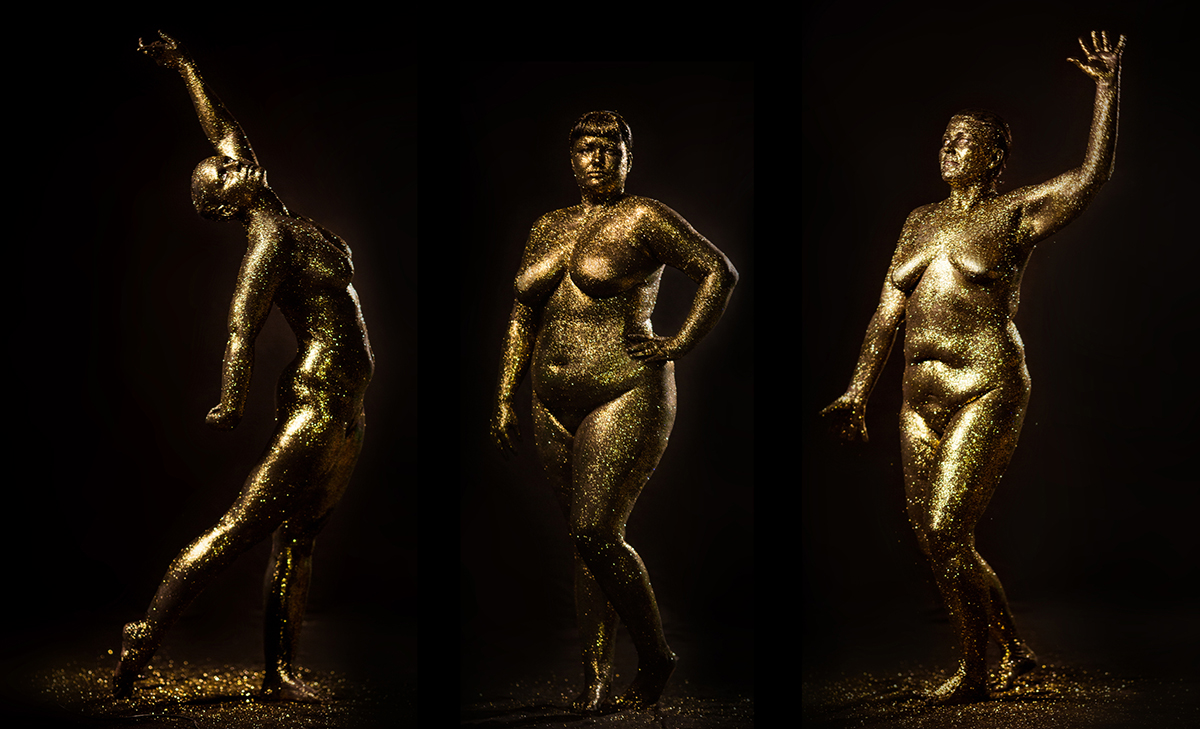 With The Weird Girls Project, the conceptual visual artist Kitty Von-Sometime wants to encourage women to love themselves as they are; curvy, round, thin, small or skinny. For the past nine years, the British-born Icelandic-resident has been creating music videos “to highlight the variety of shapes and sizes that make us who we are.” For International Women’s Day, we talked to Kitty about her latest glittery video #EmbraceYourself, what inspired her to make activist-art, and why women should love their bodies, whatever their shape. Lola Who: Hi Kitty, can you tell us about yourself?
Kitty: I come from Devon in the South of England, and I moved to Iceland 10 years ago. I now live in Reykjavik, and I’ve stayed in Reykjavik the whole time that I’ve been here. Currently, I’m about to move house with my daughter, but I’ve also been developing a concept for new video work involving installation.

Lola Who: What inspired you to start this project nine years ago?
Kitty: To begin with, it was a one-off event. It was a glorified themed party. It started because I had friends with eating disorders and also friends who have had sexual abuse scenarios and who were very body conscious. I wanted to put them in front of a camera to help them, and free themselves a bit to feel good. Initially, I invited a group of girls to come to my house and bring loads of different costumes, and we began from there. I organized for there to be a video camera and I had a photographer come in as well.

Lola Who: Can you tell us a bit more about the latest video “#EmbraceYourself”?
Kitty: With “#EmbraceYourself” I really wanted to focus on the female form. I wanted to exhibit a selection of shapes and sizes in a very glamorous way. I spent quite a lot of time trying to find the right material to put on the skin that could highlight every area of the body, whilst also making the women feel glamorous. So that the women were not feeling like they were under a spotlight with the sense of being stared at, and because of the glamour of the glitter, they felt more comfortable with it. It was all filmed in front of mirrors to show “this is how you should see yourself; embrace yourself.” I was also covered in glitter, but only to my hips. I didn’t get covered any lower down because we were going to run out of it. We couldn’t afford to have more glitter on me knowing that I was only in a few shots, and that we had to save the glitter for the women to be retouched.

Lola Who: How did you become interested in issues of women empowerment and body appreciation?
Kitty: My interest in how women look at themselves comes from the fact that I was very awkward as a teenager, and I had lots of my own problems, but I’ve never really developed this extreme paranoia with how I looked regards to my shape. But it’s been an influence that almost every single woman that I’ve known has had problems with how they look. I went to an all-girls school, and a lot of the girls had eating disorders. A lot of women have these problems, and it’s something that I find very frustrating. I’m very grateful that I didn’t have that particular way of thinking. I often have moments when I think I don’t look as good as I did the day beforelike any normal personbut negative body image is something that I’ve generally escaped.

Lola Who: As a multidisciplinary artist, how has your art evolved in the past nine years in regards to conception, video technology, and music?
Kitty:  It’s a very different scale now… The first episode “Neon Fame” is incredibly naive. I didn’t know what I was doing and it’s impossible to hide from it. My entire education about how to produce these pieces has been live through the pieces. So if you watch the videos from the beginning, you can see my skill set develop throughout all of them. Especially for the first one; we had no budget, no equipment, and no crew. It’s incredibly amateur, but it was still very fun! On the last episode “#EmbraceYourself,” there were 66 people on set, and we still didn’t have the budgetthat stayed the same. I had a wonderful crew working for me. But the goal of the project has stayed the same; to encourage confidence in women and make people feel good, and that is a very strong requirement for each piece. Personally, my love of filmmaking has grown very much. Sometimes, I find it a bit of a battle to balance the fact that I want to achieve something that looks kind of perfect for my visual art standpoint, but that I also have to focus strongly on making the women feel comfortable, and that is more of a prime goal.

Lola Who: The Weird Girls Project has become a collection of 25 episodes. Can you share some of your most memorable moments about filming these videos?
Kitty: The most recent video “#EmbraceYourself” is probably the most memorable one. There were many hilarious moments and many difficult ones, but the most priceless one was when everybody met on the morning of the shoot. I told them what was going to happen, and I was able to pull out of my back pocket what I told them was their costume: a glue-on paper C-string! It was one of the best surprises I’ve ever had because all of their faces were in complete disbelief. At that point, they didn’t know that their bodies were going to be painted so thoroughly.

Lola Who: How do you develop each video concept?
Kitty: I develop the video concept completely on my own, and then I bring in a cinematographer to discuss shot lists. I like to incorporate their ideas because I still don’t have a full education in cinematography. But the women never get involved in the concept because they’re not supposed to know anything. They just volunteer their names. I get all their measurements. They get a date. They might get emails with clues with regards to the fact that they have to be prepared to be wet, or outside… But mostly, the women don’t know anything, and that’s the whole purpose; to have them in a state of anxious excitement in order to take that energy and harness it to push them into the situation they’re in. Which is something that might make them feel uncomfortable if they’re very conscious about their body.

Lola Who: You’ve been working on this project for almost a decade now. Have you noticed a difference in the way that women perceive their body ?
Kitty: I think more people are trying to portray the same message that I am. There’s more of an awareness that body image is an issue, and that media’s representation of women is an issue. But equally, how we see ourselves in digital images has gotten bigger and bigger because of the internet. People fake everything. You can even get filters to fake your Snapchat and make you look better in them. It’s so ridiculous. The other thing that I’ve noticed is that the same thing is happening to men, and it makes me really angry. Now, the front cover of every men’s magazine is about getting bigger biceps, about being more toned in the stomach, about having the perfect hair and the best clothes, and all the rest of it. We haven’t learned a fucking thing.

Lola Who: How would you describe someone who’s a “weird girl” and how did you come up with that name for your project?
Kitty: To be perfectly honest, I would have never called it “The Weird Girls Project” if I had known it would become such a longstanding work! It was basically because the second piece I made was about being a freak, and it was the combination of that, coming out with the fact that I didn’t really know how to call it, so I just called it “project.” But a “weird girl” is supposed to be someone who’s not afraid to step out of the norm, or step out of her own boundaries, or to have what for her is a weird day. Since the women taking part in my project are not specifically actresses or modelsone or two are actresses or models who wanted to take part anywaybut the majority of the women are not used to being in front of the camera, so it’s more about being open to the experience of doing something unusual.

Lola Who: The images shown by mass media and by the fashion industry continue to mold one single “ideal” body shape. What would you tell the fashion industry about methods of advertising?
Kitty: In clothing and fashion, there should be a variety of figures. It changed to the point where there are plus size models nowbut the use of the term “plus size” makes me irritated. If there’s a marketing campaign, use a variety of humans in it; that includes gender, race, height, weight, everything. Doing anything else is ridiculous. I think we need to stop making it about one body type, and that body type is incredibly difficult to achieve, even for the models. Everyone I know who is modeling does not get to eat normally, even if they are naturally thin. And that has a lot to do with the fact that the size of the items for the catwalk models are very small, and that needs to change. Lola Who: Finally, what advice would you give to develop a healthy body image?
Kitty: I genuinely believe that you should ask for help if you think anything is affecting you on a daily basis. If how you think you look is a problem and you think about that everyday, you should go and get some help. And that’s very basic, it doesn’t matter if you think you’re too thin or too big. Speak to your family. Speak to a therapist. Speak to a nutritionist. You should not have to worry about how you look on a daily basis; it’s just not good for your soul.