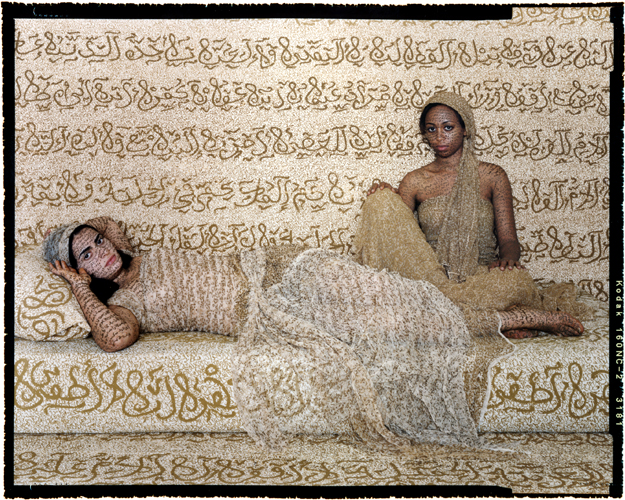 On a journey of introspection and self-discovery, a photographer by the name of Lalla Essaydi, based out of New York City, struggles to understand Orientalism, the complexity of the Arab female identity, as well as the confines of Islamic tradition and the spaces in which she grew up.

Born and raised in Morocco, she moved to New York after living for a few years in Saudi Arabia. Confronted by many realitiesand spacesEssaydi embarked on a journey of artistic self-exploration.

Essaydi captures the place of women in the Arab culture in her captivating intellectual photographs. She not only tries to capture the multi-faceted identity of Muslim woman, but she revisits the Orientalist imagery that continues to influence the idea that Westerners have of Arab women.

“My work reaches beyond Islamic culture to invoke the Western fascination, as expressed in painting, with the odalisque, the veil, and, of course, the harem. Here is another way in which my work cannot be read simply as a critique of Arab culture… I want the viewer to become aware of Orientalism as a projection of the sexual fantasies of Western male artistsin other words as a voyeuristic tradition.”

Calligraphy, being an important component of her work, can be seen as a way to give these women a voice within the confinement of their space.

Women, have been confined to private spaces, the architecture of the home. Physical thresholds define cultural ones, hidden hierarchies dictate patterns of habitation… In my photographs, I am constraining the women within space and also confining them to their proper place, a place bounded by walls and controlled by men.”

Beautiful, subversive, and captivating are words that come to mind when looking at her stunning photographs. Gradually, as you look at her images, you start seeing more than beautiful portraits of women, each meticulously composed, but you become aware of the long-lasting stereotypes of Orientalist images and the deep impact it had on culture and sexual fantasies.