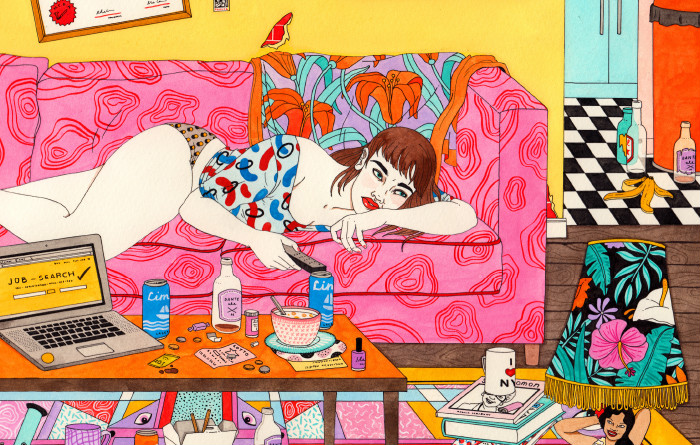 Full of energy and details, her illustrations give the impression of a retro comic stripor vintage fashion illustrations from the Roaring Twentiesstylized while still revealing intimate details.

Often the women are sitting in the privacy of their own bedrooms, alone or with female companions, surrounded by the paraphernalia of their daily livesa Freida Kahlo poster, a personal library of literary classics featuring female protagonists, a dreamcatcher, a hookah, Veganese, a box of pizza. One woman holds a copy of Edward Lees “Portrait of the Psychopath as a Young Woman” in a bookstore, while observing (and being observed) by a man through the shelves.

Using a mixture of watercolour, Indian ink, and isograph pen, her work has been featured in in NYLON Magazine, Refinery29, Riposte Magazine, and Magnitone London, among others. She also worked as the Illustration Editor for Oh Comely Magazine from 2010-2013. Laura had her first solo show, Aspirational, at KK Outlet in London back in the summer of 2016.