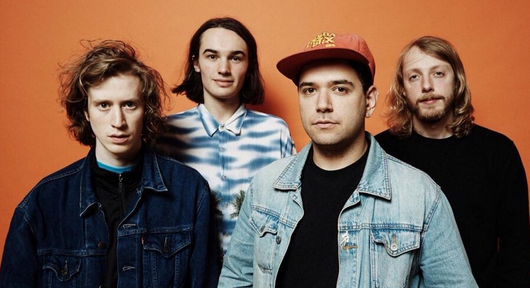 Spring King leapt into the ears and consciousness of many fans when Zane Lowe chose their song City as the first song he ever played on Beats 1 on Apple Radio. Since that time, many have come to love the four-piece Manchester-based band, often described as post-punk or art-pop-punk, composed of Tarek Musa, Peter Darlington, James Green, and Andrew Morton. Their brand new singled, Rectifier, is available now on Soundcloud and is slated to be released as a limited 7″ on March 25th, the band’s first single for Island Records.

In this interview, frontman Tarek Musa discusses how he came to be a drumming lead singer. He also gives insight into his songwriting influences, his love of dub music, as well as hinting what we can expect in the future from Spring King.

Lola Who: You recently released “Rectifier,” the first single from your next album. How have you found the response so far?
Tarek: Weve had a lot of great responses from the new track, our fans have enjoyed the tune! I couldnt have asked for a better response.

Lola Who: Is “Rectifier” a good indication of what people will hear in your upcoming album?
Tarek: Expect some slower songs too but not many.
Lola Who: The group is often listed as originating in Manchester. Do you still live and work out of Manchester?
Tarek: Yeah, were all living in or around Manchester and its surrounding towns.

Lola Who: Youre from Manchester; football fans? Who do you support? City? United? Somebody else (Salford City)?
Tarek: Petes a Macclesfield Town FC supporter and James is Burnley all the way!

Lola Who: Many people will have first heard of Spring King when your song City became the first song ever played on Beats 1 on Apple Radio. Now that the dust has settled a little bit on this historical moment, what long-lasting effect can you say it had for the band? Have you been able to gain some perspective on this?
Tarek: The Beats 1 play really had an effect on all of us. Zane Lowe had kind of catapulted us into the spotlight in a way weve never had before. The best outcome from it was that a lot of new people now enjoy our music. Thats what it’s all about at the end of the day.


Lola Who: It is comparatively rare to find a drummer who is a prolific songwriter. Rarer still for that drummer to also be a singer. What has led you down this road where you find yourself in these three key roles?
Tarek: Ive been playing drums since I was around 14 years old or so. When the first line up of this band existed, I was playing bass. Eventually, we needed a new drummer but couldnt find anyone so Pete told me I should try to do it. He said that I might as well, seeing as I already played all the drums on the recordings. So I did, and over a few weeks I slowly got used to singing and playing at the same time, but it was quite hard at first, just in terms of fitness and stamina alone. The songwriting has always been something I wanted to try doing. Ive been a huge fan of Brian Wilson and thats really what sparked the biggest urge to write music a couple of summers ago.

Lola Who: Do you see Spring King as part of a larger Post-Punk/Indie Rock/Art-Pop-Punk movement in the UK? Or do you just focus on your own music and play what you like, regardless of what other bands around you are doing?
Tarek: Ive always felt a little on the outside. Whether or not thats the case, it feels like weve always done our own thing. And then, when it comes to show time, we join up with other friends’ bands to play nights. Weve always just been about playing for enjoyment.

Lola Who: On your Soundcloud page, you have a track that is a dub remix of Theyre Coming After You that is very interesting and unlike anything else youve released. Did you do this remix yourself? Whats the story behind this track?
Tarek: I love dub music. People like Augustus Pablo, King Tubby, Mad Professor and Scientist among many others have always been the soundtrack to my summers growing up. The art of making a dub has always been magic to me, something Id like to do more of. Theyre Coming After You” has always been a slightly paranoid song lyrically and I felt that the effects (echos, reverbs, weird sounds) of dub music and the various realities it can take you through reflected the type of remix I wanted to do.

Lola Who: Can we look forward to any 2016 Spring King releases? Perhaps a long-awaited full-length LP?
Were working towards an album, itll happen!

Lola Who: Any plans to play more dates in North America and Europe?
Were working this out too, but the short answer is most definitely yes to both!

Lola Who: When can we expect your next album to be released?
Tarek: Were hoping to get an album out by the middle of this year. Just before summer hopefully!