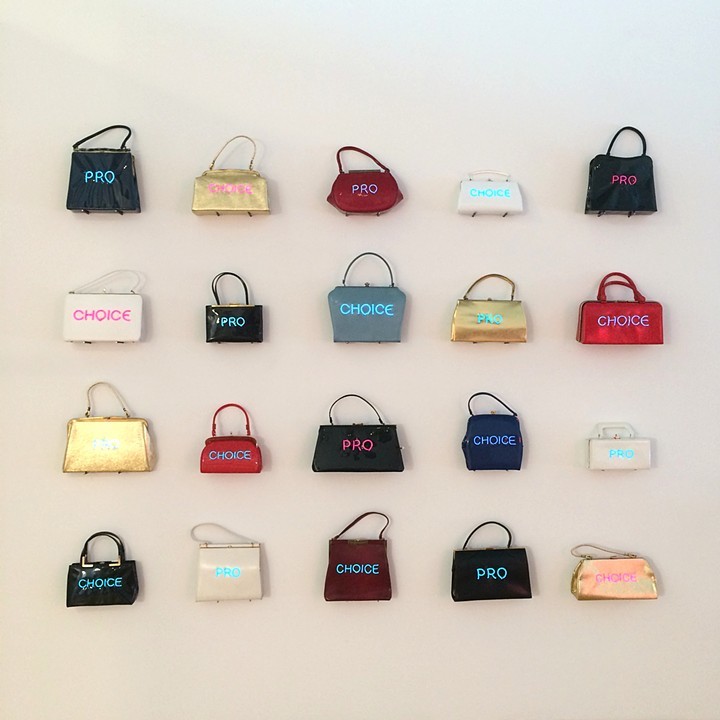 In her clever and politically fuelled series titled Choice, conceptual artist Michele Pred reconnects the past with the present by making a modern statement on vintage purses from the 50s and the 60s. The 48 purses of the “Pred-à-Porter” collection part of the “Promote the General Welfare” seriesare emblazoned with electroluminescent wire and thousands of expired birth control pills.  We were lucky enough to chat with Pred about how she uses her art to spark conversation about women’s reproductive rights. Lola Who: Hi Michele! Please tell us a little bit about yourself.
Michele: Im an artist, educator and a mom, so I keep myself pretty busy. I teach part-time at California College of the Arts in Oakland, California (CA), where I also live. I grew up between Berkeley, CA, and Sweden. My mother is Swedish, so I speak the language fluently and have dual nationality. My father was a professor in Cultural Geography so we spent every four years living in Sweden when he was on sabbatical doing research and writing. Lola Who: When you were first getting into art, was it your intention to use your work to make strong political and cultural statements?
Michele: Yes. Having a political point of view has been a huge part of my art from the outset. I grew up in a very political family. My father taughtwith a strong political bentat UC Berkeley for over 40 years. I was going to anti-war demonstrations and having political discussions at the dinner table from a very early age. Lola Who: Your new show Choice at the Nancy Hoffman Gallery in New York featured a series of purses from the 50s and 60s with pro-choice messages. What inspired this collection?
Michele: I was influenced in part by my mothers experience in the 50s and 60s as a very independent woman who left home to travel the world. I began making neon pieces on suitcases that echoed the “Pan-Am” aesthetic from that time. However, these were not portable and needed to be plugged into the wall. I liked the idea of having a portable billboard that you could wear and make a statement and hopefully ignite a conversation. So I moved to purses as my canvas as a way to marry the politically-charged messages of the Pro-Choice movement with representations of women’s modern economic power and the possibilities for change that come with it. I have several different texts that are included on the purses in electroluminescent wire (they light up and blink).  These texts include Pro Choice, Equality, Feminist, Access and My Body My Business. Lola Who: Who are you trying to reach with you art? Politician? Men? Women? Girls?
Michele: Ultimately, I am trying to reach all of the above and I hope to evoke fresh conversations about womens standing in our society. However, I must admit to a particular joy when I’m able to connect young women with the long and heroic history of the struggle for womens equality. Lola Who: How would you compare the attitudes towards the pro-choice movement in the 50s and now?
Michele: The 50s did’nt have much of a “movement” at all. It was’nt until the 1960s, inspired by the civil rights and antiwar movements, that women began to fight more actively and collectively for their rights. The fast-growing women’s movement took the taboo subject of abortion to the public. Lola Who: Why vintage purses and not ‘modern’ purses? Is the expression “The more things change, the more they stay the same” appropriate in this context?
Michele: Yes it is! For me, the use of purses from the mid-twentieth century calls back to that critical era and reminds us how much has changed and, more importantly, how much has not. Lola Who: What’s the state of womens reproductive rights in the U.S., and worldwide?
Michele: Dismal! Unfortunately, the situation is worsening. While I strongly believe progressive ideas are on the ascendance in the long term, the immediate situation is rife with assaults on womens rights. From the shuttering of healthcare providers in Texas and other states to the PR fabrications aimed at Planned Parenthood, reactionary forces continue to press against a womans right to choose her own destiny. I also spend a good deal of time in Sweden where there is socialized medicine and where a womans political and human rights have a much stronger currency. I was shocked to learn that, even in Sweden, there are politicians that are opposed to abortion! Lola Who: As a believer in pro-choice, why do you think the United States Supreme Court still uses religious grounds to justify the decision to deny access to female health services?
Michele: The conflicts we see played out in the Supreme Court are simply reflections of the still very conflicted personality of the American people. On the one hand, we are the inheritors of the strong puritanical ethic that formed the basis of our original (white, European) society. On the other hand, those same Puritans were fleeing religious intolerance and eventually followed leaders who used the ideas of the Enlightenment to craft a government focused on freedom. Many people, Anton Scalia and Clarence Thomas among them, see the two sides as intimately entwined and interdependent. They see rigid fundamental religious doctrines anchoring the Constitution and providing stability.Many progressives (like me), see things differently. We see the Constitution as a tool to protect us from the very religious intolerance that plagued the Puritans in 17th century England. It did this by removing religion as a basis for government and providing a flexible framework for protecting freedom.