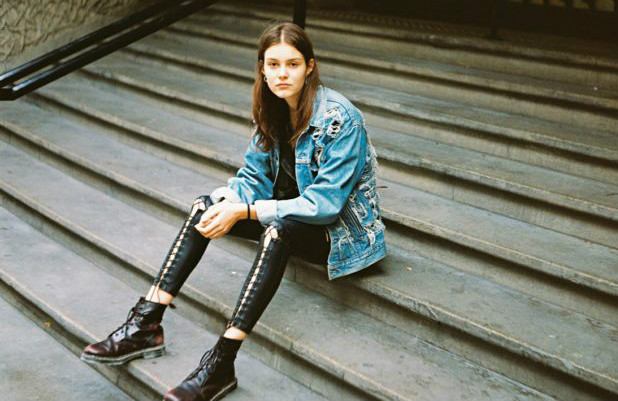 Thomas Sing and Chiara Padovan are a Berlin-based photography duo. In an attempt to reveal a more honest side of the modeling industry, they recently launched a new venture called Models in the Raw. The project aims to show models in more authentic and vulnerable contexts, allowing them to choose their own clothing and sets for shoots. Through this process the models are able to take control of how they are perceived, an idea that is completely foreign to the modeling industry. Their photographs are displayed alongside interviews that come around naturally from conversations that unfold during the shoots. Lola Who: Hi Thomas & Chiara, thanks so much for speaking to us today. Would you tell us a little bit about Models in the Raw?
Thomas: Models in the Raw is first of all a personal journey, born out of a desire for realness, simplicity and authenticity. It chases a glimpse beneath the surface of glossy fashion imagery by portraying those who bring a whole industry to life by lending it their faces: the models. Every week we introduce a model on our website with a set of about 20 pictures and a tailored interview based on the conversation we had on the day we met. We try to give them back the choice of their presentation: they can show up as they like, wear what they like and pick a place of their choice. It’s actually a thrilling journey, when you give the unexpected a chance! Lola Who: What was it that first attracted you to the idea of showing us the people behind the glossy pictures we see in magazines?
Thomas: At this point we must confess that we have been involved in the production of editorials and advertising images for quite some time. On production days, the whole team works to create a perfect picture to best sell a product. Everyone is up to give their best; that’s what they get paid for. The set is crowded, time runs fast, the budget is tight, you’ll mostly have a busy and good day, a lot of small talk but nothing very insightful. Then you’ll go home, have some sleep and start setting up for your next job. You can be perfectly fine with that and go on endlesslyfashion is fast-paced and you can keep running on its mill. We just weren’t totally on board with that routine. Somehow the necessity of a different approach was there before the actual idea. And then one day, after yet another production, I got to thinking that actually I liked the models much better as they showed up in the morning, in their own clothes and without make-up. It resonated with my own quest for something more authentic, more human. I have always been more interested in the flaws, the cracks on a surface. They are the premise toward something deeper.

Chiara: We talked the idea over and over and realized we wanted more than just a bunch of pictures. We actually wanted a conversationwith the models, but with the public as well. That’s where the interviews came in. It was something new for us, but adding some words to the pictures felt like the right thing to do. We have never been the ones to be scared off by new challenges, and the biggest are always the ones we set ourselves. Lola Who: Your process involves shooting on film in order to capture the raw nature of subjects. Is there any post-production involved or do you leave the photographs as raw as possible? What type of camera do you use?
Thomas: By choosing the right film, getting more and more used to working with old cameras and having professional scans from the laboratory, the quality of the pictures is actually pretty good. Sometimes the weather on the day was less good or the light less flattering, so you’ll get a poorer result. It’s a pity but that’s something we have to live with. We make some adjustments to push the outcome in such cases, but we try to stick to things you could actually do in the darkroom, too. Everything else would make no sense and we could not keep publishing one feature a week if we put much time in post-production. Lola Who: What type of equipment do you use?
Chiara: At the moment Thomas is using three different cameras: a Nikon F801s (35mm) from the 90s, which is fast and has almost all comfort of today’s digital cameras, a 6×6 two-eyed medium format Mamiya, and a very old 4,5×6 medium format Zeiss Ikonta, which has no comfort at all but makes incredibly beautiful pictures. Lola Who: Do you feel that the modelling industry lacks a certain aspect of honesty and creativity?
Thomas: We are not models, so we are not really in the position to speak strictly for this side of the business. But we can say that models are often gifted with creative skills, or are at least very interested in the arts. They are young, curious, and smart. Some paint, dance, act, play an instrument, or writeso we can’t really testify a lack of creativity on their side. But the modelling industry at large is still on the safe side nowadays and very marketing-driven. This affects choices in model-casting and art-buying alike. There’s a lot of quoting, referencing, even copying. People seem more concerned with the choices of others than with their own, thus breaking the creative process as a whole. We would be very happy to see more diversity on all levels, from body types to photographic styles. When it comes to honesty, we have experienced very good relationships with many models and agents. We agree on the fact that more transparency within the whole industry would help make it better and a little less glamorous on the outside. Because, to be honest, being a model is all but glamorous in the everyday. Just like being a creative in the fashion industry. Unless you were leading a glamorous life before working in the fashion industry, you should rather look out for other perks to keep you going. There is a tiny chance that you may win the fashion lottery and be catapulted to stardom, but as with any lottery, winning is more unlikely than not. Lola Who: Would you say that this project intends to comment on the way women are often portrayed in the media?
Thomas: Sure! The picture of women in the media is distorted on so many levels. The problem with our capitalist mass culture is that the clients of most media aren’t their readers/viewers/users, but their advertisers. And the female body is an excellent vehicle for almost any kind of advertising. So there’s little interest on the part of the media to depict women in an authentic way. Advertisings oldest and still most powerful rhetorical device is hyperbole, i.e. exaggeration: in order to sell a product the female body is usually sexualized and over- or under-reshaped by different means. The problem with this dynamic of the perfect body is that the images are being inscribed into the self-conceptions of entire generations, thus creating armies of discontent people who are striving to reach impossible ideals. The glossy surface of consumer culture makes us constantly slip and fall, that’s how marketing works. You’ll eventually spend more money if you feel some kind of lack or deficiency. With “Models in the Raw” we want to show something beyond the selling strategy, that’s why we let the models chose the way they present themselves, and we don’t push them in a certain direction for the photos. Lola Who: How many models have you photographed so far and what is the most interesting story that you’ve heard through your interviews?
Thomas: 51 models are online on modelsintheraw.com at the moment. We’ve done 60 shoots so far, and the next ones are already in the making. There is actually a lot of good stuff in the interviews. And it’s very interesting to get to know how models reflect on their situationit is in some ways a life out of the ordinary, with little securities and no real routine. Some stories do not make the cut for obvious reasons, though. Like the one from a model we’d like to keep anonymous, but it’s again a supreme example for how this industry works. She was booked as a body double to set up studio and light and everything for a celebrity shooting set to take place on the following day. In the end everyone liked the model’s shape more than the celebrity’s, so for the final images they copy-and-pasted the celeb’s head onto the model’s body. That’s how you can make yourself a star, we suppose… Lola Who: Wow, that’s a bit intense. Has this in any way changed the way that you view models and the modelling industry?
Thomas: Not really; rather, it has endorsed the premises. We always knew that there is much more than meets the eye. But in the process of searching for a way to convey more depth, our own way of working has changed drastically and this is now affecting our commissioned work more and more, tooit’s all getting more and more “in the raw.” Lola Who: You have chosen to document the process as it goes, allowing the public to see it as a work in progress. What made you decide to do this?
Thomas: We loved the idea of combining the slow technique of film photography with a fast-paced medium like the internet. Instead of shooting over months and then presenting a whole project, we wanted to do something more like an online magazine with regular weekly updates. Lola Who: What do you hope to accomplish through “Models in the Raw”?
Thomas: On a large scale we’d be happy if our little project influences [peoples] views of the fashion biz and on women in general. For us personally, we have already grown a lot through it and we can’t wait to make a nice photo book with all the models we have met for the project.