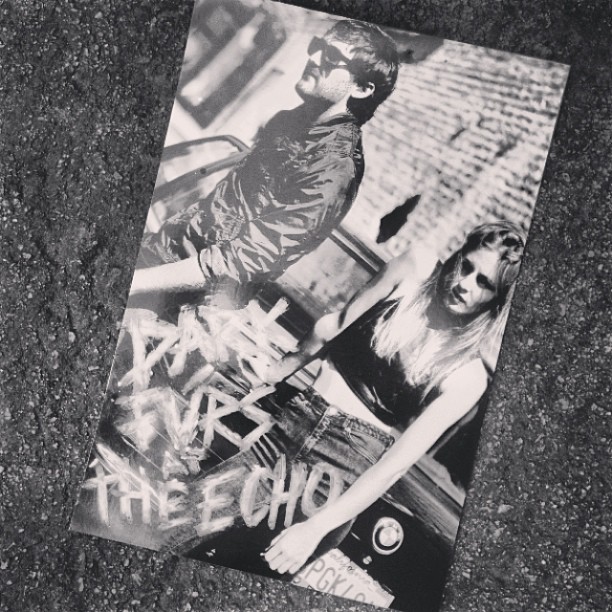 With Suzanne Mays powerful vocals and moody instrumentals, Dark Furs sound like an elegant and tormented reverie. Based in Los Angeles, the duo, featuring the London-born singer and keyboardist May and guitarist Chad Phillips, have recently released their second EP “En Lair”. Recorded and mixed at the Jim Henson Studios in Hollywood, the sound is simply amazing! Dark, sophisticated, and a bit anxious. May took the time to answer some of our questions.

Lola Who: When did you move to LA and what prompted that decision?
Suzanne: I actually never intended to move here, it kind of just happened. I did an acting program, and ended up getting some work and decided to stay. So, originally it was acting that brought me here.

Lola Who: How did you meet Chad and start making music together?
Suzanne: I was looking for a guitar player to work with, and he was looking for a singer. So we sent each other our own work via email and liked what we heard! We work a lot online and send ideas back and forth for the other to write to.

Lola Who: Can you tell me a bit more about your musical background?
Suzanne: Well, I’m from a musical theatre background. That used to be my dream! I studied at the London Studio Centre and sang, danced, acted every day. I can change my voice and sing in a lot of styles. I started off singing R’n’B, jazz, and show tunes, so Dark Furs is quite different.

Lola Who: Whats your creative process when making music? I read somewhere you both live quite far from each other
Suzanne: We used to for a while. Chad actually just moved very close to me, but we still work the same way. Mostly, Chad will email me a guitar idea and I’ll write a melody, vocals and put keys to it. Once we’re happy with that stage, we rehearse it live and write a drum part with our drummer. I always think it’s important to have fresh sounding melodies. I love a good contrast, for example, if the song sounds happy, I’ll look for darker lyrics and a more masculine sounding melody line.

Lola Who: Whats different on your second EP En Lair, compared to your first EP?
Suzanne: We had a stronger idea of our sound. We just got really specific and added a lot more details that I think enhanced the experience of the songs.

Lola Who: Is there something that you do differently now?
Suzanne: I’ve learnt to trust my own taste. I’ve developed a sense of what I like and what I think the music needs or doesn’t need. I’ve become proud of my idiosyncratic tastes, whereas before I used to second guess them.

Lola Who: How was it to record your music at the prestigious Jim Henson Studios?
Suzanne: Amazing. It was really inspiring to work there with all its history. I love the ’70s vibe it has. Nico Essig, our producer, was really great to work with, and we got to experiment a lot with different ideas.

Lola Who: Can you name me a few of your favorite bands?
Suzanne: Todd Rundgren, King Krule, Joy Division, Tame Impala, Carol King.

Lola Who: With titles such as En Lair and French Love, you seem to have a keen interest in French culture. How did you develop that interest? Do you speak French?
Suzanne: I think I get it from my mum who loves French culture. I aspire to be French. I love their style and language. En L’air is a ballet term and French Love came from me sounding like I was speaking French when I sing a certain part of the song.

Lola Who: How would you compare the music scene in L.A. and London, from an insiders point of view?
Suzanne: I actually don’t know much about London’s scene, as I’ve been here so much, but the LA scene is really exciting. We have awesome venues and great opportunities for new artists to be heard. Therere a lot of great new bands right now.

Lola Who: How has living in California influenced your music overall?
Suzanne: I’m not sure. I do know that people I’ve met in California have influenced my music a lot! I don’t think it’s the place, it’s the way I’ve felt that has been the main influence.

Lola Who: Whats in store for the fall of 2014?
Suzanne: More shows… and writing. I have a lot of writing to do!