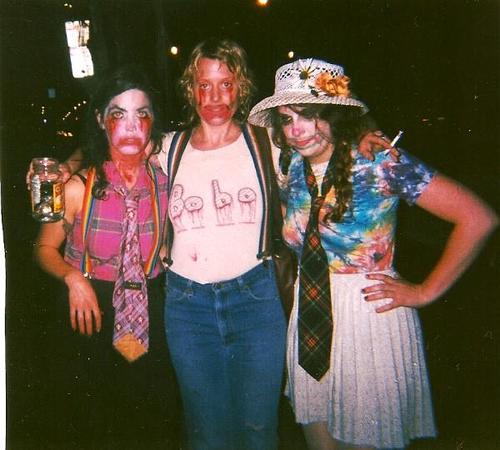 The Sandwitches have what I can only describe as a unique grungy, spooky siren song of the end of days mixed with hope for tomorrow sound. Yes, thats what Ive come up with after much listening and soul searching. One year after forming, they released their first album “How To Make Ambient Sadcake” in 2009.  Having just discovered them, I  sadly learn that they are releasing their final album, “Our Toast,” on June 9th via Empty Cellar Records. But never fear, this three-piece garage-folk band from San Francisco comprising of Heidi Alexander, Grace Cooper and Roxanne Brodeur have a healthy back-catalogue to parse through, as well as exciting solo projects to explore. We had a chat with them about their influences, the music scene in San Francisco, and where theyre all going now.

Lola Who: What lies behind “Our Toast”? Are there any specific events or influences that helped it come into being?
Heidi: Just the natural passage of time and events, and we had wanted to work with Kelley for a long time.
Grace: We knew we were going to make one last album. The songs had been coming together for a little while. The lyrical content of the songs, like all our other albums, were inspired from our personal lives.

Lola Who: Why is this your last album?
Heidi: Because the band is over. Our interests were divided and it became unsustainable.
Grace: We just came to a very natural close. Everyone was one leg into the next place in their life. It was actually nice how natural it was.
Roxanne: We had a great run and everyone has grown/gone in a different direction; babies and graduate school… It was just a feeling; like the time had come for each of us to have space and work on solo our projects; be it music, art, businesses, relationships, etc.

Lola Who: You guys have been together for seven years. Is it going to be hard to go your separate ways? Or will you continue to make music together in different ways?
Heidi: Weve been parted for a long time but we’re all still friends and probably always will be, so its really no big deal. Everybody got to do what they really wanted to do, and we have this wonderful collection of records and experiences far beyond any of our expectations.
Grace: Wrapping up the album was pretty unceremonious. There were no dramatic goodbyes. Plus, we’re happy for one another. . I know I’m going to cry after our last record release show. There will be tears, but we know we’re all still around for each other. We’re all still doing music.
Roxanne: I will always feel sentimental about The Sandwitches. It’s like a breakup with a very intense relationship. We have already played a show with each of our solo projects (Pruno Truman, Grace Sings Sludge, Roxanne Roxanne) and it feels comforting to me. I love these ladies and the time we shared playing music live and in our Tenderloin practice space. Lots of ups and downs, but that’s life, right?

Lola Who: How do you think your sound has changed over the past seven years?
Heidi: Id like to think that we have matured, both musically and lyrically, but Im not entirely sure thats true.
Grace: We sound like refined older ladies.
Roxanne: To me, the song-writing seems to have gotten more intricate, and the vocals have more range than in the first album.

Lola Who: What is the San Francisco music scene like? Does it feel like a supportive environment?
Heidi: It was fantastic. Very rich and complicated. Honestly, Im not really sure what its like now. I know there are still a lot of great players and some great bands. A lot of people also left on account of changes in the city, but these things tend to be cyclic.
Grace: It was definitely a supportive environment for us. Just looking back on all our releases you can see that almost everyone we worked with was a local person.
Roxanne: In 2007, when I first started playing music in San Francisco, it felt very open and awesome. Everyone I met was super talented and nice, which made me pursue music even more. Grace and Heidi have always been very encouraging in my drumming and song-writing. It means a lot coming from such talented women.

Lola Who: Grace, are you going to continue with your solo project Grace Sings Sludge?

Grace: Ooh yeah! Just cleaned out the ol’ garage band to make room for some new crap. Also, Empty Cellar will be releasing an album of my songs from a couple years ago “Life with Dick”. I really hope Sandwitches fans seek out our solo stuff. Heidi performs and records as Pruno Truman and Rox has a tape out too under the name Roxanne Roxanne.

Lola Who: Do you think we live in a more difficult time than others to live as artists and musicians due to the ever-increasing price of living, affordable housing, and the like? Or do you think there have always been challenges?
Heidi: No. I just think were more prone to think of struggle and strife as undue parts of life. If we lived in a different part of the world, or were part of a different demographic, we might be up against more serious challenges. Id say that were exceptionally privileged. I think the real challenge for contemporary art is just to have any sense of what is going on. Its a complicated world. I think the difficulty and also the opportunity is in knowing what youre trying to do, or maybe even just doing anything at all.
Grace: That’s a good question, but beyond my experience to try and answer. I do imagine the struggle has always been real.
Roxanne: Personally, I think there have always been challenges and it may actually be easier now because of the internet and computers.

Lola Who: Are there any notices about your individual futures going forward or about the last days of The Sandwitches that you want to tell our readers about? Wed love to know whats next
Heidi: I have a Pruno Truman French language record coming out some day sooner or later, and more E.G.H.B. in the works.
Grace: As the Sandwitches, we still have the “you only get what you want ” 7inch out soon on Southpaw and an EP of four unreleased bummer songs on Empty Cellar out soonish so yeah there’s that. And here’s my bandcamp and Tumblr.
Roxanne: I’m working on my online art and craft shop on Etsy called RoxanneRoxanneYoung in between taking care of my 2-year-old and keeping up my music project called Roxanne Roxanne.