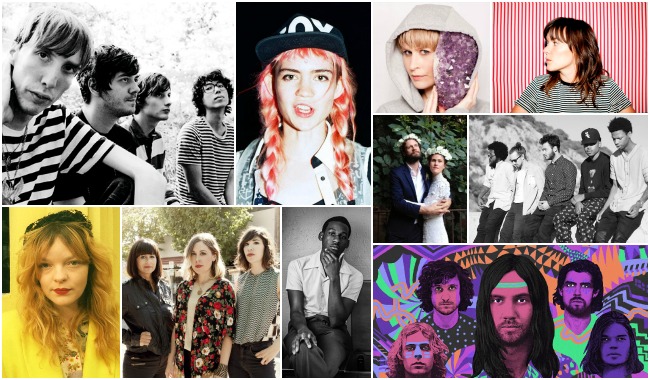 After hours spent standing by the window gazing out into the metropolis, we at Lola Who have decided that 2015s number one album is Fading Frontier by Deerhunter. Aesthetically, the album shifts in sound and instrumentation (traditional to synthetic) from track to track. However, this does not reflect any lack of focus but rather an endearing curiosity. From the breezy guitars of All the Same to the electro waltz of Take Care to the power funk of Snakeskin, Fading Frontiers is like watching Bradford Cox try on a bunch of outfits for a big date.  His date in this analogy is the rest of his life. Gone is any anger, any alienating elements and whats left is one of Deerhunters most welcoming and stirring album thus far. So Congrats! Your ribbon is in the mail.

Fans of the marshmallowy psychedelic sound of 2012s Lonerism and Kevin Parkers buttery Lennon-esque vocals will like Currents. The songs are again brilliantly crafted and expertly producedsoaring, though grounded by a crisp and boisterous rhythm section. Parkers newfound electro instincts are explored as the album boasts some pretty impressive, otherworldly synth programming. The album opener Let it Happen is a raucous contemplation about needing to control your own fate that unleashes a next-level synth riff three minutes in.

3. Jessica Pratt -On Your Own Love Again

When Jessica Pratts self-titled debut materialized in 2012 with its spare acoustic arrangements and haunting melodies, it was with an aura of mysticism. With her siren-like harmonies and rustic aesthetic, her music seemed of a different time or… a different world. In this years follow-up “On Your Own Love Again,” Pratt continues to bear an uncanny resemblance to her influencesmainly Joni Mitchell, Nick Drake with a touch of Kate Bush. Pratt is a student of these artists and has reworked their sounds and ideas organically to fit her own vision. The single Back, Baby is an upbeat yet mournful breakup song, the reminiscent and refreshing sound of which can only be described as timeless.

In 2012, irresistible hipster blowhard Joshua Tillman, former Fleet Foxes drummer, released his second album Fear Fun as Father John Misty. “Fear Fun” has an unhinged, funhouse, or circus-like sound that Tillman explores through lyrics about drugs, sex, religion and artifice in Hollywood. Unexpectedly, his follow-up album is much weirder. “I Love You, Honeybear” documents Tillman forsaking his #bohemiandream ways to settle down with his now-wife. And it’s not just weirder but more raw and acerbic, though ultimately sweeter and more poignant. “I Love You, Honeybear” is not a perfect album. Theres an off-putting electro misstep in True Affection, and lyrics are often too wordy and awkwardly multisyllabic. On the other hand, Tillman needs a lot of words to express the cognitive dissonance that exists between is love and marriage.

The Social Experiment is a Chicago-based musical collective led by trumpeter Donnie Trumpet backed by Chance the Rapper. Their debut album “Surf” gave the world an informal follow-up to their breakthrough mixtape “Acid Rap.” This titular experiment is Donnie, Chance and their musical affiliates coming together to create positive, soulful, youth-driven, bouncy (though occasional jazzy and orchestral), and objectively good music. And most would agree it was a roaring success. With a staggering guest list that includes Janelle Monae, Erykah Badu and J. Cole, “Surf” is unrelentingly interesting and is sure to get a party started. The cynics in all of us may become wary of the albums overwhelming positivityI dont wanna be cool/ I just wanna be me shouts Chancebut only at a distance do we cringe at its willful unedginess. When the record is on, even the most morose music snob (who listens exclusively to sub-genres with two or more qualifiers i.e. psych-thrash-hair-pop) will be hard pressed to refuse the blissful optimism of “Surf.”

Ruban Nielson, frontman of Unknown Mortal Orchestra, former polyamory practitioner, makes vivacious psych-soul music in his basement. He and his wife were involved in a thrilling though emotionally trying three-way relationship involving another woman. During and following their domestic love-triangle, Nielson wrote and recorded his captivating release “Multi-Love.” Simple formula: something sexy and confusing happens in your life; you write a bunch of really good songs about it. Piece of cake. If youre unfamiliar and interested in the subject of polyamory then “Multi Love” is as good a starting point as HBOs Big Love. The point is, regardless of your lifestyle choices, “Multi-Love” is a treat, the kind of album you immediately take to, shocked that you havent heard it yet.

“Apocalypse, Girl,” the latest from the Norwegian singer Jenny Hval, is executed with utter freedom: free of genre, free of mainstream convention, free of fear, and free of rhyme-schemes. Disclaimer: this album is not literally freeit goes for $9.90 on iTunes, but if you buy it youre free to listen to it as many times as you want. In her light but powerful voice, Hval glides through clever, stream-of-conscious lyrics, reeling off jarring non-sequiturs and hilarious yet insightful questions, like What is soft dick rock?

Grimes had a tough go in 2014. Her single Go, originally written for Rihanna, was met with widespread disappointment as an apparent bid for crossover success. She criticized the ALS challenge and people with ALS told her she was the worst person. Meanwhile, she made an entire albumher would-be follow-up to the critically adored Visionsbut decided to scrap the entire project because it sucked. All this makes Grimes 2015 album’s definitive triumph all the more triumphant. Art Angels is a visionary and singular masterpiece that demands repeat listens. There is truly little to compare it to. Its Aphex Twin-level electronic music mastery. Its 90s pop completely reimagined. Its a kaleidoscope of sounds and influences. Its underground music with stadium-sized ambition. Its a bold artistic statement. Long live Grimes.

If you were recently in your local beard barber shop or BBQ sauce saucery and heard a song and thought hey cool, its the new Black Keys! Well not quite! Its singer Dan Auerbachs new side project The Arcs with whom he can finally channel his varying musical ideas outside of The Black Keys. What originally was a solo project for Auerbach would ultimately include Leon Michels, Richard Swift, Homer Steinweiss, and Nick Movshonwho each have writing credits throughout the 14-track album. Though Yours, Dreamily has some interesting desert rock and spaghetti western elements, and is perhaps a bit sonically spacier than what were used to with The Black Keys, Auerbach mostly sticks to what he knows. And for that we should be thankful.

You might not think that youd necessarily want to hear someone rehash the exact moods, sounds and sentiments of soul music icons Sam/Otis/Aretha when you can just listen to them do it. That is until you hear Leon Bridges. He has a voice thats oddly reminiscent of Dan Auerbach’s from The Black Keys, though Bridges’s is more fluid, airier, and seductive. The songs, in all their reverberant glory, are so highly effective in their recreation of vintage soul music that some are liable to end up on a golden-oldies compilation by the end of the year. Its actually pretty weird and awesome at the same time that Bridgeswho wears tight slacks and an old-fashioned bowling shirt on his album coverunironically wrote a song called “Twistin and Groovin” in 2015. Real question: Was he cryogenically frozen in the year 1962? However, songs like Lisa Sawyer best show Bridges as a gifted singer-songwriter instead of just Sam Cooke 2.0.

11. Sleater Kinney -No Cities to Love

I think we all wondered, when the new Sleater Kinney album was announced earlier this year, after five great seasons of Portlandia are we ready to stop laughing at Carrie Brownstein. After so much time spent associating her face and voice with laughing at it, will we be able to forgo our bodies kneejerk reactions and listen to serious rock music? Well let me tell you that when I pressed play on “No Cities to Love,” I personally didnt laugh once. I was immediately head bobbing with a scrunched-up facial expression. Corin Tucker, Janet Weiss and Carrie Brownstein each took a long hiatus to pursue side-projects of varying funniness but they’re back! And they may have put out the best and least-funny rock album of the year.

The musical equivalent of laying down in the warm shallow water of a beach and letting the tide wash over you and pull back, Beach House is back with a new batch of songs to have enchanted, whimsical day dreams to. There are immaculate pop hooks within Beach Houses layered string synthsand Victoria Legrands vague poetry is actually quite irresistible actually. But they let themselves be discovered by the listener rather than pray upon our attention like todays mega-pop.

Zach Condon is so dreamy and worldlylike that friend or acquaintance always just back from a thrilling trip across the world. It seems that with each new Beirut project, Condon would return with more exotic sounds, a newly acquired musical skill, increasingly complex instrumental arrangements. That is until now. With No, No, No Beirut takes a step back from their escalating ambitions of arrangement and energy and delivers a refreshingly toned-down record. Though the title track is illustrative of Beiruts signature ornate sound, the rest of the album offers a more stripped down, emotionally bare approach.

Dilly Dally is exactly what you shouldnt do when getting to your nearest record store or preferred streaming service to check out Sore, the debut album by the Toronto soft-grungers! Front-woman Katie Monks sings with utter disregard for haters and the well-being of her vocal chords. Imagine that Karen O got sloppy drunk, punched Francis Black off the stage, and started singing for the Pixies. A) thats a dope thing to imagine, and B) that gives you a faint idea of what Dilly Dally sounds like. Though this is all very well-trodden territory (free-wheeling youngsters with a taste for loud, distorted guitar music), Dilly Dallys succeeds in instilling an intangible newness in their sound that makes us vigorously head-bang like the 90s never happened. Though Sore opens with the filthy Gigantic-esque banger Desire, it finishes with the unexpected and atmospheric piano ballad Burned the Cold.

Barnetts music is for the most part, of the raucous and grungy variety. She makes the type of tracks that can be slogged through, drunkenly strummed and coarsely vocalized, her deftness as a lyricist doing the heavy lifting. Most of the tracks on SISTSIJS, as true #CBfans refer to it, are pretty terrific. The moment in Pedestrian at Best when she sings, I think youre a joke/ but I dont find you very fu-uh-uhh-uhh-uh-uhh-uhh-uhhneeee! is just the tops. But its when the album takes a breatherwhen we stop lightly moshing and start lightly reflectingthat were given the true standout. Depreston is Barnett at her most melancholic state. Her vocal delivery is like the suburb she considers moving to in the song, monotonous yet beautiful. Almost as addictive as her previously mentioned delivery of Funny is her delicately uttered per-coh-laaatt-errrr the one which replaces her hip city coffee shops and saves her twenty-three dollars a week. The song is a poignant reflection on humble living and modest opportunities. Her dream is simple and attainable: to save up enough to knock it down and start rebuilding.

It takes minute, when diving into “Half Free”while initially grooving to the disco-infused future-retro sound that Pitchforks Stuart Berman describes as part Shangri-La, part Sun Ra before you realize that theres some pretty heavy stuff happening lyrically. Its right around the time of the first refrain  “Now I’m going to hang myself/hang myself from my family tree” from the opening track Sororal Feelings, about a woman married to a man who already played the game with her two sisters prior. In the following eight tracks, Meghan Remy sings as several women, spinning dark and grimly detailed stories about the shared trauma of half freedom. The result is full excellence.