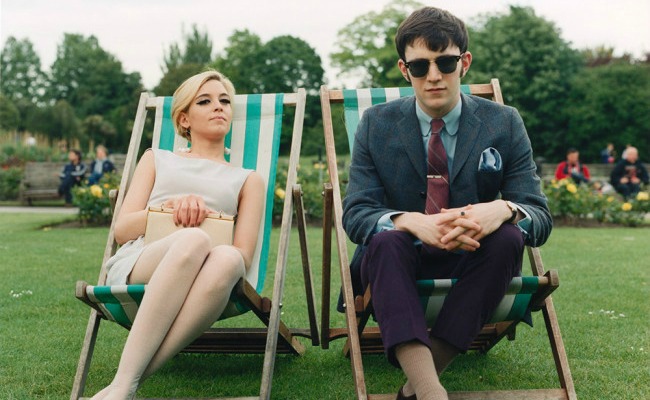 Carlotta Cardana’s ongoing photographic series “Modern Couples” depicts couples, that she met at Mod events in London, who participate in Mod inspired style in contemporary culture.  Moda derivative of modernist is not just a fashion style, but an identity and way of being that is a culture in itself and a reflection of the individuals. According to Cadarna, Mod aesthetics is about the subculture and all of its elements; the fashion, the music, the scooters Each couple in this project chose their environment to be photographed in; their clothes, the furnishings, etc. It began as a youth subculture in Britain during the early 60s and its influence on fashion is still felt today. Trousers and ties, tailored suits, chunky and angular patterns, and of course, Vespas. Mod style is noticeable for its prim and proper exterior; tailored suits, trim cuts.  Iconic fashion designer, Mary Quant, became an important figure in the Mod movement. She coined the word “youthquake” to describe what was going on in the world of fashion and sought to liberate women from the long skirt and cardigan with simple and innovative designs, including ready-to-wear dresses, colored tights, plastic garments, and her most celebrated clothing item, the miniskirt.  Today, Mod is part of a fashion resurgence that brings the past to the present as a response to other styles, and Carlotta’s project calls out to the old souls” and the nostalgics of this world, those whose taste for fashion is put-together, tasteful and eclectic.