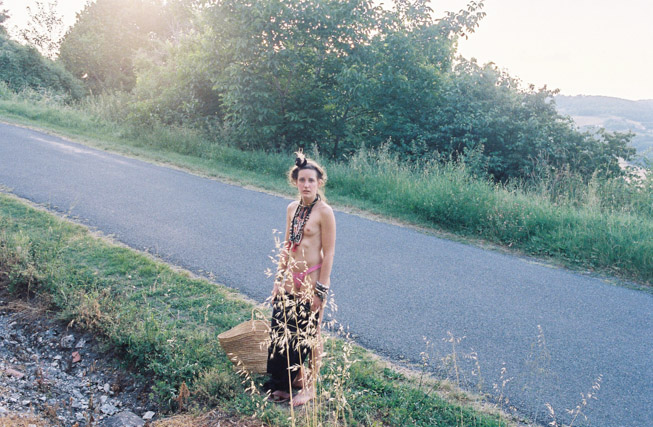 Dreamy, personal and pure is how Sophie Van der Perre, 27, would describe her photographic style. When studying at the Royal Academy of Art in The Hague, Netherlands, she learned how to shoot and select the right images. Now based in Amsterdam, Sophie likes to be surrounded by her muses. Here, she tells us more about the day she spent with Milo, walking around the streets of Beauville, France.

Lola Who: First of all, who’s Milo and how did that photo shoot happen?
Sophie: Milo is one of my muses. I’ve been shooting her for a couple of years now, and we both really enjoy nature. So, when her mother moved to France, we decided to pay her a visit and do a photo shoot for a couple of days, just driving around. The photos were all taken in Beauville, in the South of France. I’m thinking about going back this year and doing another shoot there.

Lola Who: Who did the styling?
Sophie: Milo has great style and did all the styling herself.

Lola Who: Do you have a favorite place where you like to take photos?
Sophie: I like nature and old houses. Places with character.

Lola Who: Are you working on a new photo project?
Sophie: I’m actually working on a book about my three muses: Milo, Bamboo and Sarah. I’m very excited about this project and hopefully it will come out later this year.

Lola Who: What are your plans for this summer?
Sophie: Im working on several shoots for magazines and brands. In between, I will definitely go to some music festivals. I will be travelling a lot and doing occasional trips with friends to the countryside.