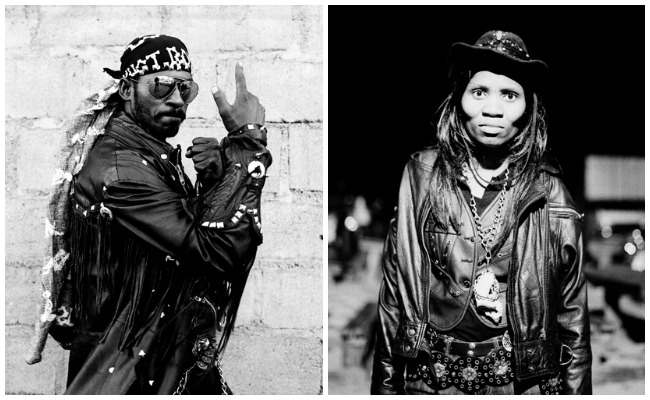 Through the Sub-Saharan desert, where elephants roam and local village boys kick around a plastic bottle on a dusty afternoon, you can find what many would consider an unlikely sight; a gang of men and women clad in strictly dark tones lean against their motorcycles, bend over to shine their rugged leather boots and fiercely studded oversized belt buckle. Meet the edgiest but most respected crew of Botswana: The  Metal Heads. South African photographer Frank Marshall set out to Botswana in 2008 to accompany a heavy metal South African band. When he arrived to the city of Gaborone, he was surprised to find such a vibrant heavy metal scene. He was so influenced by it that he went back a year later to focus his thesis on the “Botswana Metalheads,” creating a series of portraits he titled Visions of Renegades.

In present-day Botswana, rage t-shirts of metal kings such as Iron Maiden and Black Sabbath can be spotted, blended with a wild wild West aesthetic that adopts cowboy hats and patent leather jackets. And its not just about the look, these groups are often seen as figures of the community, taking social responsibility into their hands to protect villages and keep enemies out, with younger generations looking up to them as leaders that are totally super cool.

Marshalls portraits depict a raw sense of brother and sisterhood amongst these biker gangs, where his subjects are an ulterior emergent rootedness where traditional identities and political histories in Botswana are subverted. His work brings light to a movement that breaks down barriers of stereotypes that Eurocentric power structures within the music scene tend to create.

Much like when Patti Smith and Bikini Kill urged the world to reconsider the ideal of a Heavy-Rock culture dominated by men, Marshall wants to get rid of the generalization of Caucasians constantly being one under the spotlight of the industry of Sex, Drugs & Rock & Roll. So don’t be so surprised when you see an African man onstage at a darkly lit metal club in Seattle, screaming at the top of his lungs with a Schecter guitar under his arm, and simply shredding it.

You can check out some of Botswanas Death Metal bands here.