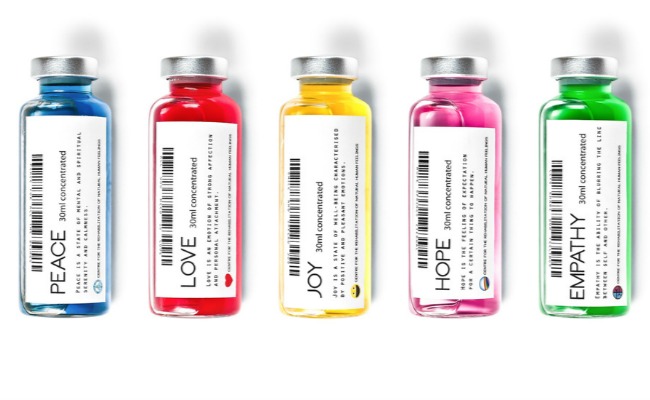 Valerio Loi was inspired to create the Human Feelings As Drugs project when he recognized there was a difference in the pharmaceutical systems between his hometown in Italy and the UK. When Loi moved from Cagliari to London, he realized that medicines were much more accessible there than they were in his home country. Inspired by this contrast, Loi decided to literally bottle these emotions and make them as metaphorically accessible as every day pharmaceuticals. Lola Who talked to Valerio Loi about Human Feelings As Drugs, a project in which emotions seem to be the cure for a hectic lifestyle, a high-stress society, and a lack of real human interactions.

Lola Who: How were you first inspired to create your project Human Feelings As Drugs?
Valerio: When I first moved to the UK from Italy, in 2009, I started seeing the differences between the pharmaceutical systems in each country. In the UK, drugs are more accessible and available at the counter, while in Italy the majority of drugseven what is commonly considered saferequire a doctor’s prescription. I found this difference quite interesting since it implies that people in certain countries have the freedom to self-evaluate what medicine they should use to solve certain health issues.

Lola Who: Can you explain the significance of the idea of bottling up emotions?
Valerio: I have the feeling that many of us have a lot of pent-up and bottled-up emotions, and often circumstances don’t help us express or get rid of those bottled emotions… So instead of keeping all of those feelings boiling up inside of ourselves, I thought that a high dosage of some of the most basic human feelings could help express what we really feel inside. Also, in an ever developing world striving towards innovation, I think this idea is something that we can easily envision being real in the future.

Lola Who: What are some thoughts that came to mind when you view your project?
Valerio: When I finished my project, I really liked how I was able to shape the idea and give it form. I didn’t really know how it was going to be perceived by the public. In fact, I had kept the use of words to a minimum in order to let the viewers interpret the work as much as possible. Many viewers gave the project a slight romantic interpretation, while others drew comparisons to Aldous Huxley’s Brave New World, which must have influenced my work in some way.

Lola Who: Which drug from your Human Feelings as Drugs project do you think is the most vital for humanity?
Valerio: As difficult as it may be, the feeling I would prescribe to humanity would be empathy. In a way, it includes all of the other ones, and empathy is necessary to be able to establish true connections between human beings. With a deeper understanding of the hidden emotional processes inside of other people, we would be able to avoid hurting each other and being hurt.

Lola Who: What human feeling would you most likely get high on?
Valerio: As I answered in the previous question, it would be empathy. It is necessary to enable all the other good feelings. Right after that, I would get high on love, since I consider it really hard to feel true and pure love for another human being.

Lola Who: Much of your work consists of taking something intangible and creating something tangible for it, such as your other project Web Popularity Products. How did you come up with this concept?
Valerio: I see my creations as items that could possibly be available for purchase in the near future. Many people want to be happy and stress-free. They want to smile and be connected to other people around them, and this happens both in real life and within social networks. Since we live in a market-driven society, these bottled feeling available for purchase could become highly desirable and accessible goods.

Lola Who: How do you personally deal with a hectic lifestyle and a high-stress society?
Valerio: I haven’t found a unique cure for it yet. I always try to balance daily stress with my passions. I am definitely the type of person that needs a lot of time for himself in order to find a sense of calmness and to see things clearly. Photography helps me a lot because it allows me to channel and express what I can’t easily convey through writing or through spoken word.