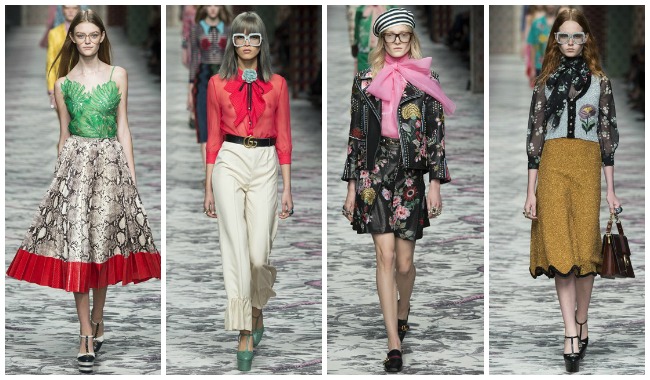 Madeleine de Scudérys 1654 book Carte de Tendre sets the mood for Guccis Spring/Summer 2016 Ready-to-Wear show, the second by new-ish Creative Director, Alessandro Michele.  Michele was relatively unknown at the time of his appointment a year ago; however, he was previously head of accessories design at Gucci and has been at the design house for more than a decade.  So its not surprising that accessories played a major supporting role in this show.

But the unmistakable stars at Guccis show were love, travel and prints; Carte de Tendre means Map of Love.  Micheles collection doesnt have the brash sexuality of Tom Fords Gucci designs or the polished sophistication of Frida Gianninis.  Instead, this interestingly eccentric collection, featuring male and female models, was full of huge, thick, square-framed 1970s style glasses, frilly tops buttoned all the way up and ethereal see-through fabrics.  Most of the designs featured multiple bold patterns inspired by a different type of jet-setting lifestyle: Asian motifs like lily pads, peacocks and koi fish on one outfit, a skirt with printed animals like those on ancient Grecian urns, your Grannys dining room wallpaper on a dress, and printed snakes (not snake prints) on a Spanish-themed suit.

The romantic elements of the show included delicately ruffled collars and pleats, pastel colored rosettes at the collar, lots of pussy-bow blouses and soft rose-colored fabrics that were set off against vibrant prints, Guccis trademark green and red, and a few bold sequined designs.  While there were touches of the 1970s via pleats, flairs, platform peep-toed high heels, giant glasses and bowl haircuts, as a whole, the show wasnt definitively tied to a single time period.

The geeky, quirky and fun show has been very well received .  The collection is undeniably interesting and cool in a slightly frumpy way.  Expect more of the same from Michele who has firmly moved away from Guccis traditional sexy, slinky dresses, black and gold designs, and the ubiquitous double-G logo patterns.  The new Gucci is at the same time dreamier and more earthy.