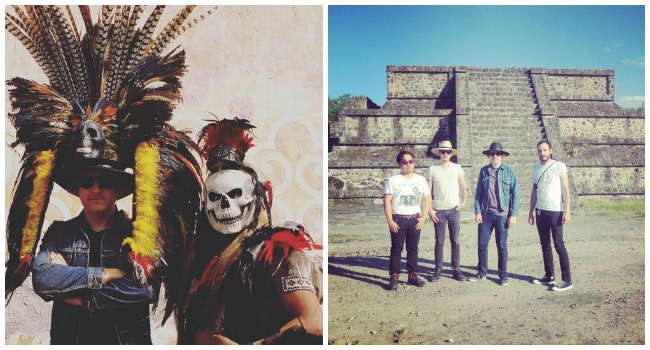 The High Dials came to the fore in 2003 out of Montreal. For twelve years they have entertained and intrigued audiences with their ever evolving sound. This past autumn, they embarked on their first ever tour of Latin America, playing shows in Mexico and Colombia. In this interview, Trevor Anderson of the High Dials discusses their South American tour in Mexico and Colombia, their most recent album “In the A.M. Wilds,” and why he thinks categorizing music into genres is reductive.

Lola Who: This past November you went on your first tour of Latin America. What brought you to Mexico and Colombia?
Trevor: We were invited to play a festival in Mexico and things developed naturally from there. I had always wanted to get to Latin America with the band. Ive bummed around there a fair bit on my own, and a lot of those experiences left a mark on the music and lyrics, particularly Colombia.

Lola Who: Did you get to see much of the cities in which you played or was it a get in and get out kind of affair?
Trevor: We had plenty of time to chill out, meet people and get into trouble. We sat on pyramids, swam in rivers, passed out in the street, went to art exhibits, ate dodgy things.  We even received an Aztec blessing!

Lola Who: How did you find the audiences there? Were they markedly different in any way to other crowds for which youve performed?
Trevor: Yes, the audiences were very different! Perhaps because we had the chance to play smaller towns like Cholula in Mexico, and Rionegro in Colombia, the crowds were refreshingly unjaded and very warm. Less hipsterism, more ordinary people experiencing music in an open-minded and genuine way. I love that people in Latin American can still speak of rock music rather than post-something. Im generalizing of course and by no means are music fans there any less sophisticated. They are just coming at pop from an entirely different context so there is a nice lack of irony, and I suppose they really appreciate how far we came to perform.

Lola Who: Were the Mexican and Colombian performances similar or dissimilar to each other in any manner?
Trevor: I felt the difference more in small towns vs cities. The urban crowds were more familiar with where we were coming from, even though we still felt like aliens. In a place like Rionegrowhere it was all ages, and we were sandwiched in between black metal, electro-goth and a Nirvana cover bandwe really stood out. The crowd probably didnt know what to make of us. That was a great feeling and kind of the whole point of the tour for mesome mutual discomfort for the band and the audience. The response was really good everywhere we played. And meeting other bands was also great.

Lola Who: Did the tour, in any way, have anything to do with the song “Conquistadores”? Or am I just desperately searching for a pattern and the Latin American-themed title of this track is entirely unrelated to the tour?
Trevor: The video for “Conquistadores” just happened to be ready as we were leaving on tour so it was a happy coincidence. But the song and video from the “Desert Tribe” EP was obviously influenced by Latin American stuff, everything from cumbia to Jodorowsky. It kind of became the theme song of the tour, closing our set every night.

Lola Who: The High Dials are well-known for the evolution of their sound: retro 60s Mod-rock to power pop to shoegaze etc. Is this progression intentional on the bands part or is it something more organic, or even happenstance?

Trevor: Well, to make an intentional progression over 12 years you would have to be very foresighted! The only artist to have maybe planned his evolution in advance is David Bowie. He seems to have his shit together and probably has the ability to see the future Basically you change as a person over the years and the changes come through in the music. Our first record sounds the way it does because we were intoxicated by freakbeat and 60s pop yeah, but also because we were basically suburban kids. I hated it at the time when critics said the album sounded innocent, but looking back I guess they were right.  As life happened and we grew, the music grew in parallel. How could you continue to sound the same? People who do that are either fully developed from day one, only like one kind of music or approach it superficially. Looking back, each album feels right and makes sense in progression, though people may not always see the connection or expect the direction. I hope we will get to do a compilation that ties all our of our work together. For me, there is a thread running through everything. All the influences you mention were there right from the start to some degree, but somehow people always hear what they want to hear and disregard the rest.

Lola Who: Earlier this year you released your album “In the A.M. Wilds.” The album was well reviewed by several publications. Were you happy with the response?
Trevor: I cant say I ever enjoy reviews, good or bad. All that hard work reduced to a paragraph and a score! There are always a few thoughtful ones but in general, unless you are Radiohead or Tom Waits, they are going to be reductive and superficial. I guess my expectations here are too high. It wouldnt be the first time in life, haha! In the end, a review comes down to referencing other bands and coming up with a grade, which is ridiculous. There were some longer, thoughtful pieces this time though and I really appreciated them. I am grateful when writers immerse themselves in the world of the album and judge it as a stand-alone thing.

Lola Who: Did the audience react to it how you had expected they would?
Trevor: I try not to think about what our audience would likewe just do our thing. Im sure we alienate some supporters every time we put something out, but thats OK. I believe in change and longevity. The fact that The High Dials have never had a cut and dried sound has made things a lot harder for us over the years. We never quite fit nicely into any scene. But once you start trying to be what people say you should be, you will become crap quite quickly. I can remember two important conversations in our early days. One producer advised us to make music that sounded like The Strokes in order to get our foot in the door (after which he promised we would be allowed to experiment to our hearts content). Then there was Rod Argent, of The Zombies, telling us to ignore the fashion of the day and just follow our muse, cause at the end of the day all youre left with is the music. We went with Rods approach, to our ultimate reward or doom I suppose. I guess its too late now to sound like The Strokes and cash in! We will just have to keep pleasing ourselves

Lola Who: Any hints as to what the next genres of music you might incorporate into your music will be?
Trevor: I really try to avoid thinking of music in genres, and I mean that sincerely. Each song is its own world and gets the treatment it needs for its mood and message. Genres are a very uninspiring, even depressing concept. Best to think about textures and rhythms. I am really tripping on The Everly Brothers harmonies and dance music in various styles,  and I would have to be a robot not to be feeling Latin rhythms here. Well see what the other members of The High Dials (Robbie MacArthur, Max Hebert and Charles Pham-Dang) bring to the pot.

Lola Who: In the past youve worked with such luminaries as Sam Roberts, Rod Argent, and former Rolling Stones manager Andrew Loog Oldham. Any plans to collaborate with other well-known artists? Perhaps one of the several classic rock alumni who count themselves among your fans?
Trevor: Collaborations are amazing, they keep things interesting, and we are always looking to do that. But there are no plans at the moment. Last night I tried to collaborate with a drunken street musician with mixed results.

Lola Who: Have you started work on the next album yet, or are you still basking in the glory of “In the A.M. Wilds”?
Trevor: If there was glory I would bask in it til my skin was tanned and leathery! Alas, there is only the future, and the future of the band is always so tentative. I can never say for sure that there will be another album. They are hard to do and bands feel like something from a bygone age. As long as there are enough friends who want to make a record under The High Dials flag, it will carry on. We are all a bit scattered at the moment but for my part, I am very busy writing and recording in Colombia. Pretty sure I will be making albums til the day I die! And The High Dials has become a life project.

Lola Who: Having completed your Latin American tour, are there any other countries which youve yet to play that you plan to in the future?
Trevor: I really want to play in Eastern Europe. Hopefully, that will happen. Iran would also be cool, but I dont think that will be happening anytime soon. Thank you very much for your time.

Lola Who: Thanks to you man!