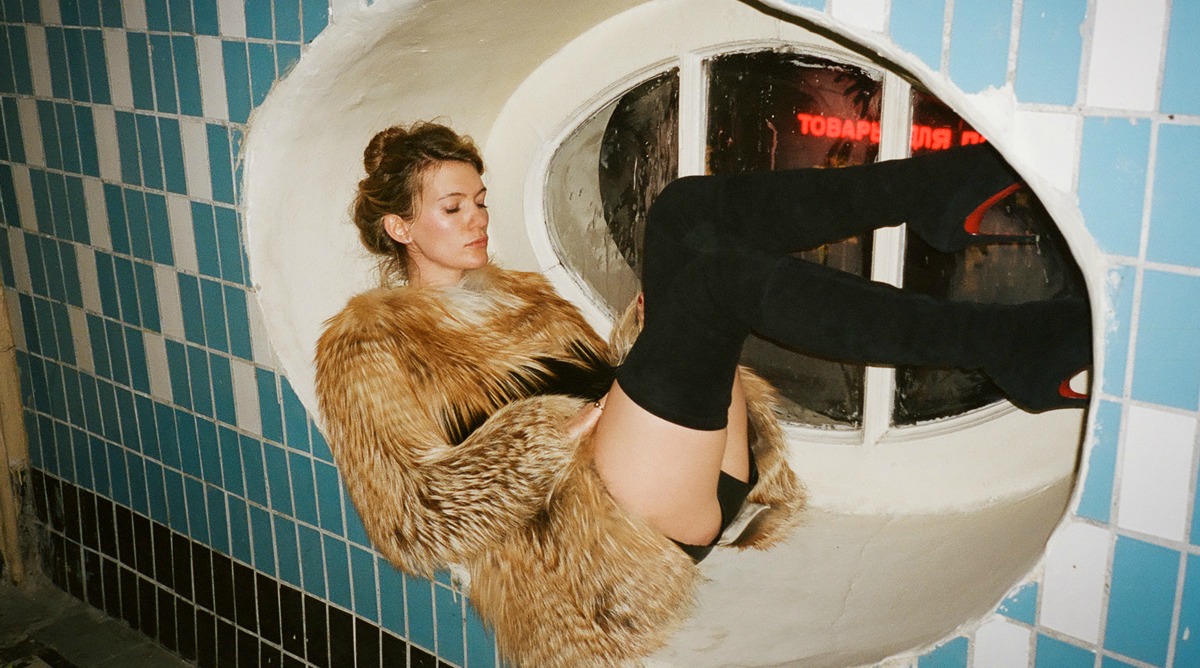 When we look at Nadia Bedzhanova photographs, we see modelesque women posing in what feels like a kitch inspired backdrops and dramatic plant pots. However, the backdrops of these photoshoots have not been altered or created by any form; they are untouched and unabolished, resonating with memories of Russia and the Soviet Union before the Cold War.

For this series of photos, Bedzhanova wanted to create a nostalgic display of high schoolers hiding away in stairways committing their first acts of rebellion escondito, and give the new generation of Russians a reminder of the promise to let go of the old and welcome the modern. Weve had the opportunity to ask Nadia what her inspirations and motives were behind these photographs. Lola Who:  Hi Nadia, can you tell us about yourself and the inspiration behind the “Girls in Stairwell” photoshoot?
Nadia: Im a filmmaker from Moscow, Russia. I’ve been living in NYC for the last five years, often traveling to Europe and always wandering around on the internet. The lives of young people in my homeland and around the world is a theme that Im extremely interested in. The international unification of youth culture is one of the main themes that Im trying to explore in my work. After moving to the US, and experiencing the American culture, I started to notice Moscows unique charm that I was taking for granted, and that I was used to be surrounded by. During one of my visits back home, I was amused by the stairwells in post-Soviet buildings. So during the New Year’s Eve holidays I was chilling in my friends apartment, feeling a bit bored, so I pointed her attention to the hallway in her building. It had so much character. It was just a perfect setup: a huge carpet, a Russian flag, a calendar with Putin and an enormous Christmas tree. Then I noticed that every hallway had its own charm with all these amazing elements: huge plants, Christmas trees, ridiculous decorations. I just needed to put a beautiful girl in there and get a pocket film camera, and the shoot was done. Together with the producer, Olya Korovkina, we picked our models and shot our series within three days.

Lola Who: What would you like people to see when they contemplate the stairwell series?
Nadia: This series is an ode to Moscow, and the beauty of its girls, who look amazing in these weird but homely surroundings. I simply wanted to show how unique and beautiful a mundane space like a stairwell can be.

Lola Who: Can you describe post-Soviet Russia and how it has affected art expression. What are reoccurring themes?
Nadia: The main themes that contemporary photographers, filmmakers and fashion designers like to explore and expose are related to contemporary youth, the lost generation, issues of depression and heavy intelligence. I also think the basic mood is changing again. At the beginning of XXI century, we were hoping and were looking at the bright side of the moon, we could travel and westernize our cities, a lot of new places appeared. Moscow became more or less European. But after a very unpleasant sequence of events, I feel like we lost our hopes again. Although we really do not want to show all our sadness and depression  we are still trying to find inner beauty in it, and it is so beautiful in its own way. We are still from here, and we appreciate it.  Russia can be tough and sad, but it makes us more resilient.

Lola Who: How is the new generation interacting and redefining the city Moscow today?
Nadia: The new generation of youth in Moscow is more universal. Everyone travels and speaks different languages. People with who I used to drink a while ago now have their businesses, bars, fashion brands, etc… However, the last year was very tough for Russian citizens and it became more difficult for people in Moscow to have a worldwide perspective on things. This is where all the self-irony, cynicism, deep sadness and lack of humor comes from.

Lola Who: Is the irony of contrast between chic and mundane an effect that intentionally reflects Russian youth post-Soviet era?
Nadia: Hmm, I never thought about its intentions, but I feel like its something we have unconsciously. Most of the people grow up in the suburbs and in mass housing projects, in two or three bedroom apartments in a building with an elevator that smells like pee most of the time. Dressing up in fur coats and Louboutins to go out on Friday night and catch a gypsy car devyatka with a suspicious driver to drop you off at the bar for five dollars; we’ve all experienced that. Being surrounded with high contrasts is one of our cultural characteristics. Lola Who: What is your most nostalgic and sentimental memory as a teenager?
Nadia: I think every person in Russian has interesting memories about hallways, especially high school memories; when we used to drink our first beers and smoke tons of cigarettes on the staircases of random Soviet buildings. I was not an exception. After I got this idea to do a photo shoot in the stairwell, I reevaluated these spaces… These walls saw so many things. If these walls were hackers, they would leak compromising information on every person in this country. Lola Who: There’s lots of fur and animal print going on in this photo series. Is this a nostalgic fashion statement or a current trend among the new generation of Moscow girls?
Nadia: Intentionally it was a nostalgic self-ironic theme, but unfortunately winter weather in Moscow dictates its fashion. It is cold, and it doesnt matter what generation you come fromyou will have a fur coat in your closet anyway. Lola Who: Can you explain the large plants that adorn these hallways and stairwells? Was that an intentional kitsch context?
Nadia: I guess its what old concierge ladies put in empty and sad hallways to make them look cozier and more attractive. I don’t think there is a right explanation to it, but you can find these plants in 90% of the buildings in Moscow. Lola Who: How is it to be a young woman in the post-Soviet era?
Nadia: I wouldnt say that its something very different from being a young woman anywhere else, but probably we have some distinctions. Anxiety, paranoia, depression can be our second name. We often experience aggressiveness and sexism in everyday life: on the roads while driving, in a deli while buying bread, in the subway during rush hours, etc. However, being born in the Soviet Union and observing how the country has changedmy Russian background has surely influenced me as a person and as an artist. I also believe that knowing both cultures (American and Russian) has given me a different perspective on things: cynicism and pessimism from my Russian side juxtaposed with comfort, hedonism and hopefulness from the American side. Lola Who: In which city are you living right now, and how would you describe the art scene?
Nadia: I live in New York City now, and the art scene here is the biggest scene you can possibly be engaged with. Everything happens all the time and you can find a lot of inspiration and different kinds of people. I would say that one of prevailing themes in the art scene here is being sexy, being open, being fun and careless, which is very far from the general mood in Russia. Lola Who: Finally, are you self-taught or did you attend an art school?
Nadia: I attended Lomonosov Moscow State University, department of journalism (photojournalism major) for my bachelor, and I also went to the School of Visual Arts in NYC for my masters degree in film directing. I love art schools. They push you to concentrate on your own work, but it will not help you to achieve anything if you rely just on that. You have to work on yourself and your vision and skills every day, figure out whats yours, what really turns you on and drives you, or at least to think about it… To think about people, place and the world that surrounds you.. and about all the little details, like stairwells, that are all around you.