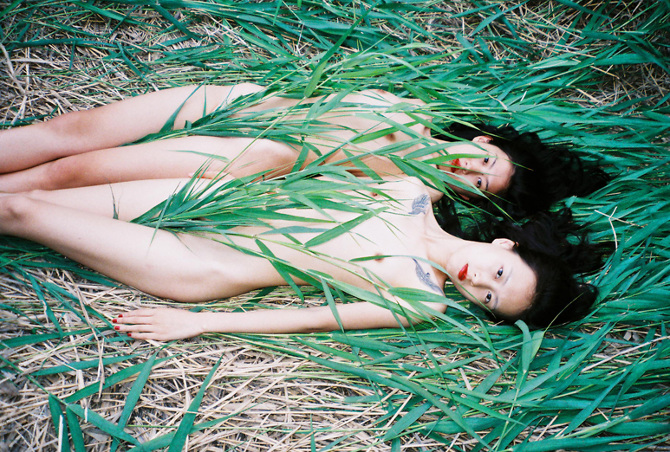 Naked bodies intertwined, boys and girls creating odd symmetries, humans in touch with nature and with each other; Ren Hangs photography has nothing to please the Chinese authorities. Born in 1987 in Chang Chun, in the northeast of China, Ren Hang has made a name for himself internationally and now represents a new symbol of Chinese youth; uninhibited and seeking freedom.

Ren Hang taught himself how to take photos with his silver Minolta that he bought for a handful of yen on Ebay. Making it as a photographer in China is not easy, especially when youre gay and passionate about eroticism. His work is deliberately provocative, raw, explicit and sometimes too controversial for his country.

Probably inspired by the masters of the genre in Japan, such as Nobuyoshi Araki, Ren Hang has created a dirty and provocative universe, proving that eroticism also exists in China, just like anywhere else in the world Though his photographs appear spontaneous, his work is carefully staged; Ren Hang knows exactly what he wants and will get his models to pose and twist their bodies in whichever way in order to achieve it. Despite their obscenity, his photos remain colourful and playful, and reflect Ren Hangs enthusiasm during the shootings.

Ren Hangs work has been banned in many galleries in China but has a growing list of international shows; in 2010, he received the Third Annual Terna Prize for Contemporary Art, he was invited by Ai Weiwei for the group exhibition “Fuck Off 2” at the Groninger Museum in the Netherlands, the Galerie Nicolas Hugo in Paris recently presented a solo exhibition, and he was ranked among the 25 photographers to watch by the British Journal of Photography.

The photographs chosen here are a bit toned down compared to some others on his personal website and Flick... You should check them out.