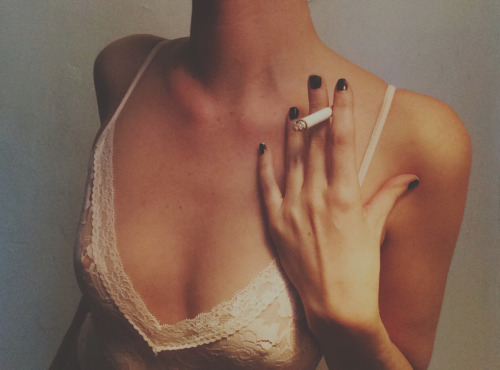 The photography of 25-year-old Kimber Beck takes the form of self-portraits with a retro feel. Her work might be better described as body portraits that explore intimacy with the body of the self, and with the bodies of other women.

Captured in whole or in part, female bodies are often found in surreal contexts and contortions. Intimate and dreamy, the subjects of her pieces are often faceless and unclothedor wearing only underwear.

In one image called Wonderland, a womans arms and legs dangle from a vintage mint-coloured tub that appears to be fixed on the peach-tiled ceiling. In another, part of her Bush series, a womans torso is captured with pale flowers bursting from her lacey underwear.

In a statement for Sticks and Stones Agency, Beck gave some insight into her beginnings as photographer and her preference for self-portraiture:

Ive been taking photos for about 2 years now and it all started out with self-portraits on my iPhone. Since then, Ive upgraded to a Nikon d7000 and take pictures of lots of pretty girls. But self-portraits remain my favorite. Theres something about being the photographer and model that works out really well for me. Im able to capture the exact emotion that I want without having to translate it into words to tell a model. All the poses come naturally, I feel them.

Playing with the boundaries of photographer and subject, then, through Becks work female bodies exposed and juxtaposed against everyday objects like flowers, bathwater, or mirrorsoften with a hint of something darker beneath the surface.