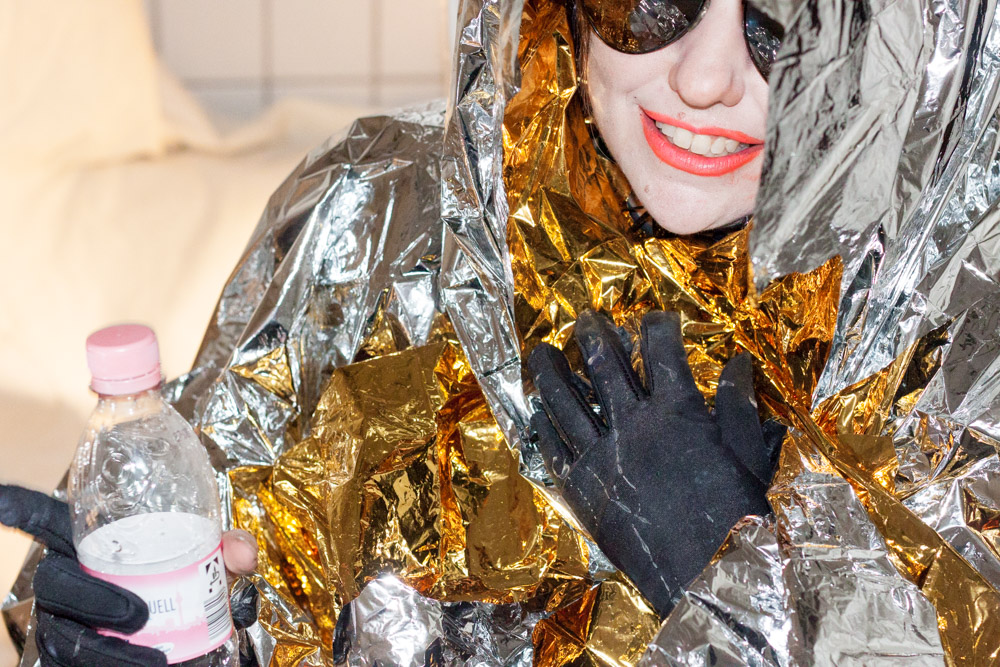 Geneva Jacuzzi is the kind of person who is always going around doing things her own way, which is often the opposite of what is usually expected. Shes gone astray from her religious upbringing in a Jehovahs Witness community and started a life of her own in L.A. When she discovered the avant-garde synth music of Kraftwerk and other similar bands, she thought that it was simple enough that she could play it herself. So she grabbed a keyboard and started her musical project called Geneva Jacuzzi. Rumour has it that she had a gig scheduled before she had even written songs! The rumour is right, Geneva confirms, and the reason for it is that to her it’s necessary to have a deadlineor shed be there working on the same thing forever.

On the day of her recent gig in Berlin, we were invited to West Germany (the venue) to experience the preparations before her show. There, a relatively small stage was getting wrapped in tinfoil like a silvery pink-lit cave-slash-womb.  The two dancers that were joining Geneva on stageshe usually gets locals involved and there is never a rehearsalgradually turned into silvery robotic creatures who seemed to have come to Earth specifically to be a part of her show. When asked whether she would be free to do the interview at some point, she cheerfully replied that she never is. 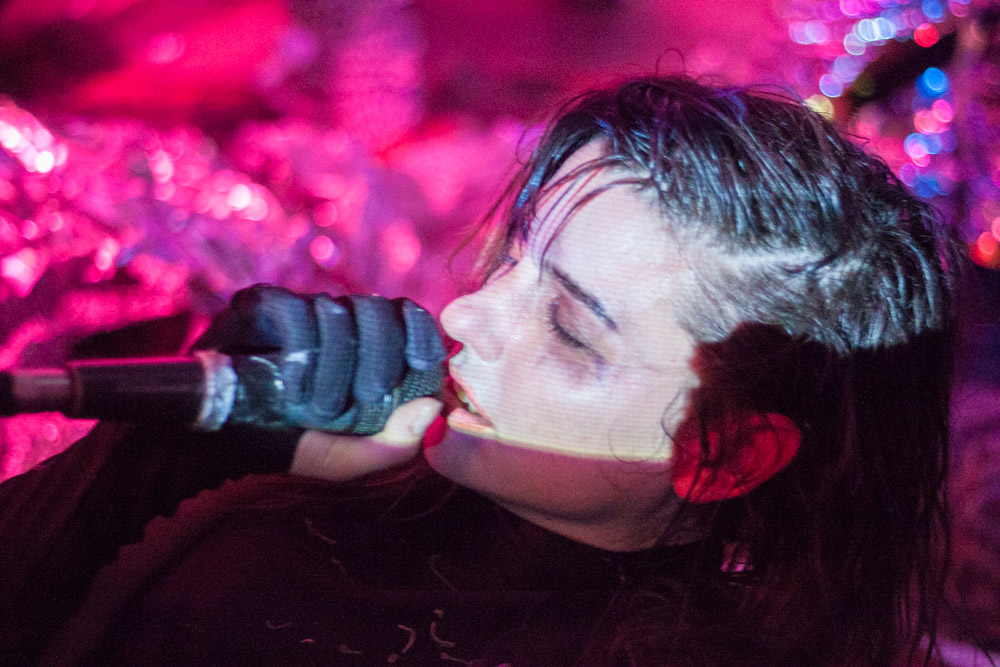 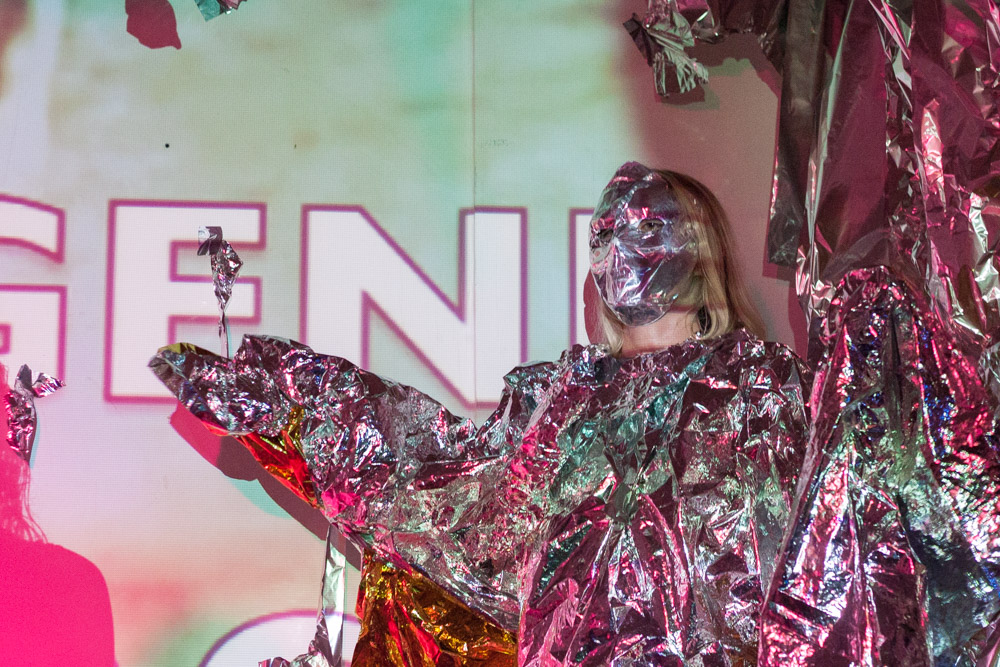 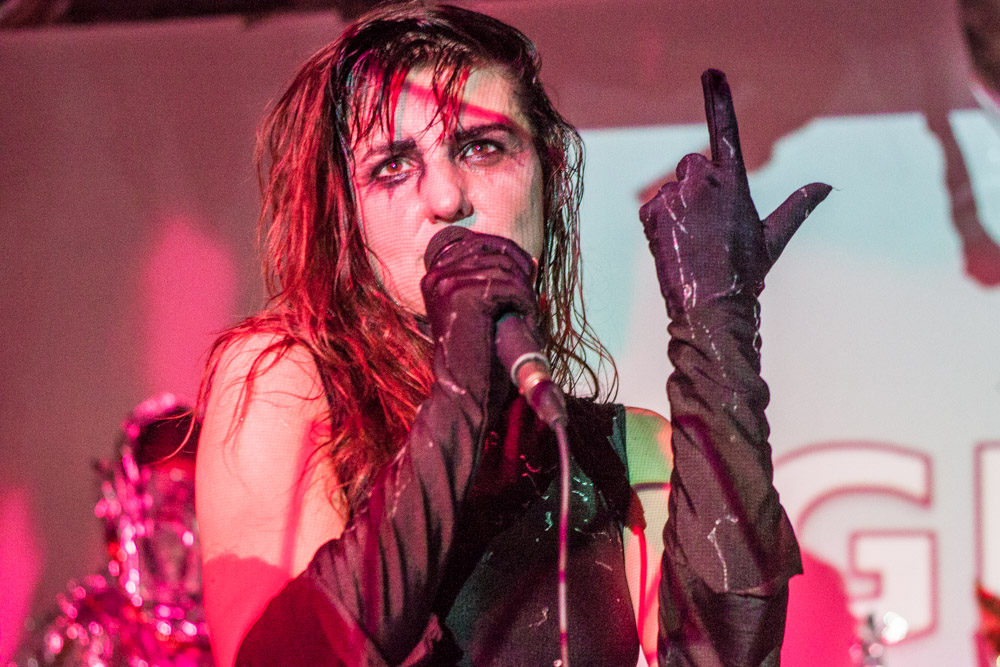 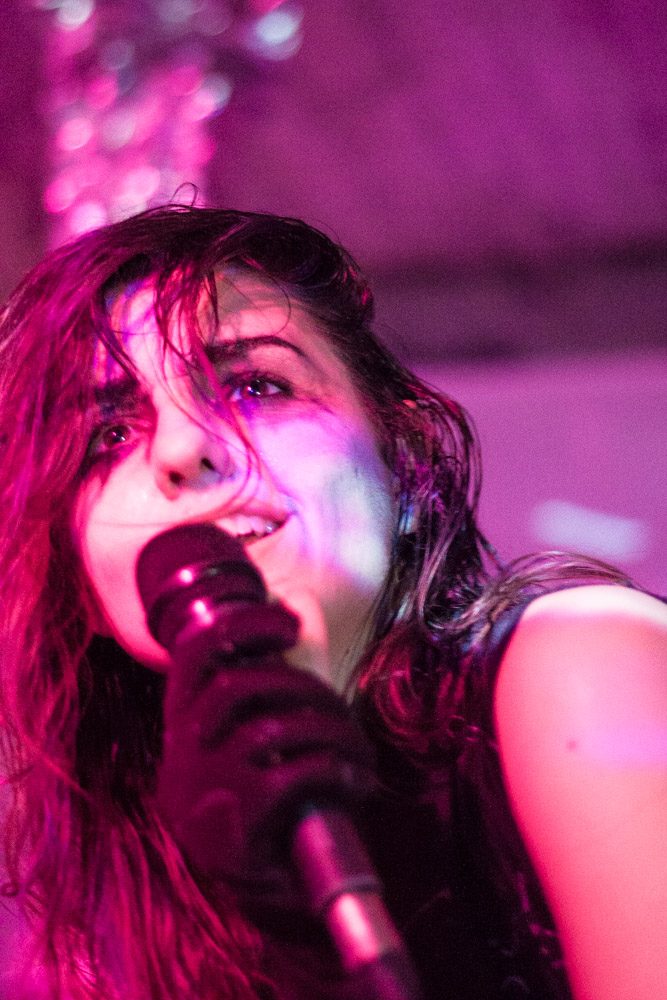 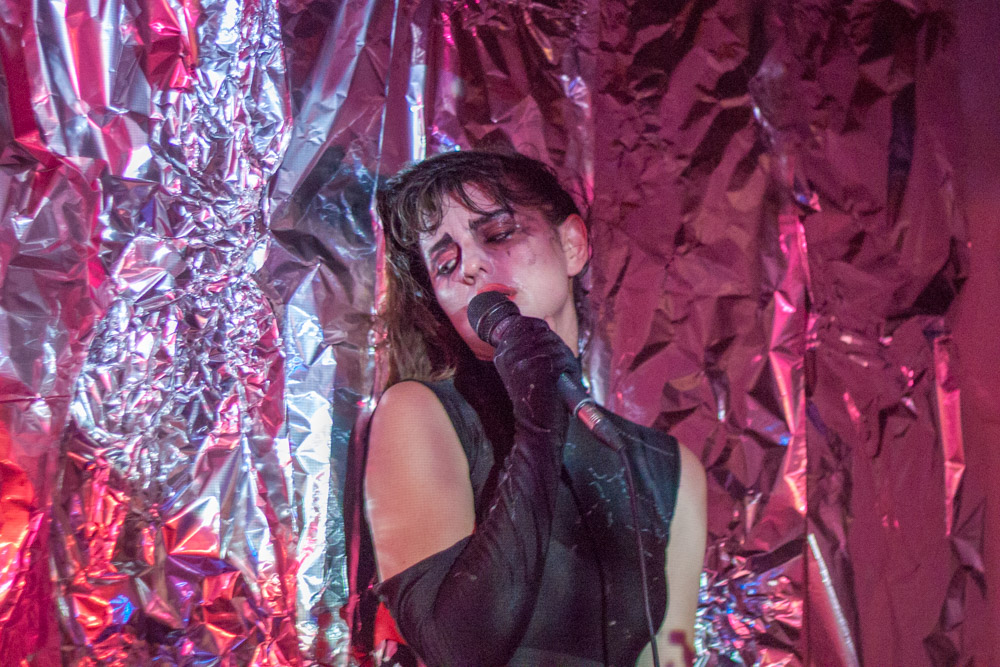 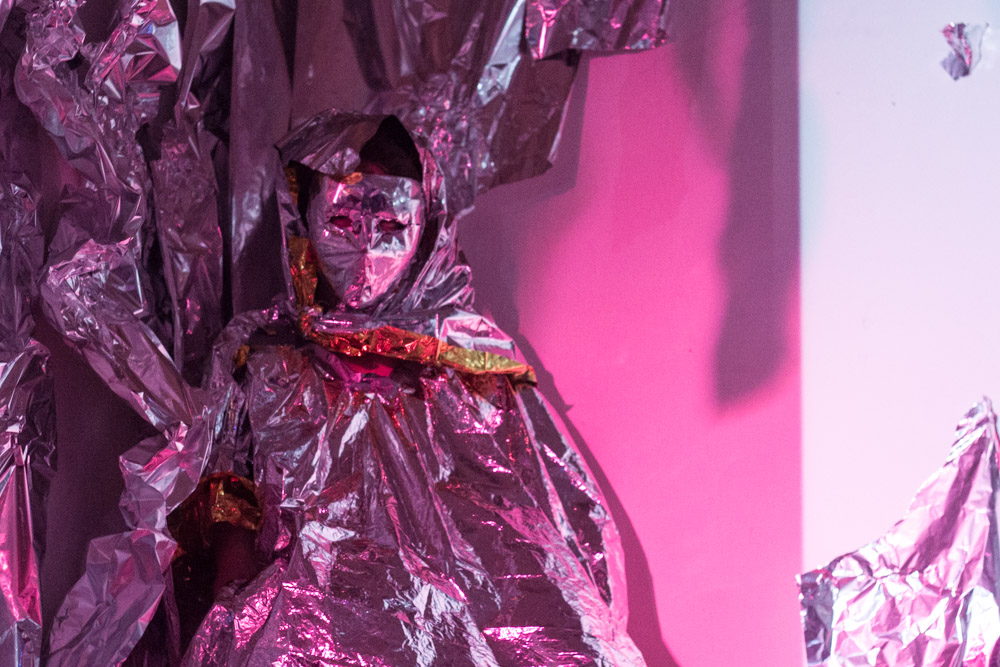 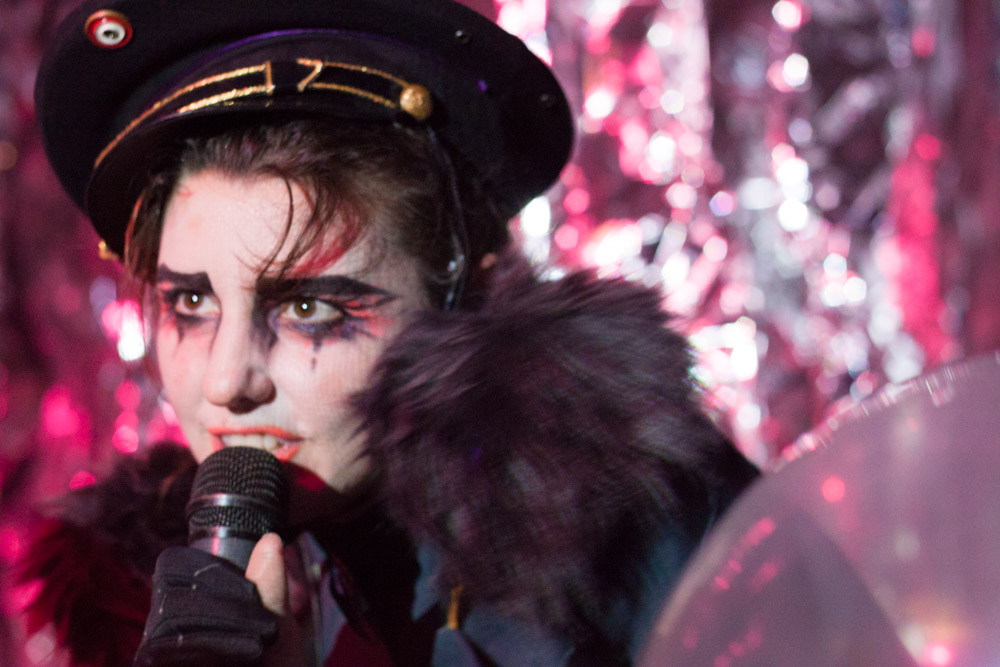 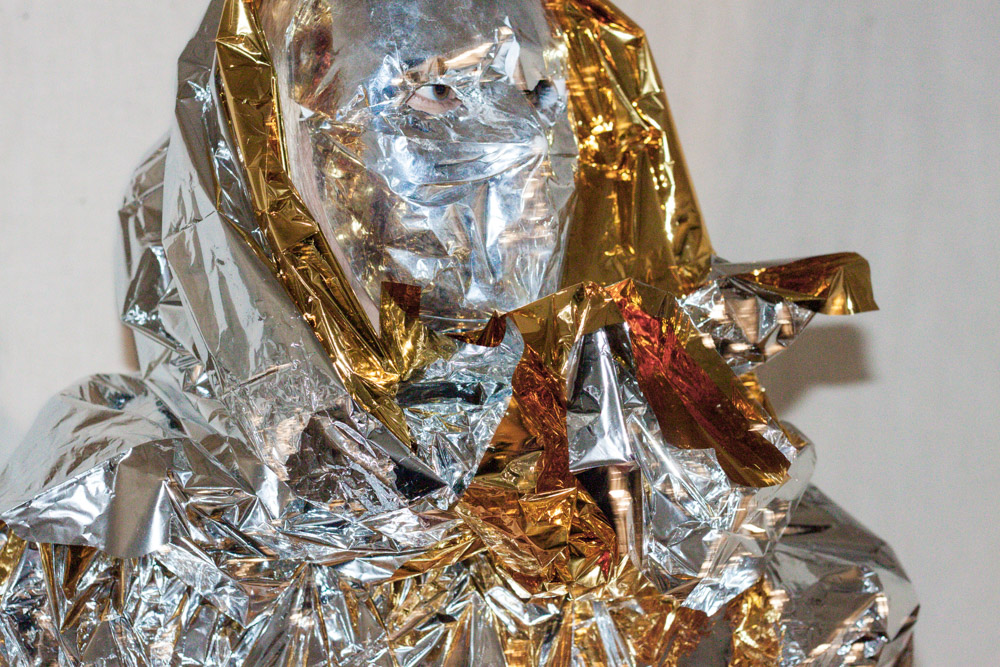 Geneva herself was sporting her art cop look: a tight black leotard paired with a uniform-like jacket and a cap topped with sunglasses for an additional touch of coolness. When it was time to perform, she wrapped herself in silver foil, just like her dancers, and the three of them collectively marched towards the stage making robotic dance moves.

Needless to say, the show was a blast. It felt as if we travelled back in time to one of those long-gone West-Berlin venues, where art-driven music performances used to take place almost every night throughout the eighties.

The interview didnt take place until after her performance, after seeing how much energy and enthusiasm goes into a Geneva Jacuzzi show. When she finally had a free moment, we resorted to the corridor and talked about performing on stage and her most recent album Technophelia.

Lola Who: Music, art and performance are three vital elements in your work. If I was to describe what you do, I’d say you are a music making performance artist. Would you agree?
Geneva Jacuzzi: That’s an interesting point because when I think of the live showIm a solo artist, that’s the real thing. A solo artist can’t play all of the instruments onstage, so what they do is either have most parts prerecorded and maybe play one of them live, or else they have a band that they teach the different parts to. I feel like it’s truer, for the music that I make, when I am present and interact with the audience instead of being stuck behind a keyboard. And even if I played the keyboard live, I would still need to have pre-recorded music, so I thought, “Fuck it, get rid of the keyboard and just perform.” Because for me it’s all about connecting with the people.

Lola Who: You make use of costumes and makeup, do your own stage design and have people performing with you onstage. The audience in Berlin got really excited and engaged. Is that normally the case?
Geneva Jacuzzi: It’s funny because usually people in Berlin don’t respond! I mean, in the past they kind of just stood there and watched. When you do a show like I do, with costumes and performers and all that, I think it brings out that in a way, everyone is the same inside. Social environments can change people’s personalities to a point. But ultimately everyone comes to the show because they want to enjoy themselves. So when I throw props out, I think it breaks a little bit of the barrier between the stage and the audience. The goal is to have people feeling comfortable and enjoying themselves, enjoying the show and participating if they want toor not if they dont. I find that when you break that wall, everyone wants to have fun, no matter if they are in Berlin or in L.A.

Lola Who: Your shows are not choreographed and rehearsedthey are improvised and often feature people that you met on the day of the show. How do you make it work every night of the tour?
Geneva Jacuzzi: Over the years, I’ve learned how to walk into a space and sort of survey the people and the environment and see whats possible considering how much money and how much time I have. It’s always different because when I see a space I get a different idea. Also, I meet people who want to participate and often get ideas from them. It’s actually a collaboration and that’s why it cannot be the same way twice. Someone will be talking and I’ll be like, ”Oh yeah, lets do a giant snowball on top of the…” because what they said reminded me of something. I feel like it’s good to have the environment pulled in spontaneously. When you do the same show every night it gets boring maybe not for the audience, but for me.  I go on tour because I want to enjoy myself, too.

Lola Who: I suppose that’s the reason why you have random people perform with you onstage
Geneva Jacuzzi: Last night I had two guys performing with me. I met them twenty minutes before the show and it was great! If you want to do a show on tour with costumes and props you either have to have a huge production company and money, or you just have to be adventurous and get to know people. I’m always surprised at how people react when I present an idea. People who you wouldn’t expect to be into that kind of stuff actually want to take part. And you find out that so many people are so talented. Maybe they work as an accountant during the day, but then at night they are there with me, painting a wall and making a beautiful stage just because I begged them to. And I just go: It’s amazing! Sometimes it feels like I’m a cheerleader for all these people who help out. Other times, I have to do it myself and that’s fine. And sometimes I dont do anything, I just stand onstage and singit doesn’t always work out. But those shows can be good in their own way. Each space calls for what it wants.

Lola Who: Can you compare the performative part and being on tour to the process of making a record? That must be quite different.
Geneva Jacuzzi: I feel like the performances sort of express the part of me that comes out when I’m recording. When you make music you dont know where the melody comes from. It comes from an unknown place. Similarly, when I do a performance, theres an element of not knowing whats going to happen. Of course, I insert my ideas into it and all these things are very symbolic. It might seem random but each element of the stage is something that is meaningful to me. It’s a symbol for something, but that’s just for me and people dont ever know that. Performing and recording are different forms of expression of almost the same thingthe part of me that needs to express itself so that later I can understand it.

Lola Who: When you first started out, you apparently had a gig scheduled before you had any music. How did that show turned out?
Geneva Jacuzzi: I like to create this opportunity and give a deadline to myself. I think it’s very important. Being around all these artists and musicians, it frustrates me when a person who is so creative works on something for too long and then they never finish it. I learned that nothing is ever perfect, I can always have more time and I could try making it perfect but then I would never finish it. And then, when I come back to it later I think: actually, it was perfect. I wouldn’t have thought that at the time, I would’ve kept going, but I’m glad that something stopped me that wasn’t me. I need to have a deadline. When you work with other people, they tell you: It’s okay, it’s good enough, lets do it. But if youre a solo artist, your own mind will spin and spinyou need to have a barrier. A lot of times Im disappointed at first, and it takes me a while to realize that it was just right. So I reverse it and go like, heres the opportunity to do something in the given time frame.

it frustrates me when a person who is so creative works on something for too long and then they never finish it.  -Geneva Jacuzzi

Lola Who: And that was also the case with the new record, “Technophelia”?
Geneva Jacuzzi: Yeah, I had to finish it, because I had to go to rehab. I had to go to rehab because I was fucked upand now I’m not, I’m sober. But I’m still doing all the stuff I did when I was drinking and doing drugs. I was doing the same thing, now I’m doing it a little bit better and I have more fun. I actually really enjoy it now.