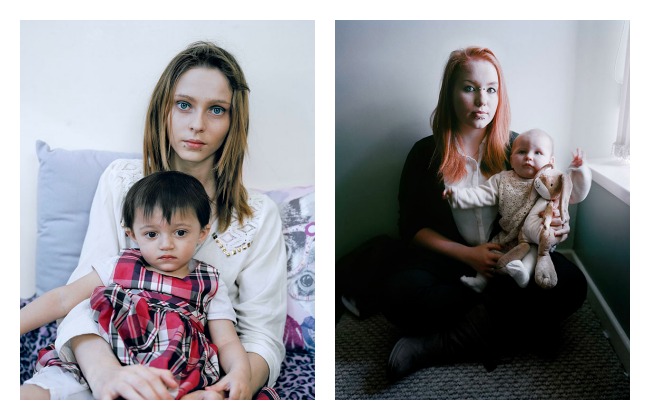 In light of Mother’s Day, Lola Who sheds light on an often misunderstood level of parenthood: teen moms. Marta Giaccone took an inside look at the world of young mothers in Wales in her project ”Be Still, My Heart.” In this interview, she shares some of the stories and things she discovered in conversing with these strong and dedicated girls. Lola Who: What inspired this project?
Marta: When I was doing an MA in Documentary Photography in South Wales, back in 2013-2014, I was constantly on the lookout for interesting ideas for photo projects. I didnt find anything interesting for the first six months of my program or so, due to the damp and grey skies, which I found overwhelming and stifling. When spring came, I started seeing more things. What caught my attention was the number of young girls pushing prams in Newport and Cardiff, and in shopping malls. I tried to imagine what it would be like to raise a child at such a young age and decided to approach them and let them tell their stories. Lola Who: How easy or difficult was it to find teenage mothers to participate?
Marta: It was difficult. I dont blame them though – after all I was just a stranger asking them if I could meet them at their house to take portraits of them with their children. About 40 per cent said no in the beginning.  Another 40 per cent said yes, gave me their contact info and then completely disappeared. At first, I was disappointed and offended, but I didnt realize that they constantly deal with prejudices, so they were on the defensive. The remaining 20 per cent were amazing, and I am so grateful to the 25 girls that eventually let me into their homes. Lola Who: In your eyes, what is the biggest challenge for teen mothers?
Marta: The biggest challenge is being a teenager and a mother at once, as well as juggling work and school. Most of them live on their own, so that involves sorting out all house-related things (electricity, gas, etc). Then buying and making food for themselves and the children, taking them to the doctor, and on top of that, some go to college or university and work one or two jobs. They are very responsible now. Many girls told me they have lost most of their friends, too. Here’s what they told me during the interviews I conducted. ”I do enjoy being a mother, its just tiring.? I dont see many of my old friends, I just dont get invited out much anymore… Its easier to hang out with other mums. ?I work part time on Saturdays, and Im looking to go back into full-time work. I would like to go to college and study Health and Social Care.” ”My mother was mad so I left and moved ?to another city, on my own. She didnt force me to leave but I thought I should sort myself out and deal with the consequences. Now I go to university. I want to become a lawyer, and I’m work?ing in the evenings. My daughter goes to nursery and then her dad? takes her home. ?But I would never have another child.? I think about her future, thats why I work hard every single day, so one is enough for me.” Lola Who: Was the boyfriend supportive?
Marta: About half of them lost their boyfriends, who turned out to be way less mature than them. So now they need to take care of everything themselves.  To me, its incredible how strong and proud this has made them. “Wed been in a long relationship,? he said we should keep the baby and then all of a sudden, ?he just messaged me saying; ‘I dont wanna be with you anymore,’ which broke my heart because Id kept her and I was going through a rough time. I really needed someone? and he just…  Its just life.” ”My boyfriend and I had been together for two years and he had always wanted a baby with me. He acted like, ‘Oh, this is brilliant,’ but he didnt stop taking drugs, and I was gonna protect my child no matter what my feelings were.? So even though it was hard I had to break up with him.? Im a lot happier now, it shows you dont need a man to be ?a mother.” Lola Who: What type of relationships did the teen mothers have with their parents?
Marta: They have their parents full support. One thing worth mentioning is that most of these girls mothers had been teen moms themselves, so it was understandably quite easy for them to accept their daughters premature pregnancies. It was generally harder on the girls fathers to take it, but eventually they did, and now they are proud grandpas. Lola Who: What kinds of support systems and resources did these teen moms have? Did they seem to have enough?
Marta: It seemed to me that money-wise they were doing fine, they had all they needed. I am not an expert on the Welsh laws but I do know that they give free or low priced housing to unemployed people and young parents, as well as weekly Child Benefits that will go towards the kids general health and clothing. Lola Who: How was the audience response towards this project?
Marta: All my friends, family and MA professors liked it. I get messages from strangers from time to time, as well as media requests, telling me Ive done something special. The one thing a few people, always non-photographers, have asked me is the reason behind the serious and straight looks. Although all these girls couldnt stop smiling and cuddling their children, I cant help but connect smiley pictures to holiday snapshots. I wanted to make portraits that gave my subjects all the respect and dignity that society seems to take from them. I felt that a more classical and formal pose would help that. They reminded me of little Madonnas holding their Infant Child. I wanted to give them grace. Lola Who: Was there any teen mom story in particular that was inspiring/interesting that you could share?
Marta: One girl told me she got pregnant when she was 17 and had been dating her boyfriend for less than a year. They had spoken about starting a family but were planning on waiting a couple of years. So they decided to get an abortion. Two weeks after this, he died in a motorbike accident in broad daylight, so she kept the baby. She says that her baby is the spitting image of his father, and that he has been her saving grace. Lola Who: If you could offer a word of advice to teen moms-to-be, what would it be?
Marta: I dont think I am the right person to ask, because I am neither a teen nor a mother. But from all the life stories I have heard, no matter how bad, unfortunate or boring you think your life is, if you get pregnant and decide to keep your child, it will change you in ways you cant imagine. If youve never thought of becoming a mother, once you become one, it will suddenly be all you want.

Lola Who: And, if you could offer a word to the general public to help them understand the struggles and lifestyle of teen mothers, what would you say?
Marta: Its easy to judge, but first one needs to know and understand the circumstances. Its hard to become a parent, as well as keeping a stable relationship at any age. Becoming a mother is an act of strength, selflessness and courage. In the best of case, it should bring happiness and completeness. And what is our purpose if not the pursuit of happiness and meaning. “Motherhood is very rewarding, its a great experience, I dont regret it for the world, she is my world, she changed my life in a good way. It is slowing me down but I can still see me doing things I want to do in life, its not gonna stop me. Ive got so many people who are supportive around me, my good friends are closer, ever since I had the baby they want to see her so I get to see them more, it just shows who your true friends are.”