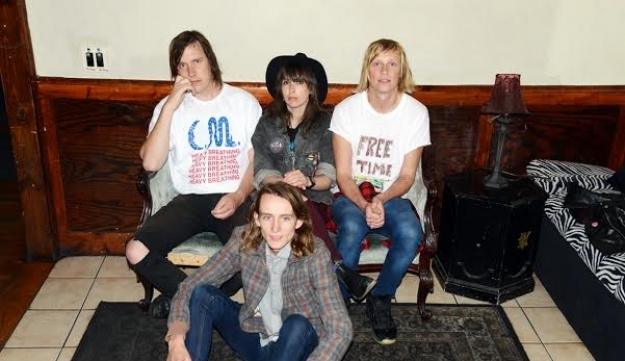 Craig Dermody, from Melbourne’s Scott & Charlene’s Wedding, writes funny and grunge-inspired rock songs about the trials and tribulations of everyday life. After spending three years in New York, the charismatic singer-songwriter is back with his original bandmates; Gill Tucker, Jack Farley and Joe Alexander, with whom he recorded nine new irresistible slacker rock tracks. Scrambled-eggs, delivery trucks, and watching football on Saturday; listening to SACW’s latest album “Mid-Thirties Single Scene” released through label Fire Records, proves to be an engaging and rather relatable experience. We chatted Craig while on tour in Berlin about the ups and downs of life, the Mona Lisa and where to eat the best Pho soup.

Lola Who: The title of your latest album is “Mid Thirties Single Scene.” Can you tell us a bit more about what state of mind you were in when you were writing that album… Were you going through a midlife crisis?
Craig: I think I did have like a little bit of a crisis, but it was after I wrote those songs. I guess it’s a long story. There was a moment where you wonder if youd made the right decision to follow the things that you followed. But that only lasted for a little while, I guess. So yeah, the name of the record doesnt really relate to that. It was just a funny term that a friend of mine created and I thought it was dark and kind of funny. Which is sort of how our music is.

Lola Who:  How much of those lyrics are related to your personal life?
Craig: Everything in those lyrics, it’s all true. It’s how I do my therapy. Thats why theres a lot of like Ah Im having trouble with this or I dont know how to work this out there all that kind of stuff and then writing songs helps me to work that stuff out. So yeah, I guess I’m not always in the situation that I want to be.

Lola Who: And in what state of mind are you now?
Craig: We’re riding high at the moment. Touring has heaps of highs and lows as well. I was feeling a bit sick, and now I’ve gotten better, and weve been having good shows and we’re all in a good mood with each other. So yeah, right now is really good. And I just did a review in my Pho blog where I review Phosthe Vietnamese soupthroughout the world. Ive done a lot of reviews in Melbourne, but I did one just down the road.

Lola Who: Im curious now, where is the best Pho soup in the world, cause I also love Pho!
Craig: I could tell you the best Pho in Melbourne. Theres a place called “Pho Chu The” (name unclear), which is like the most inspiring thing ever. I wrote an explosive review about it. Lola Who: Yes, I totally want to read that Pho review! So youve been travelling a lot, touring and doing Pho reviews… You were also living in New York for a while…

Craig: Yes, I was in New York for three years. People ask me a lot about why I moved to New York, and theres a lot of reasons. It was the end of a chapter for me, the end of making the first record (Para Vista Social Club). I also lived in New York for a couple of months when I was younger, like 20 years old, and I wanted to get back there. And it’s just one of those places that, if you wanna grab big opportunities or if you have ambition and all that kind of stuff, you can make it happen. We made a record, and after three years, my dad became sick, so I had to return to Adelaide. If that didnt happen, Id probably still be living there.

Lola Who:  And do your sound was different when you were living in New York?
Craig: Totally, yeah, well it changes because every record has three different people, so it’s a different lineup for every record. So the second album “Any Port in a Storm” is the New York band. And now Jill, and Jack, and Jo, are on this record (Mid Thirties Single Scene), and it sounds different because of that.

Lola Who: How do you adapt and change the way that you write your music when you work with different people all the time?
Craig: I just write the songs, and then I just say to whoever is there ‘you do what you want to do with it.’ So my writing process doesnt change, no matter who’s in the band. But it’s not the funniest thing in the world. It’s sometimes stressful, but they were obligated to do it. Jill and Jack, they were my best friends for ten years in Melbourne. Jack recorded the first record. Jill gave me my first ever guitar and helped me to learn how to play. So when I moved back to Melbourne and asked them to be in the band again, they had to!

Lola Who:  So this album is like going back to where it all started?
Craig: Yeah, it’s sort of like a full circle thing. All three of them have been a part of Scott and Charlenes Wedding for the whole time. So to me, it feels like it’s sort of the end, like the end of changing. It’s always been my band, and I’ve played with different people, but now it feels like this is THE band.

Lola Who:  So the next album will probably be with the same lineup…
Craig: I would say almost certainly, if they want to!

Lola Who: I was told that you also enjoy painting, so maybe you can tell me more about each album cover and their meaning.
Craig: Yeah, the first one (Para Vista Social Club) is interesting cause when the band first started, nobody was interested in itlike about five people came to our shows for the first yearbut my paintings were going really well, and I was getting people to exhibitions and making money from that. So when I did this, I saved up my money and then pressed the record and painted on every cover. So this one has 200 different covers. It took a long time, and that image was the one that I ended up loving, thats the “mad horn.” Lola Who: And what about your other two albums?
Craig: I dont know, I can’t remember what’s the story with the second album cover… It was just a painting. And then for our last album, I got really obsessed with Leonardo da Vinci and the Mona Lisa, but it’s actually Jill. I mean, Im not technically good at painting, so I just paint over a painting. I thought I’ll practice somewhere and I’ll learn how to paint, and I’ll recreate all the Leonardo da Vinci paintings. I painted the Mona Lisa a lot of times. So I got Jill to pose, and I took a photo of her and then I spent months and months and months trying to do this one painting of Jill and the eyes just never turned out right. Lola Who: So what’s next for Scot and Charlene’s Weddingthat’s an unusual name by the way….
Craig: Yeah, I mean ten years after I chose that name, I hate it. I dont hate it but it’s too long, and it’s hard to explain and Id rather it just be a really short simple name cause it’s hard to put on a poster. But I guess you could call anything anything. Like I could call my band Ashtray, and then after the band plays a few shows and releases a record you wouldn’t think of an ashtray when you’d think of that band, you’d think of their music, so names dont really matter in a way… But yeah, theres always new pieces. I have two new songs, but what will happen is we go to Japan for one month, and then we go back to Melbourne and we do one more show, and then I wanna calm down and just sort of wait until next year.  So on December 18, it’s our official Melbourne launch, and that for me is the end of this story… And then, it’ll be the start of a new story.