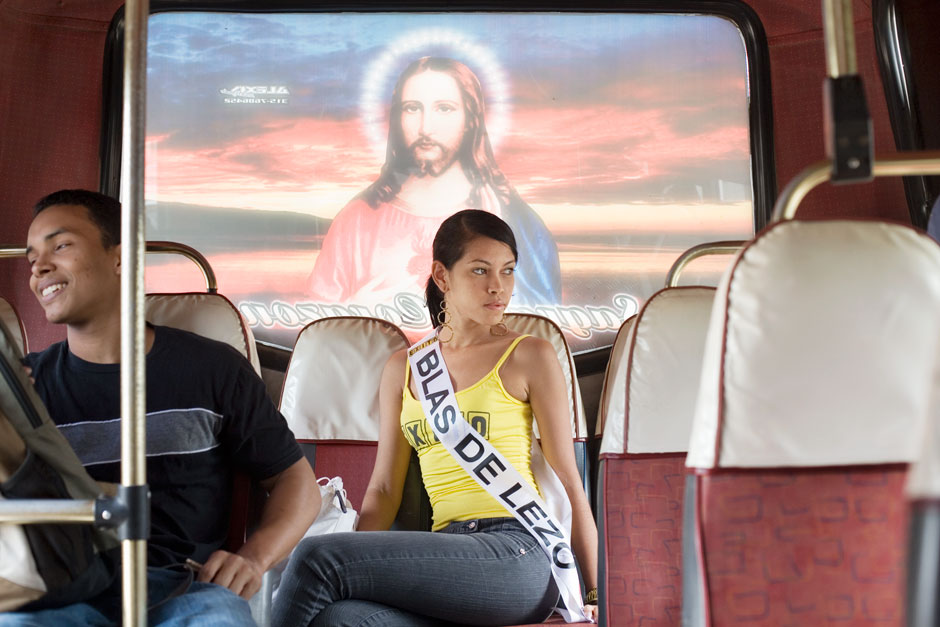 For better or worse, beauty contests instill passion in Colombia. Jennifer Osborne, a Canadian photographer, decided to go to Cartagena in 2009 after leaving her job at Fabrica, a communication agency in Italy. Her trip to Cartagena was specifically planned around photographing pageants, and staying with a Colombian family to get an insiders look into the renowned Colombian pageant world. She took the time to share her thoughts on the worrisome psychological effects of beauty pageants, the Colombian beauty ideal, and how beauty pageants can (surprisingly) empower young women.

Lola Who: Based on your portfolio, it looks like youve been traveling quite a bit. Can you tell us more about your trip to Cartagena, Colombia?

Jennifer: I was in my early twenties and, I guess, ready for a bit more excitement. At that time, I was really interested in going to wild places, with good stories to tell. The reinado project gave me a reason to go there. I had always wanted to go to Colombia after reading so much about the cocaine trade. I found it exotic, intense and somehow insane that such horrible trafficking related incidents could happen there, in such a sunny and friendly country. I was intrigued, so as soon as I found this story, I went.

Lola Who: How did you come up with the idea of documenting the beauty pageant?

Jennifer: I worked for Vanity Fair Italy before shooting this project about these girls’ quests to become “beauty queens”, and was in contact with one of their writers, who mentioned she had been researching the independent beauty pageants that featured contestants from some of Cartagenas  poorest areas. We pitched it to Vanity Fair, but in the end I just went on my own out of interest, when the magazine said they weren’t interested. It’s vital to just go out and be active as a photographer, even if the jobs aren’t really there.

Lola Who: How were the contestants when you first met them?

Jennifer: The girls seemed very on edge and quite tired. They looked way older, beyond their years and were spending many hours a day preparing and practising for their respective beauty “tournaments” as I call them. Each day was like a battle. I saw some comradery between them, but there was a lot of envy too. The green-eyed monster definitely popped its ugly head towards the end when the finalists and ultimately the winner were announced.

Lola Who: How old were the contestants and what was their main occupation?

Jennifer: These girls seemed to all be in their late teens and early twenties. As far as I know, most of them didn’t have jobs other than somehow being employed by the pageants. They got money and sponsorships to continue. For months, they were busy for about 8 hours a day preparing, exercising and performing. I did meet one girl though, who was in her mid-twenties, and who worked at a hotel for some time. I stayed with one girl’s family and paid them rent for their second bedroom that served as a kind of income for them.

Lola Who: What was the ideal of beauty of the contestants?

Jennifer: Judges declared that the winner should embody the spirit of a traditional Colombian woman. I came to realize that meant one should be able to sing, dance, wear clothing well, look good and have a supernatural type of charisma. The people there are very vibrant and not afraid to be noticed. The winner from 2009 had definitely all of these things and seemed quite humble. She didn’t stand out amongst the others at first, because she was so relaxed and quiet, yet confident. She wasn’t constantly proving herself to the others, which was maybe what made her attractive to the judges in the end. She just had some kind confidence that surpassed what the other girls were trying to project. Sometimes being around the other contestants was like being in a pack of dogs fighting for their owners’ attention.

Lola Who: What lengths do beauty contestants go to in Cartagena?

Jennifer: There were a lot of teeth cleaning sessions and fat burning cosmetic appointments, where the girls got strapped up to machines, lay there and let the fat drop off their bodies. I can’t verify any of the stereotypes about plastic surgery, but I’m sure it happens in some cases.

Lola Who: Beauty pageants hold a special place in Latin America, but they are often criticized for ranking women like prize horses. What was the general perception of the public and the media in Cartagena?

Jennifer: When I first went there to shoot this project, I had a lot of stereotypes in my mind about South American men. I was thinking “they must be pigs” because they feed into these brutal competitions that seem quite barbaric and primitive, or, animal. Crowning the best looking women is kind of threatening to our integrity as females. But after I walked the streets of Cartagena for a few weeks, I realized that the respect of men for women is quite high. Men were calling me “Reina” (Queen) on the street! I was shocked! Never have strangers, let alone men, yelled at me to say I’m a queen! I felt somehow honoured by thisI never experienced any physical harassment, so I took it as a sign that public opinion was quite positive towards the contestants. There was a deep admiration for the beauty and charm the women displayed, and I came to understand that for Colombia, beauty is a natural resource.

Lola Who: What dreams did the contestants have?

Jennifer: The girls I followed came from very poor backgrounds. Some lived in ghetto-type neighbourhoods where drug trafficking was rampant. Others shared their bedrooms with three or four family members. So I would say their end goal was to get publicity to have a better chance at a career in TV, radio, or, at least find a rich husband who wanted a good looking wife. These girls were somehow using their beauty to generate income. Many of the pageants were sponsored, and they received free clothes or products to take part. Coming from their income bracket, these are things the average participant could never afford.

Lola Who: What were the prizes for the winners?

Jennifer: There was only one winner at the final pageant, and her prize was to act as a spokesperson in Cartagena for the next year. She would be the face of many events and would have the chance to feel glamorous for a year, with frequent TV and radio appearances. Other than that, the pageants leading up to the final round all had different prizes. I believe some had money or sponsorships from fashion companies.

Lola Who: When the pageant was over, what was the general mood of the contestants?

Jennifer: I saw a lot of girls in tears after losing the final pageant. One girl was just sobbing on a chair, in her coach’s arms. It made me feel sad to see how high the stakes were for them, both personally and financially. It seemed like they had sold themselves out, running around on stage in bikinis, with not much pay off. I really felt for them. All the failures one could ever expect in a whole lifetime were compressed into a single moment. Some of these girls had prepared for the pageant for their entire life, and losing meant they would have to start on a new path…

Lola Who: Was there any specific requirement to enter the pageant?

Jennifer: I don’t really know but having a good body – one that is suitable to be flaunted in a bathing suit – was a definite must. All of the girls were very fit. It would have been cool to see chubby girls in there.

Lola Who: How has your perception of beauty pageants evolved after documenting this event?

Jennifer: I went down to Colombia thinking that it would be a horrible and barbaric experience to see the women prancing around like pieces of prime rib. It could have easily left a bad taste in my mouth… But when I left, I had the feeling that somehow it empowers them to take such pride in their appearance and attitudes. I found it uplifting. It was a bit of light shed on a dark situation. The pageants offered the girls something to aspire to, and something to live for. Even if I don’t agree with the end goal of being a beauty queen, I can support that they want to achieve something and to be recognized. It keeps them out of drinking and drugs and illegal behaviour, so it’s positive.