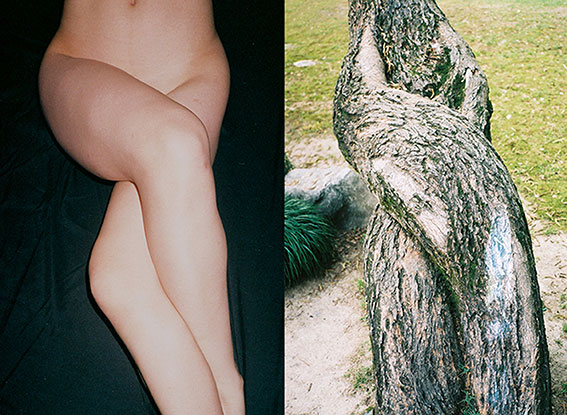 Spirituality. Nakedness. Environment. Life. When one contemplates the exposed human body in relation to nature, its easy to forget about the ego. In Eastern philosophy, humans are attached to nature. Here, Chinese photographer Chen Chong has combined the two in his series “About Eternity,” creating a seamless vision of natures relationship with the human body. Regardless of modern sciences ever tightening grip on the 21st century, the two remain closely intertwined.

Lola Who: What is it about the human body that interests you so?
Chen: During the period when I was suffering from depression, I concentrated my energy on the relationship between the spirit and the body. I became interested in human bodies.

Lola Who: What inspired you to pursue About Eternity?
Choen: In the Eastern philosophy, humans are attached to nature. I am also affected by Eastern Buddhism thinking. This is what I pursue.

Lola Who: How did you approach the creative process with About Eternity?
Chen: I put human bodies and nature together as diptychs since they are similar but contrasting. I just randomly picked the body and the still life.

Lola Who: The paired photos appear seamless. Was it difficult or time-consuming finding matching subjects for the project?
Chen: I spent over a year to finish this body of work. It really takes a lot of time, and I have to pay attention to it.

Lola Who: Do you believe there are links that bind the human body to the natural world?
Chen: I think humans are just a part of nature, and humans always try to have control of nature. Modern science and technology has developed incredibly fast.

Lola Who: Does the human subjects nakedness suggest vulnerability?
Chen: Yes. It definitely has vulnerability.

Lola Who: Trends in desired body type have been affluent throughout history. Do you feel nature unchallenged and timeless discrepancies, imperfections and freedom of form should be applied to how society views the human figure as a whole?
Chen: In ancient Greece, people praised the artistic beauty of human bodies. No matter in which period of time, human bodies will always be the epic topic.