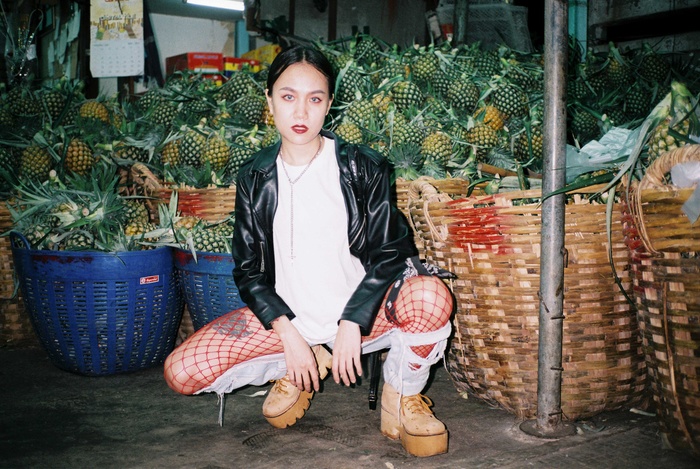 Duran Levinson is a 28-year-old photographer who likes to spend most of his time travelling in Africa and Asia. Based in Cape Town, South Africa, he prefers to use him 35mm film camera when travelling, and enjoys taking portraits of young people who break the traditional mold. We were captivated by his recent photos involving lots of neon lights and punk hairstyles, so we reached out to him to know more about his trip to Bangkok.

Lola Who: Hi Duran, can you tell us a bit about yourself?
Duran: Hello, Im Duran, coming from Cape Town, South Africa. Im a cinematographer, film photographer, and I spend my time working in the South-African film industry and travelling taking photos.

Lola Who: Are you self-taught, or did you study photography?
Duran: I have an honors degree in cinematography and I went to film school. I only started taking film photography seriously about 2 years ago, and now it has become a major part of my life and my creative endeavors.

Lola Who: Why did you choose to travel and shoot in Thailand?
Duran: I was travelling in Asia for two months and decided on Thailand as the first stop on my travels. I had a chance to discover new countries and burn through dozens of film rolls, before moving on to Hong Kong and South Korea. The project Streets of Bangkok was made during a month in Bangkok, Thailand, where I worked on various film projects, ranging from fashion shoots to documentary missions.

Lola Who: How long were you in Thailand and what was your experience like?
Duran: Thailand is such a great place, and Bangkok is a real gem. It’s got all the grit mixed with culture, tradition and style. So it makes a great place to go for photography, and I was able to be able to shoot a wide range of people during my time there.

Lola Who: Was there anything that surprised you about the Thai youth culture?
Duran: The culture is so rooted in traditions which are amazing but everyone has adapted to the modern, and turned to the West for fashion and pop culture, for better or worse. The youth are very in tuned to what’s popular and I got to experience some great nights out when my friends in a New York hardcore band called Magrudergrind headlined a sold-out club show in downtown Bangkok. Thailand knows how to party!

Lola Who: Who are the people that we see in your photos, and how did you initiate contact?
Duran: I sometimes use my Instagram account to make connections and photo plans with people when Im going to a new country for the first time. I made connections with some good dudes, who helped me a lot. I always enjoy meeting new photographers and artists to work and collaborate with on my travels.

Lola Who: Where were these photos taken exactly?
Duran: Photos of the punks and tattooed youths were taken for a lookbook for a Bangkok label called Criminal Lax. I was commissioned to shoot for them, and I also then shot the punks and youth for my own project. The heavily tattooed men in the ghetto were taken in the Khlong Toei slum, which is the largest slum in Bangkok which is home to over 100,000 people. Around 20 percent of Bangkoks residents live in illegal squatter settlements all around the city.

Lola Who: And what about these tattoos? Can you tell us about the cultural meaning of tattoos in Thailand?
Duran: Yantra tattoo is a very ancient form and belief of tattoo, which dates back over 2000 years. Thais believe tattoos offer protection, good luck, and have a form of magic. It gets all very detailed and technical with various religions and beliefs of Buddhism involved. In Thailand, tattoos are spiritual as opposed to cosmetic in the west.

Lola Who: What were some of your favourite places in Thailand?
Duran: Bangkok is a wild city but it’s obviously overwhelming to spend extended periods of time there without enjoying what else Thailand has to offer. It really is an amazing country with some of the best islands Ive ever visited. I spent a week on Koh Chang a pretty big island about five hours from Bangkok. I got to ride scooters, swim with sea turtles, find hidden waterfalls and actually relax for a bit, it was good for my sanity.

Lola Who: Can you share an unusual or special experience youve had on the streets of Bangkok?
Duran: I suppose I should share something embarrassing. I managed to get locked on the 4th story on a roof in the early hours of a Sunday morning when it just started to rain. Inebriated, the only way to get inside the building or out of the rain was to smash the window. Long story short I ended up getting kicked out of a cab because I was bleeding a lot. Ended up walking out a hospital with ten stitches in my hand, watching the sunrise and going to take more photos I can’t remember taking.

Lola Who: And lastly, what does the future hold for Duran?
Duran: Hopefully getting to travel a lot more and tell stories within Africa. Im hoping to explore more countries and tell more stories from my continent.