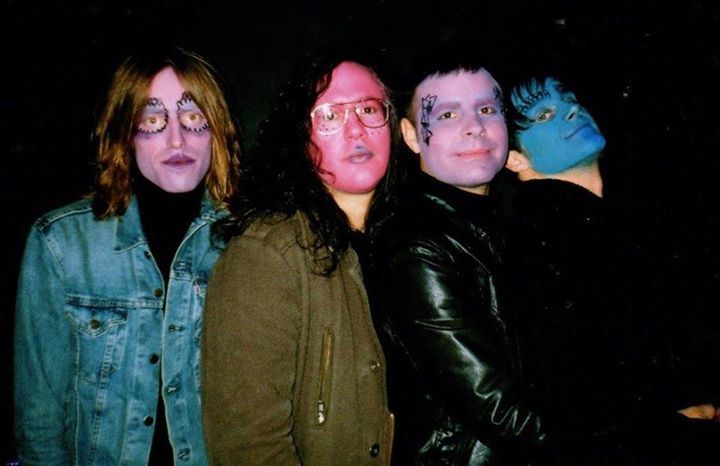 Some nine years ago, a trio of New Zealanders gave up the “borderline success” of their teen rock band and relocated to Berlin to start afresh. In their new environment, they shifted towards psychedelia and experimentation and re-emerged under the moniker Sun And The Wolf. The formation quickly settled in the European scene without never settling on their soundin that regard they will always be searching for new challenges. Their second album “Salutations” (2015), marked a departure from their rhythm and blues scented debut album “White Buffalo” (2011), and became more introspective, darker, and psychedelic. This year, they will be back in the studio, conducting further sonic experiments and taking their blend of alternative psych rock to new directions.

The three kiwis-Brodie, Peter and Mikeyare a merry bunch who have clearly known each other for years. We sat down with the guys after their set at Lido, where they supported the fellow Berlin band Gurr. Throughout the interview, they were completing each other’s sentences and poking fun at each other, except for the bass-player Achilles, who was an attentive but silent presence, for the most part, playing around with his guitar.

Lola Who: Support bands generally face the hard task of entertaining a crowd that is excited to see someone else. But tonight, I really wish you guys would’ve played longer!
Brodie: Thank you. It was good.
Mikey: It was our first show for like four months. It was a little bit
Peter: Weird?
Brodie: Kinda
Mikey: It wasn’t quite like, wrapped in, but it was a pretty good show.

Lola Who: I heard you have a new album coming up, is that right?
Brodie: Yeah, we’re working on it. We’re cultivating material at the moment.

Lola Who: How is that going?
Brodie: It’s going good.
Mikey: We wrote a song pretty much yesterday, and we played it tonight. It happens sometimes that a song comes really fast, and it’s just… Bam! Done. Other times there’s ideas that we can’t seem to finish.

Lola Who: How long have you been working on it already?
Brodie: The new record? Forever. But if you mean working seriously, with the intent to make a record, then not very long.
Peter: We haven’t really found the time to sit down and do it.
Mikey: Sometimes there’s a bunch of new stuff and then there’s nothing for a while.
Brodie: But I’d say right now we’re all pretty inspired creatively so we will try to move forward with it.
Peter: Definitely. By the end of the year, it will be out.

At the moment I’m inspired by wonk. We’re trying to make it as wonky as possible. – Peter

Lola Who: It doesn’t have to be musical, you can be inspired by anything I suppose.
Brodie: Like a piece of piping that is a bit out of the line. There is one pipe put up against a series of other pipes that are completely straight and this one is a little bit …uh. That’s the one we’re looking at. (everyone laughs)

Lola Who: So I take it that the new album is going to be somewhat different again, because when you compare “White Buffalo” your debut album, to the second one “Salutations,” they are both great but also quite different.
Brodie: Yeah, for sure.
Peter: I mean, I think if you did the same thing you would just get bored. So anything goes, really.
Mikey: The best stuff is something that is almost funny to start with. That has a funny bass line or something, but then it all comes together.

Lola Who: I read somewhere that your sound got a bit darker on “Salutations”. Can we expect your next album to be funnier… or darker?
Peter: Did you think Salutations was dark?
Brodie: Salutations was pretty dark.
Peter: I wouldn’t look as Salutations as  dark, I’d say more…
Achilles: Introspective?!
Brodie: Introspective, that’s a good word to describe it.
Mikey: There’s a couple of songs that are kinda dark, isn’t there? The Fishermen, for example.
Brodie: Anyway, for the upcoming album we are trying to find something new again.

Lola Who: Tell me the story of the band. I know the three of you come from New Zealand, you moved to Berlin, and picked up a new bass player
Mikey: Yeah, we picked up that hench over there (pointing to Achilles).

Lola Who: Achilles. who’s sitting in the corner, not taking part… Hello!

Everyone waves at Achilles, Achilles waves back.

Brodie: He only speaks Greek. (laughter)
Peter: We went to high school together. We had a sort of, I wouldn’t say success
Brodie: Borderline success?
Peter: Borderline success, as like a teen rock group. And then we gave that up and moved to Berlin all together to start again as a band.

Lola Who: Why Berlin, specifically? I mean, it’s a long way from New Zealand.
Peter: It was a lot cheaper than moving to, let’s say, London. At that time at least. And there’s more excitement coming with it than if we moved to Australia, which is pretty much the same as New Zealand.
Brodie: That’s the death of many kiwi bands, going to Australia. Or going to London, something like that. I think if we’ve gone to London we would have been chewed up and spat out a long time ago. It’s such a back-breaking place to be. Not that Berlin hasn’t had its moments of testing us….

Lola Who: That’s a long time. We all know Berlin is a transit city for many, how did you make it last?
Peter: We just didn’t let go.
Mikey: Yeah, we wouldn’t let go of it.
Peter: We fell into life here. Got jobs and everything. Berlin is a hard place to leave, I think.
Brodie: But yeah, you’re right, people do sometimes come here for like six months.

We fell into life here. Got jobs and everything. Berlin is a hard place to leave, I think. – Peter

Lola Who: And then go back where they came from, which is quite easy to do, but to establish a life here is obviously much harder. But you speak German as well, right? That makes things easier I’d say.
Peter: I think it had to do with the fact that we landed jobs that were super nice.
Brodie: Yeah, we speak German. It definitely does make things easier.
Peter: It was a long road, though! I still take lessons.

Lola Who: Berlin is undeniably the place to be when it comes to electronic music, but is that the case for a guitar-based band?
Peter: Probably not that great, actually.
Mikey: It’s good, good for keeping the costs down, for example. If it’s for the music scene, I’m not sure.
Brodie: Rehearsal rooms used to be cheap
Peter: There are places like the 8MM bar, where everyone’s associated with 8MM music. But that’s basically the only place I can think of that’s doing good things for our kind of music scene.
Brodie: It’s a good place to be based when you tour. To drive around in a van across Europe. We just went to play some shows in Greece and Bulgaria. Achilles, our bass player  what’s up, man? – he booked us a tour-holiday. We played three shows over the course of a week. But that’s just an example of how easy it is to go somewhere. We played some sweet shows to people who were really receptive, very open-minded.
Peter: In Bulgaria, especially. There’s a place called Plovdiv and that was one of our best shows, I think.
Brodie: A very bizarre little club. But the best promoter!
Mikey: They just love that you’re there and they are really into it. They really look after you.

Lola Who: Berlin is quite spoiled I guess; pretty much every band has come to play here at some point…
Peter: It’s business as usual. Another band, and another band and another one…. Get through with it.
Brodie: The time I noticed this the most was when we played with A Place to Bury Strangers. We played in Hamburg and Cologne, and they were really great shows, the people were receptive. And then we played in Berlin, and the crowd was very standoffish, we didn’t get much feedback. All we got was some claps: clap-clap-clap. In the other two cities, there were people who wanted to talk to us and engage: “Hey, where do you come from? Oh New Zealander, so cool”

Lola Who: So what’s your next tour-holiday plans?
Mikey: I guess it’s America.
Brodie: No that’s business, business only. I don’t know, maybe South East Asia? (everyone laughs) Vietnam, Cambodia… We should look up some Cambodian booking agencies. Singapore.
Mikey: We like to go to strange places no one ever goes to.
Peter: Somewhere in Africa would be cool. East Africa, Zambia

Lola Who: Well, I hope promoters in those countries are reading this interview! Anyway, I was wondering, who took the picture on the cover of Salutations?
Brodie: Mikey’s mom, probably.
Mikey: That’s me when I was a little kid, on my bike.

Lola Who: No way! That’s amazing.
Peter: It’s a pretty good cover.
Mikey: We didn’t have an album cover, and it was Peter’s wife  there’s that picture on the mantelpiece in my house  and his wife asked why is that not your album cover? So I was like, “Yeah, sure.” Just put a flag in the back

Lola Who: So it was a visual statement that came spontaneously… And also recently, you also released a new video that’s pretty visual…
Mikey: That was just a case of let’s take all the ideas we have and stuff them in one video. Let’s put facepaint on! Let’s wear crazy outfits! Let’s do this and that
Brodie: For the next one we have to go back to the thinking room.

Lola Who: You have been playing together for quite a while. What’s the greatest struggle you’ve been through as a band?
Mikey: Puberty when we started growing hair in strange places. (laughter)
Peter: When my voice got deeper. (everyone laughs) We had so many songs that were like: la la la (singing in a high voice). It’s a shame.
Mikey: Possibly moving over here. For me, anyway.
Brodie: Finding ourselves, all together. But the whole thing is a fucking struggle, you know. To keep on seriousness, to keep on pushing and staying true to ourselves and to stay true to our plait as musicians. To keep what we have together, it’s always a struggle I think. You are fighting with life, with jobs
Mikey: Being an adult, getting organized.
Peter: Finding the time.
Mikey: Getting in the same room together.
Peter: Life gets in the way sometimes.
Brodie: But in the end, we all want the same thing.
Peter: We all want the same wonk.
Brodie: We all wonk the same thing. (laughter) But what we wonk and what we have are sometimes two completely different things. Wonks and needs, basically.
Mikey: Wonks and needs! Everyone laughs, Mikey writes down “wonks and needs as a note on his phone while Peter and Brodie start singing pop songs with different lyric such as “So tell me what you wonk, what you really really wonk.

Lola Who: And what’s up with Achilles in the corner? How did you find him?
Peter: He’s not allowed to talk unless we tell him to. (laughter)
Brodie: We bought him in Greece. (laughter)
Peter: Through a friend of a friend.
Brodie: I met Achilles through a friend a long time ago. Back then he was playing this guitar that had bats on it, and I think it had five strings also, am I right? (Achilles nods smilingly)
Peter: Brodie saw his guitar and he was like, “Yes, this guy’s in.”
Brodie: He was a member of the band from the very first band practice, which is amazing. We scouted a few bass players but from the minute we saw him, we knew.