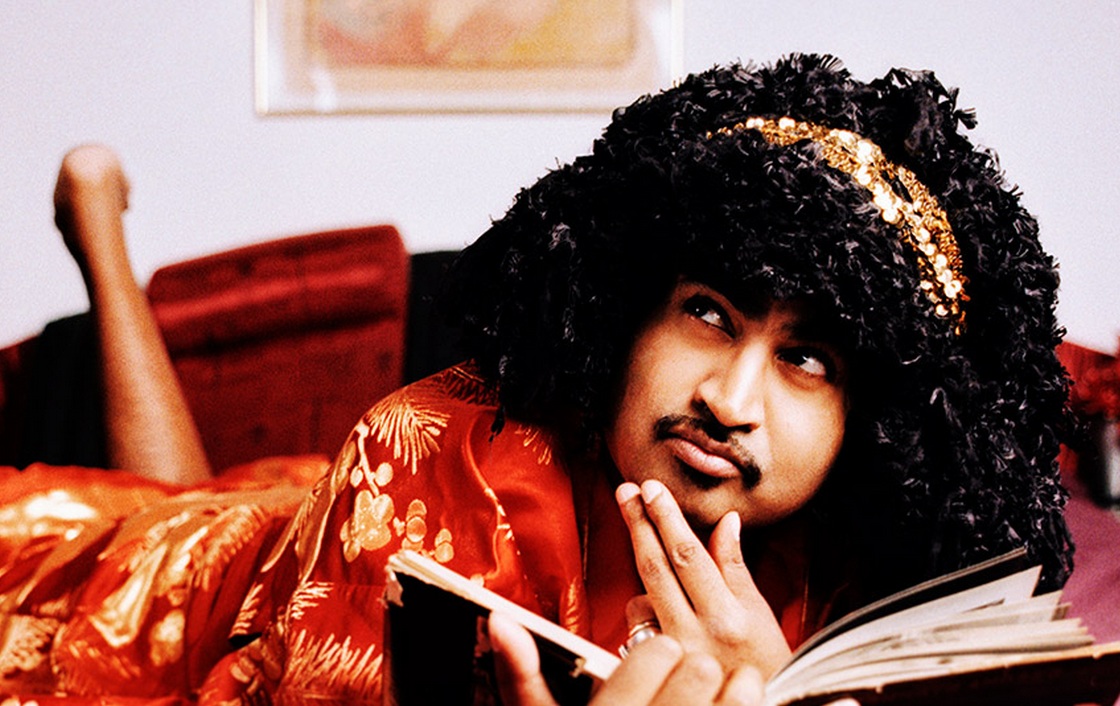 King Khan & The Shrines is really absolutely great, and we at Lola Who, cannot resist Arish Ahmad Khan’s soulful and psychedelic garage rock n’ roll. If you’re still wondering how you can make something new out of something old, then look no further. The ultra charismatic singer knows how to read tarot cards, will take you on a cosmic journey with Sun Ra, and has some serious some butt cheek power! We caught up with him at By the Lake Festival in Berlin and talked about being a teenager in Montreal, preserving the essence of rock n’ roll, and having low hanging balls. Lola Who: You have been playing music for 20 years now. How did you guys keep it all together?
Arish: Metamucil. The music and lifestyle of GG Allin. The spirituality of Sun Ra and Alice Coltrane. And the decadence of Nerothat guy who used to eat grapes off tiny little boys listening to Sunshine Reggae. I guess what’s kept me together is the dance of reality from the Alejandro Jodorowsky. I believe that dance has been shaping where and what I do. It’s a dance of reality. It’s like having a crystallized vision. You know what path you have to follow, and when you are following that path, then everything falls into place in a beautiful dance. And then things that you would have never imagine are opening up for you. So I’ve always been following that dance, subconsciously and consciously.

Lola Who: Can you tell us more about your spiritual vision, and how rock n’ roll influenced that dance you’re talking about…
Arish: I think that rock n’ roll has always been something that breaks all boundaries. It’s the perfect expression of freedom and a celebration of life. So I think that’s a religious thing to me. I was lucky to be a part of a greater family, a chosen family. We chose to be each other’s brothers and sister. I don’t know what was in the water in Montreal… There was Demon’s Claws, Mark Sultan and myself, Bloodshot Bill… These are the people that are deep brothers of mine. Everything they did was amazing and broke boundaries. We also did a lot of bad funny things… And then cocaine ruined everything. Yeah, it certainly did. It’s fucking disgusting. It really makes me angry to see how much cocaine has destroyed a group of peopleand it’s not even real cocaine. It pisses me off because it was an amazing music scene when we were teenagers…

You know what path you have to follow, and when you are following that path, then everything falls into place in a beautiful dance.      – Arish Ahmad Khan

Lola Who: When was that exactly?
Arish: Like in the early 90s. There was a great comic scene and punk rockers. We did a lot of LSD, a lot of mushrooms and smoked tons of dope and created tons of chaos. It was amazing. But then, the fucking coke dealers came in, and suddenly all of that magic was just drained…

Lola Who: Is that when you decided to move to Berlin?
Arish: There was a reason why I left Montreal… and that’ because there was a lot of really bad drugs going around. And then, my first daughter was born in 2000 and that’s why I moved to Germany. Obviously also because of my wife, who I fell in love with 1989. And the Döner kebabs,  the schnitzel, the beer…

Lola Who: And how did Berlin influence your sound?
Arish: I kind of like that I don’t belong to a specific scene in Berlin, so I can just work on my things. Lately, I’ve been doing a lot of art. I made the Black Power Tarot cards which was a collaboration between myself and Michael Egan of Belfast, an artist who worked on Game of Thrones, and also Alejandro Russki. So that’s was kind of a life-changing thing. Right now, I’m working with the Louisiana Chapter of the Black Panthers and they really love the tarot cards. So the project is part of an exhibition that is associated with the 50th anniversary of the Black Panther Party. I also did a soundtrack for a film called “The Invaders” which is about black power and about a more radical group that was formed in Memphis. I’ve been working a lot with the leader of that group, John B. Smith, and he kind of became a mentor to me. He, in fact, was working hand in hand with Martin Luther King, because Martin Luther King was so impressed by their work. And anyway, I was chosen to do a soundtrack for this documentary film.

Lola Who: Where does this fascination for the Black Panthers and the black power movement come from?
Arish: My father came to Montreal in 1963, and was working as a university professor at UQAM. When I was 10 or 11, he told me about that time when the Black Panthers came to the University and gave a speech, and how all of the white people in the audience were kind of shitting their pants, and how powerful the black power movement was. And he also gave me Malcolm X’s autobiography when I was a kid. I mean, growing up Indian in Canada, you’re still a total minorityyou’re a visible minority. I’ve always been an outsider, so I’m sensitive to things regarding racism.

Lola Who: I feel that there are a lot of similarities between Montreal and Berlin. Both cities are very creative and young…
Arish: Every city can be creative, so I never really try to compare. I try not to brag about Berlin because I don’t want people coming here and filling it up. And you get that all over the place. I used to have such a great time in Oakland, and now Oakland has been totally gutted. San Francisco has been gutted. New York City has been gutted. All of these great hubs of creativity have all been raped and pillaged by these fucking rich people that come in and then, you know, occupy. They occupy our fucking places.

Lola Who: Is that like, your alter ego?
Arish: No, that’s actually not. I really like it. I mean obviously I have a stage persona, but it’s not that far away from my actual real self. That’s why I drive my children crazy.

Lola Who: You guys have been playing music for almost twenty years now. What’s in the future for King khan and the Shrines?
Arish: At this point, I believe that what I do is almost like social service rather than actual entertainment because I think that savage rock n’ roll has been obliterated by stupid pop music. Pop music just makes people dumb. So I have to create this kind of music to assure that the future is secure for kids who appreciate underground rock n’ roll. And there’s a huge difference between the kids who appreciate that. You know, when we tour in the U.S., either with BBQ or with the Shrines, we get tons of little teenagers coming out and saying stuff like, “I’ve been listening to you since I was 12 years old, and you guys are my favorite band.” Those kids are the ones we’re ought to save. And as long as those kids keep coming to our shows, then I have no problem getting old. It’s great. My balls are hanging a little bit lower every day, and I really dig the feeling of putting tea tree oil on them, and getting that wind all around it.