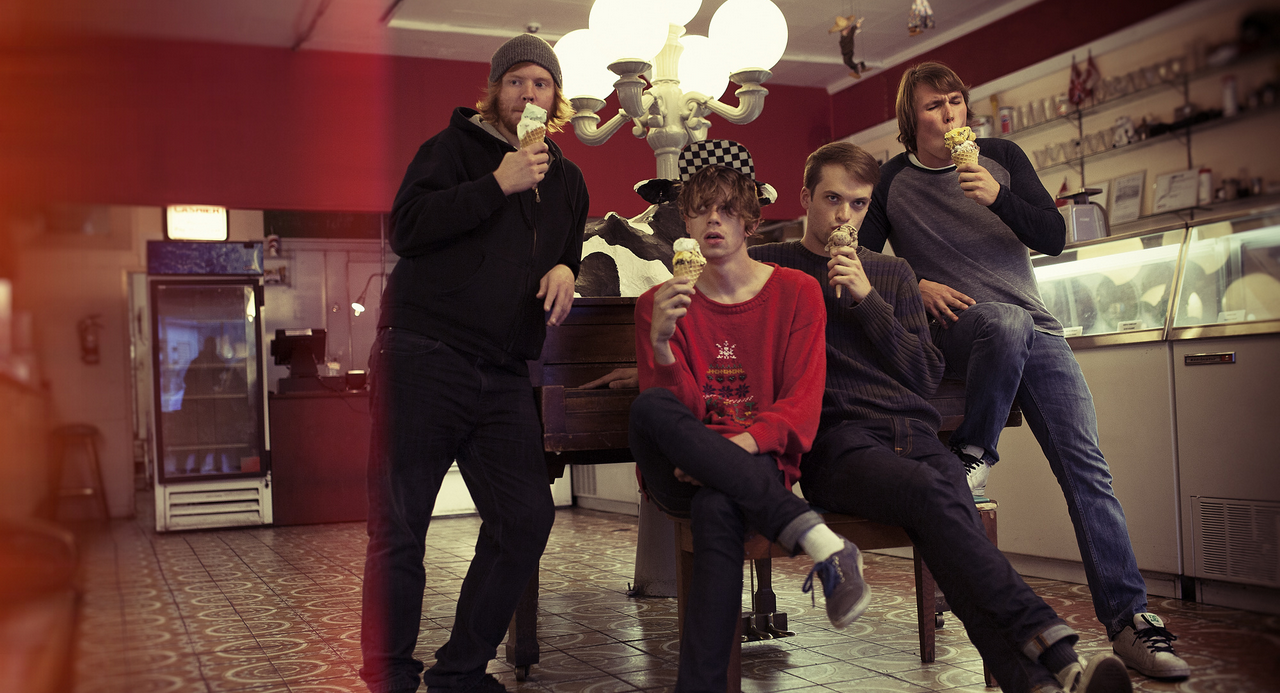 Nine years ago in 2006, 36? began in Taylor Cochranes Calgary basement. At the time, Cochrane was seventeen, on too much ADD medication and full of musical ideas. He self-released three albums under 36? before the project really took shape last year and morphed from a solo project into a four-piece band, adding Ryan Kusz, Mike Malkin and Scott White. The four worked together on what became the critically acclaimed album Where Do We Go From Here? The album is a manic, shape-shifting journey of sounds and styles thats consistently catchy and compelling. If you havent heard it, do check it out. For their first Lola Who interview, Tom Cochrane tells us about their new EP Tiger Tails,  what hes been listening to lately, and how hes not crazy anymore.

Lola Who: What can you tell us about your new EP ”Tiger Tail”? Your website calls it a colouring book/EP. That sounds fun!
Tom: ”Tiger Tail” is a collection of recorded material that we have been touring on for some time. It’s an EP of crowd favourites. This one is for the fans. Subject matter shifts in seriousness throughout; ranging from comically banal topics such as stealing ice cream, to heavy recounts of hopeless drugged out memories, to that feeling of contentment you get in coming to terms with falling to your death.

Lola Who: Whats your recording process like? Do you mostly use a home studio?
Tom: Our final stage of the recording process usually involves an amalgamation of recordings set up by myself and our drummer, Ryan Kusz, at our separate houses. For this EP, we recorded the drums at Ryan’s place and everything else at my house, and we both mixed the record together.

Lola Who: Taylor, youve described yourself as a real studio rat. Is the production process at all integrated with your songwriting process or do you prefer to keep the two separate?
Tom: I will write everything in the studio as the initial demo is being recorded. Usually, I will have a very specific idea of how it should be mixed. I find that the production of a record makes up for most of the feelings you get while listening to a song. I love producing and mixing, and it’s totally married to the writing process as far as I am concerned.

Lola Who: How was the transition from solo-studio-project to live band? How did it change your music?
Tom: Everyone in my band is way better at playing music than I could possibly be. I can now write music that I can barely play and watch it come to life. Its pretty amazing. Everyone adds such a cool vibe to the sound.

Lola Who: Ive read that 36 is a number that you sort of developed this fixation on and started recognizing everywhere. On ”Where do we go from Here?” there is 36 seconds of silence before the album turns to this noise-rock, almost musique concrète outro. Can you tell me what “36?” means to you at this point. Why is it a question?
Tom: 36 originally came into my life in my final years of high school. I was either on 36th Street, or the time was 4:36, or there was 36 people at the recital, or someone was turning 36, etc. Obviously it was a product of my subconscious searching for patterns, but at the time I believed it to have some sort of divine integration into my life. The question came from my desire to understand what the reason was that this integration came to be. Ill still always notice the number around these days, and it always catches me off guard. But I’m not crazy anymore ; )

Lola Who: You were quoted saying about your very eclectic style, when Im writing a song, my influences are different every single time, it just depends on what Im listening to at the time. So what have you been listening to lately?
Tom: Right now, I have been listening to a lot of Unknown Mortal Orchestra, Father John Misty, Wavves, Animal Collective, Nao and Akron/Family.

Lola Who: How would you describe the Calgary music scene? How have you been influenced by it or Calgary in general?
Tom: Calgary is an artistically fruitful city. At one point, I was often surprised by the quality of emerging artists from this city, but now its just the norm. I’m constantly inspired by my musical friends and the ideas they come up with to manipulate noise. This city is a beautiful place for an artist.

Lola Who: Are there any non-musical works that inspire or inform your music?
Tom: Social constructs, religion, love, sex, politics, death, pain, everything unknown, and drugs.

Lola Who: What are your plans for summer 2015?
Tom: Lots of writing, preparation for a 2016 LP, a Split EP to be released with a sweet local band called The Ashley Hundred in August, and preparation for a larger European tour in September/October.